Why My Vote Matters 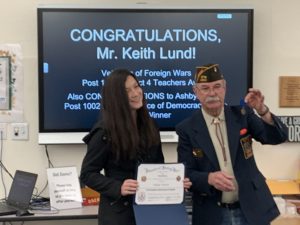 Ashby Trotter was the winner of the VFW Post 1002 “Voice of Democracy” essay contest this year — this is her essay submission for the theme “Why My Vote Matters.” By Ashby B. Trotter —   Every action has a reaction. A theory coined as “the butterfly effect” posits that a miniscule action can result in a significant, world-changing result. This premise states that a butterfly can flap its wings in one place and cause a hurricane on the other side of the world. The corollary of the butterfly effect is that the minute changes that people make, when aggregated among millions of people, accomplish true change. How does this theory pertain to voting? What follows is an analogy between the butterfly effect and the correlating steps our nation has taken to give ​all​ people the right to vote. In Colonial America, James Otis made the bold statement that “taxation without representation is tyranny”; ​a butterfly flaps its wings. ​This phrase becomes the rallying cry of the revolutionaries at the Boston Tea Party and a new nation is formed on the basis of personal freedom and the voice of the individual; ​a breeze forms. In 1920, Susan B. Anthony and her predecessors win the fight to give women the right to vote; ​winds start to blow. ​Later, Martin Luther King Jr. and civil rights groups are victorious. The Fifteenth Amendment is etched into our Constitution saying, “The right of citizens of the United States to vote shall not be denied or abridged by the United States or by any State on account of race, color, or previous condition of servitude”; ​a hurricane is created. Throughout the United States’ history, citizens have fought for their right to vote, their right to choose. Almost all the internal struggles in the nation have been about others suppressing choice or quelling freedom. Are we not indebted to the brave men and women who gave their lives to grant us a radiant future of choice? Exercising our right to vote is a tribute to the people who could not do so before us, to every revolutionary and every advocate who fought to create our right to choose, and to every soldier who fought to protect it. Voting also serves as a beacon for change to those who still do not have a voice in other countries. Another example is our recent presidential election. If “Did Not Vote” was on the ballot, only eight states had voter turnouts that were high enough to defeat it. Only fifty-five percent of voters exercised their freedom of choice in 2016. A higher voter turnout would have substantially impacted election results. My vote matters​ because every action I take makes a difference. Combined with the decisions of others, there are consequences, both when we act and when we do not act. Each and every one of us is a potential butterfly. We all have the power to make change; together, our voices can create a hurricane.
Publisher