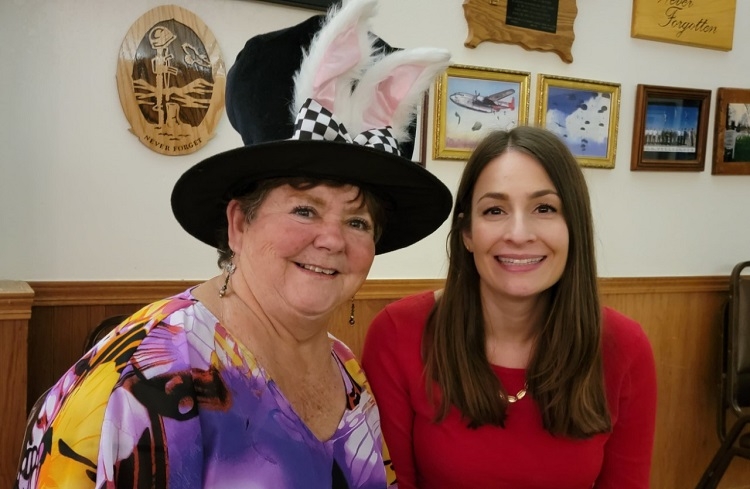 Jann Carlucci may be a familiar name to many. Over the past 12 years, she's spoken to numerous blood donors at the 37 blood drives she has chaired as a member of the Banner Churchill Community Hospital Auxiliary organization.

Blood drives are held at Banner Hospital three times per year for the Vitalant Blood Center, formerly known as United Blood Services, and BCCH Auxiliary volunteers assist with each one. Nicole Jo, Vitalant's Senior Account Manager provided some statistics. “For the last 36 blood drives here, Jann spent eight to ten hours per drive making phone calls plus five hours on the day of the blood drive, equating to 1,480 hours donated by her. For those same 36 blood drives, 2,963 units of blood were collected averaging 82 units per drive. A total of 8,890 lives were saved as a result. That's how amazing and important this project is.”

Jann started running the blood drives because, although she wanted to volunteer with BCCH Auxiliary, she didn't have set hours or days that she could dedicate. “But I did have time at home where I could make phone calls, so that's how I donated most of my time to them. It was fun, advising the donors of what openings we had, and setting appointments for them. It got so the donors just looked forward to hearing from me.”

Jann described her experiences saying, “Our community in Fallon is so very generous with donating, and they would be so happy to hear from me, telling me that they were waiting to hear from me. Donations here are more than even in the bigger cities like Reno.”  Nicole added, “It's one of our biggest blood drives in all of Northern Nevada. We get a fair number of new donors, but the majority here are repeat donors. We use both the Tahoe Room in the hospital, and the Bloodmobile – we need both.”

Nicole described some changes that are coming. “Vitalant now has their Contact Center reaching out to donors, so that's a big change and it works great for the larger blood drives. But when you have a unique volunteer like Jann you get a personal touch. She developed a one-on-one relationship with them and has been one of our premier volunteers. You don't get that with an automated system.”

The new blood drive chairperson will have a bit less to do, as making the phone calls was most of Jann's work. That person will work with Nicole to learn the rules, duties, and responsibilities. “We'll discuss how to make the blood drives work better in the new iteration. We will still run three drives per year and plan to staff them in two four-hour shifts per drive. Due to Jann's efforts, the drives are done on a regularly scheduled basis which stabilized the entire project.”

At the blood drive, the chairperson will also make appointments for return donation times as Jann did. She said sometimes she would have 40 or 50 people signed up for return visits and would then call them in advance of their appointment as a reminder. “You're scheduled for a 9 a.m. appointment, will that time still work for you?”

Nicole said, “I know the hospital is very dedicated to the project, even when we went through COVID. Thanks to Jann and BCCH Auxiliary, we didn't cancel a single blood drive during that time. We moved it to the Eagles Hall to be out of the way of the hospital. We still needed the blood, so we persevered.”

Jann has words of encouragement for the next chair. “Good luck. After 12 years it's not as much fun as it used to be for me. However, I am more than happy to help them and to be a resource for them. Volunteering is supposed to be fun, and sometimes you just have to reconsider when it's not that much fun anymore. Twelve years is a long time, after all.”

Stuff N' Such Looking for Cashier