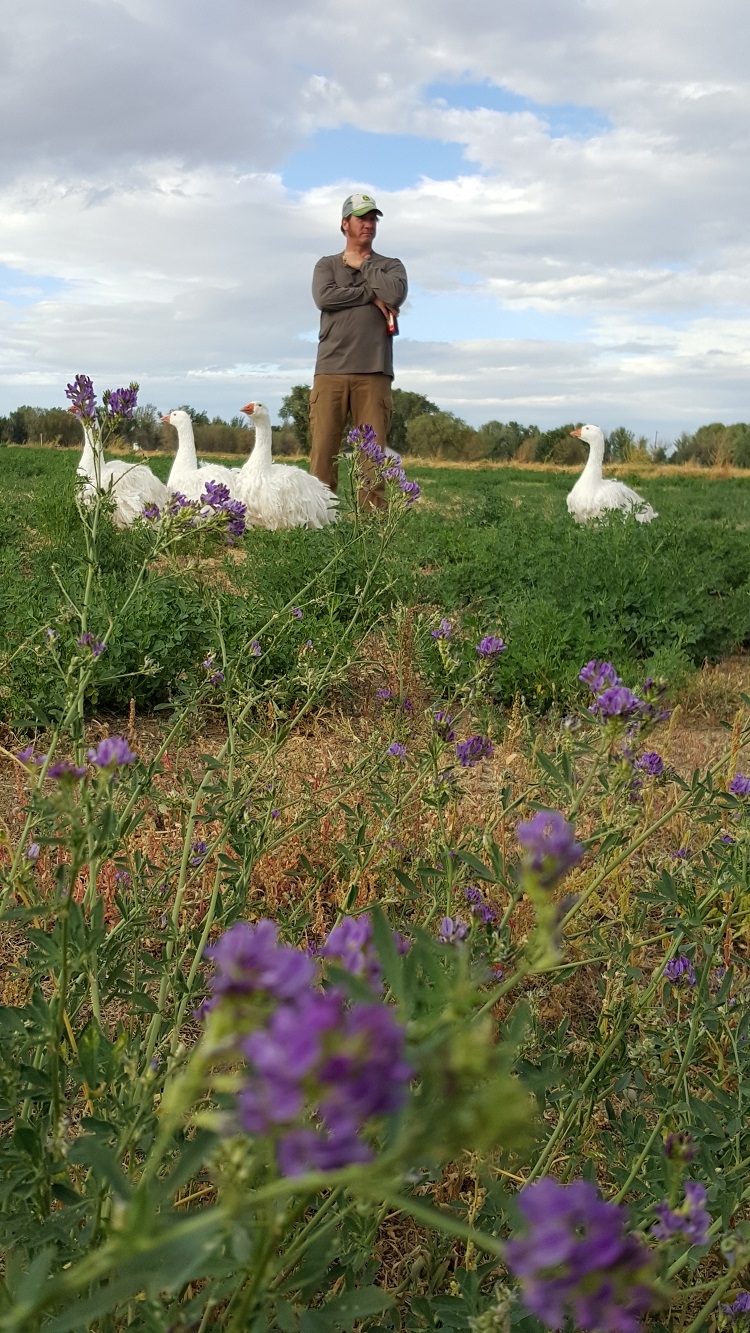 Jaime Sammons
An Ode to Alfalfa

Almost overnight it seems, the Greenwave is coloring up and transforming our valley. That alfalfa we all love is sometimes referred to as the “Father of All Foods” for good reason. Medicago sativa is in the family Fabaceae, gardeners and chefs love this legume family that includes beans, peas, and clovers. In other parts of the world and often in ancient writings, alfalfa is instead named Lucerne. Whatever name you give it, we are lucky enough to drive by beautiful fields of it every day. More than just a pretty plant, alfalfa deserves greater recognition as an integral part of human history and development. The origins are often hazy and are still being argued over but there is much evidence it originated in ancient Persia. From there it is said to have spread to Greece and then the Middle East. It is now grown on nearly every continent and was a major factor in American expansion westward. Often brought by immigrants, it reportedly began appearing in California from Mexico and Chile during the Gold Rush period. The high protein crop was recorded as being brought to Utah by Mormon pioneers from seeds originating in the British Isles. From Utah, it spread to the rest of the western states. Today, alfalfa hay is the leading cash crop in Nevada.

Alfalfa is most often grown as a perennial. The nutrient-rich, clover-like legume is feed for livestock of course, but also makes great food for guinea pigs and rabbits (welcome to the world baby Dahl bunnies, if you don’t have a Facebook account, you might get one just to see how stinking cute our head honcho Rachel Dahl’s Angora rabbits are). Critters aren’t the only Greenwave grazers, named also as an herb, alfalfa is a source of food and medicine for humans. Cooking is recommended in older stalks by the way. Health food stores carry tablets for sorting out all types of ailments. Young alfalfa sprouts are an easy find at any grocery store. They are a popular sandwich and salad addition in this house.

If you don’t have an alfalfa farm, this plant or other clovers actually can be good to add to your home garden. They do like a bit of cool weather to get started, technically they are a cool-season perennial. Now or in the late fall, distribute the tiny seeds on top of the soil and pack them down. Look for seeds that contain an inoculant if you can, it just helps get them started. Keep them well-watered and weeded till they get established. Once they get going and they develop their fragrant purple-blue flowers, you can chop them down to a few inches above the crown. Then add what you chopped to a new bed you plan on tiling or even get in the regular practice of scattering clippings (like local farmers, you’ll get several cuts per season) around as a top-dressing mulch. This “green manure” will break down and help fertilize your soil. Microbe activity will also increase. Alternatively, add to your compost pile, it sure helps heat things up.

Alfalfa is good for pollinators and bees are needed to pollinate the alfalfa. The alfalfa flower however is a little tricky, the keel of the flower trips when visited to help distribute pollen. Honeybees, not surprisingly prefer not to be struck in the head repeatedly, so older bees develop a method of feeding out of the side of the flower. Pollination is not completed when this happens. Young honeybees who haven’t learned this trick are farmer friends. Better at pollinating solitary alfalfa leafcutter bees. So much so, some farmers set up small tunnels around their farms to encourage them to take up residence. Big alkali bees that you might see emerging now from small holes in the ground are also excellent alfalfa pollinators.

Alfalfa is a smart crop for our fields. The deep extensive roots that alfalfa develops can sometimes reach 6-10 feet or more underground making it good for erosion control and great at drought resistance. It does not like wet feet. Kevin and I attended a lecture a few years back at the Churchill County Museum that was focused on the historic ranches in Western Nevada. What struck us both was how vital alfalfa was in the development of the state. An interesting story, UNR type Dr. Holly Walton-Buchanan shared was how originally early Nevada farmers often overwatered their alfalfa and had less than successful results.

If you haven’t attended a lecture at the museum, absolutely do, they are always super interesting and informative. The next one will be Thursday, April 28th at 6 p.m. The speaker is avian expert Michael Goddard of the Lahontan Audubon Society, “Birds of Lakes and Marshes” is the topic, kicking off the Spring Wings Festival. The chance to hear Mike speak is not to be missed.

Chives are easy and bees love them.