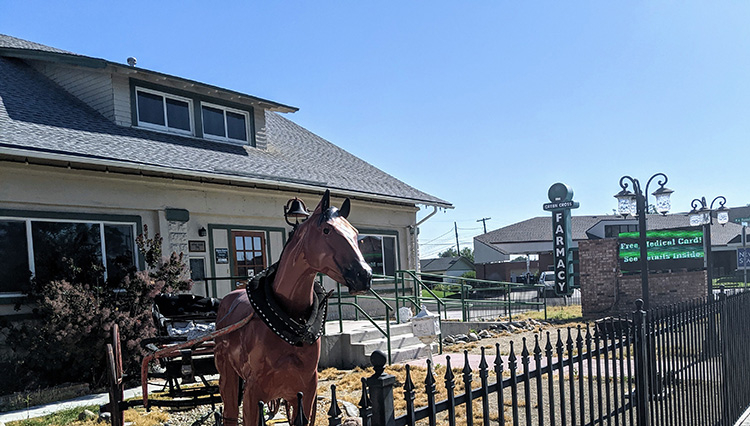 In response to recent “Pot, Guns, and Money” articles published in the July 16 and July 9 editions, questions continue to arise regarding marijuana use and growing in Churchill County. Additionally, the City of Fallon has been petitioned to expand the sale of marijuana to include recreational marijuana sales.

As stated in the previous article, Nevada law that states that growing and cultivation (planting, harvesting, drying, propagating, and any further processing or manufacturing) of marijuana plants for recreational use is only allowable when the individual lives more than 25 miles from the nearest “licensed dispensary.”

As of July 2020, several of the laws outlined in Nevada Revised Statutes (NRS) have become obsolete, and new regulations now govern recreational marijuana use, cultivation, and sales within the State. However, NRS language still does not delineate between a medical or recreational dispensary. According to Morrison Law Center in Las Vegas, this technically makes cultivation in Washoe and Clark counties virtually prohibited for most residents and unlawful for many Nevadans living in rural counties.

Medical marijuana patients do have a bit more leeway when growing their own plants, but it does not give them carte blanche. Medical users within 25 miles of a dispensary are permitted to cultivate marijuana only if the dispensary cannot supply it to the patient, if they are too ill to travel to the dispensary or lack transportation, or they were grandfathered in as a cultivator before July of 2013.

Specific cultivation rules apply to all marijuana growers. In addition to the prohibition of growing within 25 miles of a licensed retail store, plants may not be visible in a public place or from the road. Also, cultivating pot on property not owned by the cultivator requires the owner’s permission. The penalties for violating this regulation range from misdemeanor charges that include fines and jail up to felony charges that include 1-4 years in prison and fines up to $5,000.

Widely unknown is the legal prohibition of gun licensing and purchasing for persons holding a medical marijuana card. While this may sound unconstitutional under the Second Amendment, the 9th U.S. Circuit Court of Appeals upheld the law when it was challenged by a Nevada woman in 2011. Marijuana is still illegal under federal law, and a marijuana user (both medical and recreational) is categorized as a drug user and therefore considered a prohibited person from owning a firearm. Circuit Court judges, in a 3-0 decision, determined it “reasonable for federal regulators to assume that a medical marijuana cardholder was more likely to use the drug and Congress had reasonably concluded that marijuana and other drug use ‘raised the risk of irrational and unpredictable behavior with which guns should not be associated.” [18 USC § 922(g) & (n)]. While this ruling is broadly challenged, the law remains in effect.

Medical marijuana cardholders may possess up to 2.5 ounces of usable marijuana in a two-week period instead of the recreational user limit of 1.0-ounce or 1/8 ounce of marijuana concentrate or hashish. Hashish is concentrated cannabis made from the dried resin (“keif”) found on the tops of cannabis. It can be used in edible marijuana products or smoked. If a user is caught with more than the limits, they can be charged with a felony.

All users should be aware of Nevada’s marijuana laws, such as the prohibition of using or smoking in public, with the exception of consumption within licensed cannabis lounges (effective October 1). It is also illegal to purchase marijuana on the street or from non-licensed outlets or drive while under its effects.

On a positive note, medical marijuana (which includes edibles and infused products) does not garner the 10% additional tax placed on recreational products.

As recreational marijuana use has become more prominent and legalization expands throughout the country, many citizens seek greater access. On July 18, a petition began circulating in favor of an ordinance permitting the sale of recreational marijuana in Churchill County. Posted on Facebook’s Fallon 411 by Nathan Joseph of Fallon’s Green Cross Farmacy, the petition implores residents to consider the positive tax benefits stating, “The city can get taxes up to 3% tax per transaction. This money can be used for improvements in the city. As of right now, Fernley and other jurisdictions are delivering recreational anyway. Support local and keep the taxes in Fallon.”

It is well-known that many local cannabis users go to Fernley to purchase recreational marijuana, and with them go local tax dollars. Additionally, many users, both with and without transportation, also purchase from prohibited sources or grow plants illegally. The petition cites increased tax revenue, business expansion, and safety concerns over those driving to and from Fernley potentially impaired. “As a resident, I find this to be irresponsible on the City’s part to not only take away opportunities from a local business,” stated Joseph in his petition, “but to allow that money to flow into other places and not stay here in Fallon.” In 2018 the Fallon City council members voted unanimously against expanded licensing for Green Cross, the area’s only medical dispensary, to include recreational marijuana sales.

The petition received mixed reactions, though most appeared in favor of the petition. Even so, getting the ordinance passed, despite the 411 responses, will be no easy feat. As cited in an Associated Press article, “1st Year of Nevada Marijuana Sales Smokes Expectations”, by Scott Sooner, as early as August of 2018, the legalization of recreational marijuana impacted more than just tax revenue. “Anecdotally, Douglas County School Superintendent Teri White said her district near Carson City had more problems with marijuana the first three months of the school year than she’d experienced her entire career,” wrote Sooner. “Churchill County High School (now former) Principal Kevin Lords in rural Fallon estimated student marijuana use has tripled in his district, including cases of edibles being distributed by adults.” Also, the North Central Narcotic Task Force reports that approximately 98% of the individuals arrested either have marijuana on their person or in their system.

Anyone wanting to have their voice heard on the issue is encouraged to contact their Fallon city council representatives and Churchill County Commissioners.

Fallon Resident 2021-08-23, 09:42 PM Keep driving to Fernley. Better yet, move to Fernley, if marijuana is central to your existence. People forget, but there are a lot more people NOT using marijuana- only 12% used marijuana in 2019 according to Gallup. That means 88% of us don’t care about having marijuana stores nearby. No thank you, don’t need it here.

Fallon Resident 2021-07-25, 08:18 AM If Churchill County allows recreational sales, I will definitely move out of Nevada. You do realize that even in large liberal states like California and Illinois many localities have opted OUT of recreational marijuana. This is the last straw for me, my spouse and I will take our full-time employment to benefit another state because we did not vote for this and do not want to live in a community that approves of this, either. A petition started by a person who will personally financially benefit should be ignored anyway.