The Adventure Doc -- My Son on the Camino 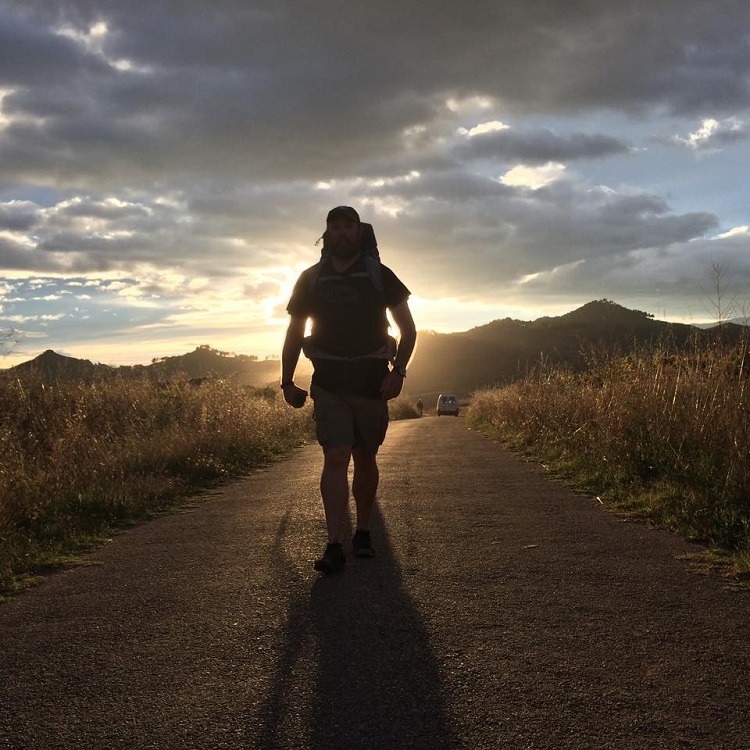 Lewis on the Camino

I thought about a number of different stories to write this week, from a lifetime of experiences, but like other parents who enjoy seeing our children healthy, educated, happy and safe I decided to write about my son and his experiences.

I have three children, now adulting on their own, and am proud of them. However, my son was in the Army and during his career, he was sent to Iraq for two long deployments. I was in Iraq myself during his deployments and spent time with him and his guys. We would meet in Victory Base Baghdad (VBC) or other forward operating bases (FOBs) where I would buy lunch on occasion and catch up with their news. It was difficult to say goodbye, as you never knew if it was the last time you would see them (him) alive. Once I went to their quarters only to learn his friend was killed earlier that day.

When he was out of the Army, after ten years’ service, he wanted to experience the Camino de Santiago – a large network of ancient pilgrim routes stretching across Europe and coming together at the tomb of St. James in northwest Spain. It is known by various names, Camino, Pilgrimage, Camino de St. James, and it’s the sort of thing people do to find themselves, or religion, or for any number of other reasons. I helped financially, but he accomplished the trek and wrote an article about his experience. With some editing, here is what he wrote…

It’s dark. You stir in a bed that isn’t yours. You hear a cacophony of cell phone alarms, foreign-sounding moans, and groans. All you want to do is go back to sleep. The bed is lumpy and has an identifiable aroma. It’s a bunk bed that has probably been used more than a hundred times that season before you got in it. Someone turns on the light to the large room you share with thirty to fifty other people.  You rub your eyes and think to yourself, “What in God’s green earth did I get myself into.”

You might think this is a scene from basic training in the Army or some other highly structured program, but you would be wrong. It’s something much more challenging. It’s the first day of Camino de Santiago and you have thirty-three more days to go.

The “clacking” sounds of hiking boots from people who’ve come from all over the world strike the cobbled streets as you set out conjure feelings of mystery and romance, like a scene from Casablanca. You expect to see Humphrey Bogart turn a corner in his iconic white tux.

Over 300,000 people hiked the Camino in 2017. As you sit in the café drinking Cafe con Leche in the early morning, it is not improbable to hear the jazz-like tones of someone speaking French nearby; or the frenetic cadence of a German speaker in the distance. One could almost hear Dooley Wilson play “As Time Goes by,” as you sit eating a buttery croissant with marmalade for breakfast.

The Camino is an ancient pilgrim route that leads through exotic locations. For example, the great city of Pamplona, where in July you can run with the bulls during the summer festival; and Burgos, where you can visit the tomb of El Cid, the national hero of Spain, the best Spanish General of all time. Or León, with the most extraordinary gothic architecture in all of the Iberian Peninsula, tracing its first settlement back to a Roman encampment in 29 BC. The Camino converges in the city of Compostela de Santiago, ultimately ending at the Cathedral of St. James, a massive two-tower building that looks like the entrance to some megalithic gothic castle more than a cathedral.

While you go through some of the most beautiful cities imaginable, it’s the small little villages that are the Camino’s heart and soul. Some people get caught up in the allure passing through cities, with the excitement of cars whizzing by and the beautiful architecture, so much they can miss the real treasure of the Camino. The landscapes of green rolling hills and valleys, the smell of fresh-cut hay in the endless farmland, or the sight of low rolling fog blanketing the valley floor visible from high atop grave mountain passes. Silence surrounds you - save the rhythmic crunch of gravel underfoot. From seemingly nowhere comes a friendly “Buen Camino,” as a fellow pilgrim passes you or stops to make pleasant conversation. That’s the life of a pilgrim moving from one town to the next – like Valcarlos, the first town you encounter in Spain coming from France, on the green route.

Valcarlos nestles in a small valley, flanked by large hills, while the Camino heads towards a pass in the Pyrenees Mountains. Roughly 11 kilometers from Saint-Jean-Pied-de-Port, Valcarlos is dotted with little whitewashed homes among the rolling hills of farmland, cow pastures, and outdated tractors. The smell from a nearby restaurant is intoxicating, Paella, Spain’s national dish, a meal of rice, various meats, seafood, and a dash of saffron that is simmered to perfection. The people are friendly, warm, and always taking time to show a wayward pilgrim the way to Roncesvalles, the next stop down the Camino.

Stopping in an outdoor café you put down the rucksack, which has become an albatross, and watch the sea of pilgrims walk by as you eat your meal. Their rucksacks span all colors of the spectrum with scallop shells making an almost inaudible clank as they dangle from side straps and rucksack pockets. Small national flags are sewn on jackets and rucksacks like a mini-United Nations all moving towards the same goal.

The last 18 kilometers for the day are mostly through the lush green forest and steep mountain paths that weave through the Pyrenees mountains like tiny conduits on a circuit board. The Citril Finch serenades the pilgrims as they pass pine, fir, beech, and oak trees scattered along the countryside. The lucky pilgrim may see the most elusive residents of the Pyrenees mountains, Golden Eagles, soaring across the sky searching for their next meal. Sounds, smells, the lack of human touch on the landscape, can be exhilarating. You realize it’s not just nature you have to contend with, but yourself as well. Walking long distances through the forest can make you feel like time is flowing backward. Exhausted, trekking unknown roads, the sensation that time has stopped, these can make the strongest of us long to quit.

Through the forest at the top of the mountain, you start to see signs of civilization. A small church, a road, more importantly – a road marker, pointing to Roncesvalles, 2.7 kilometers, downhill. Depleted from carrying the rucksack, which you have begun to call dirty names, hungry, and covered in sweat, there is a calm in realizing your day is almost over. A feeling of exuberance fills you, the preverbal pep in your step leads nearly to a slight jog. Earlier feelings of quitting wash away. The only thing you want to do is get there and sit down. Once you cross the courtyard at Roncesvalles there’s a large collegiate church looking more, at this moment, like the entrance to heaven. It is your stopping point for the day and, by far, the most satisfying part of the trip so far.

Checking in with your Pilgrim passport, the day is not done; there are laundry and shower facilities and a meal at the local restaurant. The three-course “Pilgrim’s Meal (salad, a bowl of lentil soup, and a variety of fish or chicken, not unlike a bad wedding party) satisfies like no meal ever has.

Nights on the Camino consist of checking your feet for blisters, reading the day’s emails, calling home, and looking at the travel guide to plan out the next day. You take stock of the day in another lumpy bunk bed, with another unidentifiable smell, and the sound of someone snoring in the distance. A smile crosses your face, knowing you will wake up tomorrow and do it all over again in a different town, with different people. Knowing there are thirty-three more days to go.