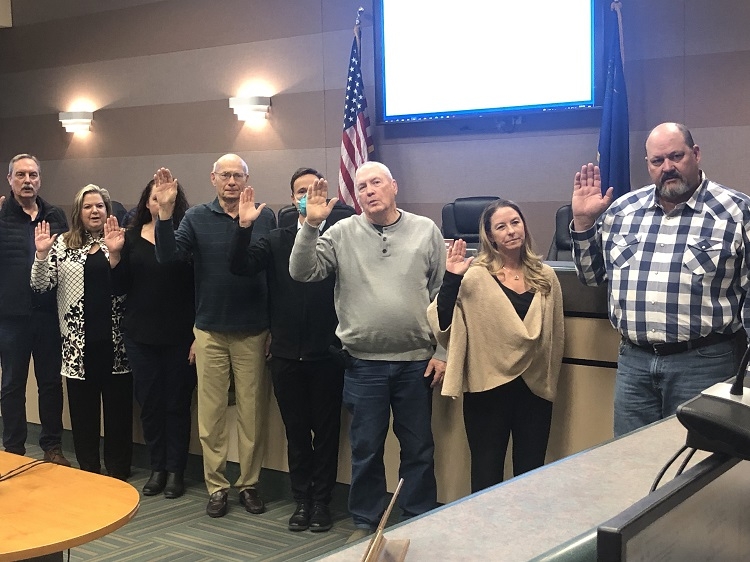 During its first meeting as an organization on December 8, the Central Nevada Health District elected its officers, adopted bylaws, participated in ethics training, and made a series of appointments.  Churchill County Public Information Officer Anne McMillin said in a press release, “The health district will fully implement services starting July 1, 2023, with public health preparedness, disease investigation, public health nursing, environmental health, and disease prevention in Churchill County, Mineral County, Pershing County, City of Fallon and through an interlocal agreement with Eureka County until they are legislatively able to join as a full member.” The slate of appointed board members is composed of representatives from each of the participating districts: Churchill County Manager Jim Barbee and Social Services Director Shannon Ernst, Mineral County Commissioner Cassie Hall and Mt. Grant General Hospital Administrator Denise Ferguson, Pershing County Commissioner Larry Rackley and Tyson McBride of the County Physician Center, City of Fallon Mayor Ken Tedford and Chief of Staff Bob Erickson, and Dr. Justin Heath as their Medical Representative. Mayor Ken Tedford was elected Chairman, and Commissioner Cassie Hall was elected Vice Chair, both will serve until January 2024. Appointments of Commissioner Dr. Justin Heath as Physician, Dr. Ted McDonald as Interim Health Officer, and Reno-based Arc Dome Strategies, LLC Manager Caleb Cage as Transition Manager/Interim Director were also made.  Ernst said, “This has been a long time coming. We started looking at this almost 15 years ago, and then the pandemic brought it to light. It can usually take three to four years to do something like this, but we were able to do it in a year and a half. It’s been a lot of work, and a lot of people are involved. Truly we couldn’t have done it in that time if it wasn’t for the partners from all the communities that were at the table and dedicated to the process. The state was standing behind us with the support we needed to make it happen right down to a response from the governor within 30 days who referred us to the legislative Inner Finance Committee meeting in August. The state board of health then approved our application in December. They saw that we were able to show that we had the capacity, the funding, and the agreements in place for approval to form the new district.” Nevada Revised Statutes govern the creation of health districts for counties whose population is less than 700,000. Pursuant to those regulations, the county was authorized to create the new health district. Churchill County Commissioners voted on November 16 to abolish its own board of health in accordance with NRS 439.383 and incorporate those services within the CNHD. Ernst said, “When you look at the transitioning, everything from Churchill County Public Health will be moved to the Central Nevada Health District. We are having a bit of a gap for services during this time, from now until July 1 because of all the board-approved name changes we have to make everywhere. We feel bad to have this gap, but hopefully how we have timed it so that no one will feel any issues. We’ll be back up and running with a new team of individuals to provide services. More self-testing is being offered for COVID and other things, and we are working with others to provide vaccines in the meantime. It’s a very detailed process, and there are about 15 different regulations governing this.” Her role is transitioning too as she continues to manage the county’s public health side. “They don’t have an administrator in-house yet, so I’m also working with the transition team to make sure everything is ready for the July 1 implementation. We’re excited we got approved, but now its boots to the ground to get all of the work done – policies, procedures, staffing, getting them in and trained.” Ernst said, “This is the first rural health district that has been approved in the State of Nevada, and only the third health district in the state. We have mapped this whole process out to help other communities do this in the future. There have been conversations with other rural counties that are interested in creating their own health district and they can look at our road map that is still a work in progress but will be done on July 1. I think this will be amazing for all of our communities. It’s looking at what the gaps in services are in our communities and what they really need. Rather than a blanket approach, it will be a community approach. We are pulling everyone’s resources and working toward the betterment for all of our communities.”