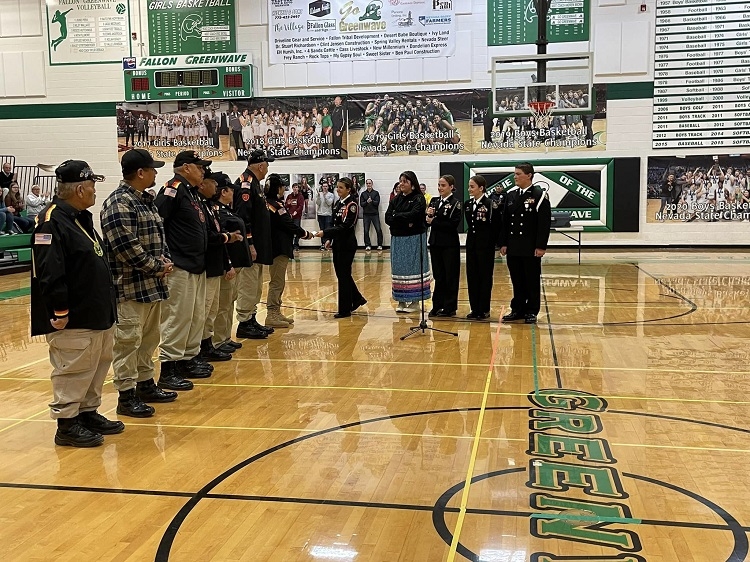 November is a time to celebrate rich and diverse cultures, traditions, and histories and to acknowledge the significant contributions of Native American people. It is also an opportune time to educate the community about Native American tribes, to raise general awareness about the unique challenges Native American people have faced both historically and, in the present, and how tribal citizens have worked to conquer these challenges. With the assistance of ChurchillCSD Title VI Indian Education Liaison Carlene Pacheco and other staff members, all the schools hosted events, conducted lessons, and taught students about Native American history, heritage, and culture.  As the Indian Education Liaison, Pacheco likes to raise cultural awareness throughout the school district by coordinating Native American events in each school that are different than the events planned the year before. This year, November has been jam-packed with a little bit of everything. A dance group from Pyramid Lake High School performed at E.C. Best Elementary School and Churchill County Middle School. They shared their beautiful language, traditional Pow Wow dance style, and culture with the students and staff. At Churchill County High School, the ROTC members did a penny drive and raised over $500 for the Pyramid Lake Veterans and Warriors Organization which presented at a school-wide assembly. CCHS student Kiley Gutierrez sang the Flag Song as the Veterans and Warriors Organization brought in the flags for their presentation. “Kiley said she wanted to sing the Flag Song for the entire school, and I figured this was a great opportunity and a good example of a student coming forward to represent her culture by participating in Native American Heritage Month activities,” said Pacheco.   Fallon Paiute-Shoshone elders and community members had a huge role in making Native American Heritage Month so successful. They came to the schools to read, sing, and teach the students. Elder Stephen Frank sang the Shoshone Flag Song in his Native language during the announcements one morning at CCHS, and elders attended Numa’s Fall Festival to teach students and their families about their heritage and culture. CCHS student Trista Dorman was also heavily involved at her school by reading facts and sharing quotes about Native Americans during morning announcements throughout the month. Dorman was thrilled to share some wisdom but said it was also difficult to share things that are sacred to her and her people. “I feel that the history of what our people had to go through is a huge part of Native American Heritage Month and it’s hard to bring the harsh and brutal reality to light, but that’s what made it even more important for me to do,” said Dorman. She was able to share her culture within her own standards and bring forward what needs to be validated. “I feel like my school provides a safe place to express all aspects of my culture and I love that I got to share my heritage and bond with other Native American students.”  The district also brought in Fallon Paiute-Shoshone Tribal member Sam Malcolm to speak and perform for students at CCHS. Malcolm grew up on the Fallon Paiute-Shoshone Reservation and felt it was important for him to come in and be supportive and uplifting to the students and break any stereotypes. “I feel that the kids especially need to see that natives are living, flourishing people rather than a single people or culture misrepresented by their history books. So being able to speak to them as well as show them something different was to both educate students outside the local native community, as well as inspire the native students to pursue their passions,” said Malcolm.   At Lahontan Elementary School, teacher Stacey Manning wore her regalia almost every day last week. She also invited her mom and aunt in to tell Native American creation stories to all the kindergarten and first-grade students. “Our little ones enjoyed their stories and were so attentive and excited. I even brought in my cradleboard and taught them what we use them for. My aunt also sang some Paiute lullabies to our students and taught them some Paiute words. Fun was had by all,” said Manning.  A  few teachers conducted Native American lessons in their classrooms to further educate their students. At Numa, Kristina Lee’s class read the story “Fry Bread” by Kevin Maillard and learned about its history and cultural significance. Then they got to make fry bread by following a recipe, measuring the ingredients, and bringing it to the fryer. “They did great, and the fry bread turned out excellent,” said Lee. Teachers were not the only ones going the extra mile for students this month. The librarians at each school set up wonderful Native American displays for students to explore, which included Native American artifacts, literature, and learning activities. Native American Heritage month is just a small part of instructing the students, staff, and community about Native American heritage and culture. ChurchillCSD has a Title VI Indian Education program for Native American students and always works hard to honor the profound impact Native Americans continue to have in shaping our community. “November is recognized as Native American Heritage Month because it’s a time to celebrate our culture and our existence and share it with others but really this is something I strive to incorporate into my daily teachings with all of our Title VI students,” said Pacheco.

Around the Churchill County School District