Mosquitoes -- Then and Now 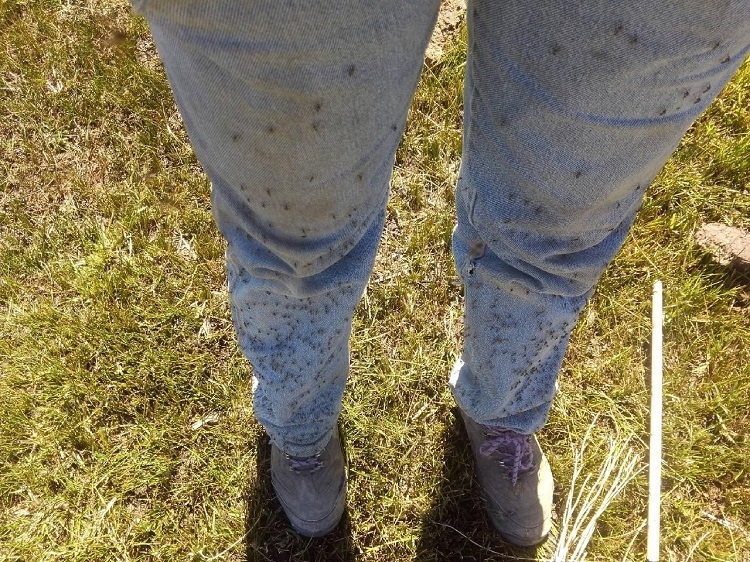 Sharon Harper A "leg count" is one of the ways technicians determine areas that need to be treated.

Mosquitoes may “bug” us but we all should be thankful for our mosquito abatement program because we have a lot less now than in the 1960s. However the dangers to both humans and animals that mosquitoes present are still present and it doesn’t matter if you live in town or the country. Learning more about them will help you protect yourselves and those you love.

My 1962 move to Pasture Road with two small children gave me an all-new perspective of those tiny flies that liked to dine on the blood of both humans and animals and their true threat. The children could not go out of the house to play because in a matter of a few minutes they would have lots of mosquito bites with evening time being the worst.

Margo Mills remembers how thick the mosquitoes were when she was about ten. She was a “one-person mosquito abatement.” At that time all girls wore skirts. Margot would go out in the evenings and slap the mosquitoes on her legs because she could kill a lot with each swat. Her mom would try to call her in, but she would answer, “I can’t I’m killing mosquitoes.”

My oldest daughter, about two years old, ended up in the hospital with a very high fever. Later Dr. Dingacci said he thought that these “unknown very high fevers were caused by encephalitis, nicknamed brain fever” which are transmitted by the bite of a mosquito, and there was no feasible way to check for sure if it was at that time.

That reminded me of what I witnessed as a teenager on the ranch near Sparks. A neighbor, Tip Melendy, had a beautiful dark dappled gray horse that was gentle, agile, alert, and great at working cattle and about anything else you wanted him to do. They said Blue had brain fever from the mosquitoes but thought he was getting better. I saw him about a month later. What a shock. That once beautiful horse, which was now thin with a lackluster coat, drooped and staggered as he walked and seemed unaware of his surroundings. He ultimately had to be put down.

I had to go check our cattle that were on a lease close to the government pasture. I followed the usual practice of doing this with a bit of repellent on my hands and face during the time of the least mosquitoes which was at about two in the afternoon. I was riding a young mare when a swarm of mosquitoes welled up. I could not breathe without holding a cupped hand over my mouth and nose. I knew I had to get us out of there, but it felt like she was trying to run and was bucking at the same time. I dared not get off because she would get away and run into a barbed wire fence and be hurt. I kept trying to rub the mosquitoes off her neck which left it bloody. I was appalled when I was finally able to get off when we reached home. Her belly and hind legs were dripping with blood. She had been constantly kicking her belly with both hind legs at the same time.

Boy did I and others jump for the opportunity to pass petitions to get a mosquito abatement program in Churchill County. We succeeded. In came the Gambusia fish which were planted in the drainage ditches along with both ground and aerial spraying. The Gambusia is a small fish that lives in the drains and ditches and eats the mosquito larva. They have made a difference. What a huge difference.

Then after a few years, the county stopped the program. It didn’t take long for the mosquitoes to take over again. There was an outcry from the public. What came out of it is a group with far more responsibilities and with the dedication to do the new complex job in the least intrusive way on the environment possible. Hence the extended name from “Churchill County Mosquito Abatement” to “Churchill County, Mosquito, Vector and Noxious Weed Abatement District.” The word “vector” sounds like something out of a military training exercise or an enemy engagement. But it also has biological meaning. A vector is a disease-transmitting organism such as a mosquito, bat, or tick that transmits disease-causing microorganisms from an infected person or animal to another person or animal. Our hard-working district employees are helping save us and our animals from more than simply mosquitoes.

While the district is busy abating, there are several things the rest of us need to be aware of to protect ourselves and our animals.

We all need to be aware that mosquitos carry several different, sometimes life-threatening, illnesses. Mosquitoes need water to hatch their larva and those larvae need to breathe air. Small, stagnate ponds like under a bridge or where there is a drip or even a low spot where water stands for several days are all mosquito breeding grounds. The larva can even hatch in water tanks. A few drops of salad oil poured on one of these stagnate ponds will keep the larva from being able to get air.

If you have horses, they need protection from biting insects. Horses are more susceptible to mosquitoes than cows because their skin is thinner.

An interesting fact about mosquitoes is that they are attracted to cows’ breath. Scientists use this allure to collect mosquitoes to identify the different species and for other types of research.

Ice Cream for All

A Few Thoughts from the Farm Bureau