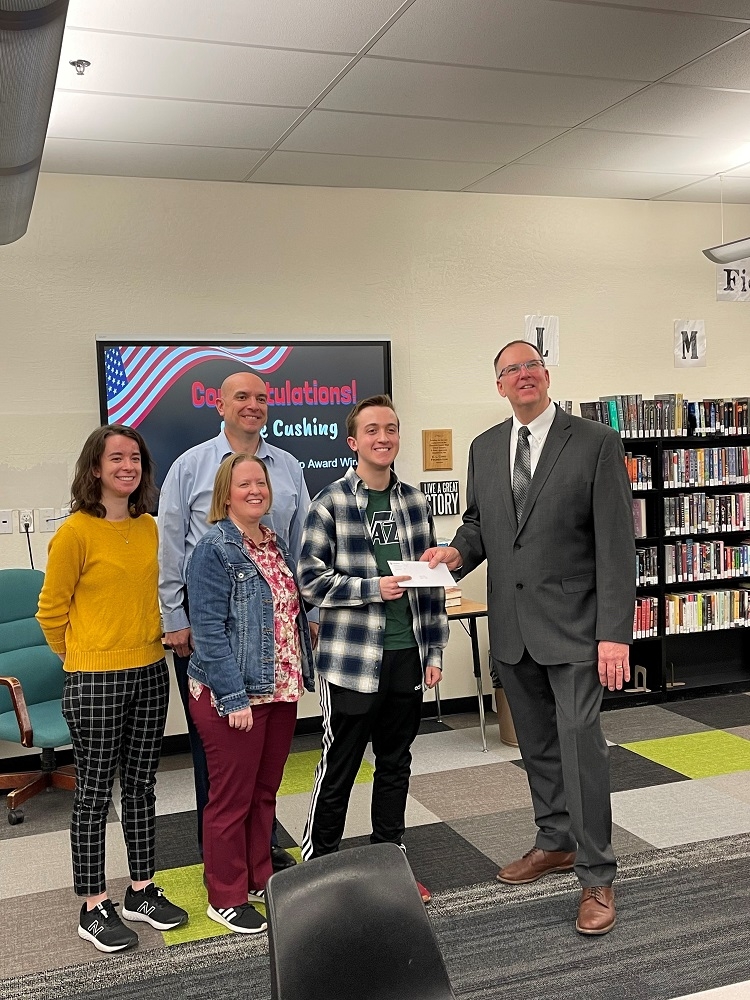 Kaitlin RitchieWade Cushing and his family with Director of Engineering for Gemini, Tom Toland

Churchill County High School Senior, Wade Cushing, was recognized by Gemini on Wednesday, April 6th. Director of Engineering for Gemini, Tom Toland, was in town visiting the Fallon plant and reached out to Principal Tim Spencer to see if he could come to the high school and personally recognize Cushing for being the winner of their $100,000 scholarship.

“Tom reached out to me because he wanted a meeting while he was visiting the Fallon plant, to discuss the possibility of Gemini providing some financial support for CCHS to sponsor a robotics team or a program like that.” It was during that phone conversation that Toland also stated that a student at CCHS had applied for a scholarship they sponsored and had been chosen for the $100,000 award. He wanted to tell Wade when he came in, but Spencer had something else in mind. “I thought we could do better than that, so I contacted his parents and leadership to see if we could put together a small surprise gathering in the library for Wade to surprise him. I was floored by what a huge accomplishment this was for this young man, and I did not want that to go unrecognized,” Spencer said.

On Wednesday, April 6th Wade was called to come to the Library not knowing what was waiting for him. Wade’s Mother Verity Cushing was thrilled to be there to surprise her son. “It’s funny because he was just telling the Bishop of our church last night that he was feeling frustrated and said he had not heard from anybody and did not know what was happening with any of the scholarships he applied for.” Wade had no idea he was chosen and was certainly surprised to walk into the library and see Tom, friends, family and leadership there to congratulate him on this incredible award.

Toland said they give away 1-2 scholarships to promising engineering students a year. It started, because the founder of Gemini is an engineer. He really wanted to do something to give back to the community and focus on things that are going to help with the future of manufacturing in the US. As a result, he founded this scholarship and named it after Ross Wagner, a former board member of Gemini who passed away in 1992.

“We give away scholarships to engineering students, but we also have scholarships available for our employees' children to apply for,” said Toland. Gemini likes to partner with schools and with the high schools in the areas where there is a Gemini plant. “We have not really done a lot here in Fallon, which is why I reached out to Tim and we will begin that conversation after this gathering.”

Cushing was up against many other applicants throughout the country. The application process was extensive and included an interview portion about which Toland said, “I would not have been able to do at Wade's age.” Out of all the students who applied, Toland said the way Wade presented himself in the interview really stood out to him. “He did a great job, he was very mature. Without question he's got the grades, the ACT scores, and he chose to go to a great school!” However, what struck home with Toland the most was how he connected to Wade on a personal level, “I moved my family when my girls were in school and my oldest daughter was about the age Wade was when his parents moved him to Fallon from California. I know how hard it was for him because I know it was hard on my daughter, but he didn’t lose focus. He kept at it and kept his grades up and kept focus on what he wanted to do.”

Right now Wade plans to go to Texas A&M. It is the school both his parents graduated from, and he said that it was a pretty easy choice due to its welcoming and interesting school culture.

Wade's father, Jason Cushing, said, “For Wade this is a life changing opportunity. That is the bottom line. I cannot thank you [Tom] enough for your consideration of him. As a young man, I was in Wade’s position and looking at different schools elsewhere. Then I had an opportunity that allowed me to go to Texas A&M on a big scholarship and I am so excited for him to have this same opportunity!”

Wade reflected on how it was about three months ago that he was sitting right here in the library at a scholarship meeting when he found out about this scholarship. It had all come full circle and he could not have been more grateful for receiving such an incredible award.

CCHS Principal Tim Spencer is thrilled for Wade and cannot get over what a huge accomplishment this is for him. “This is just really something. I have goosebumps that have quite literally not gone away since Tom called me with the news last week. This is very exciting for him and his family. His future is bright.”