FRTC Does not Make the Cut in the NDAA 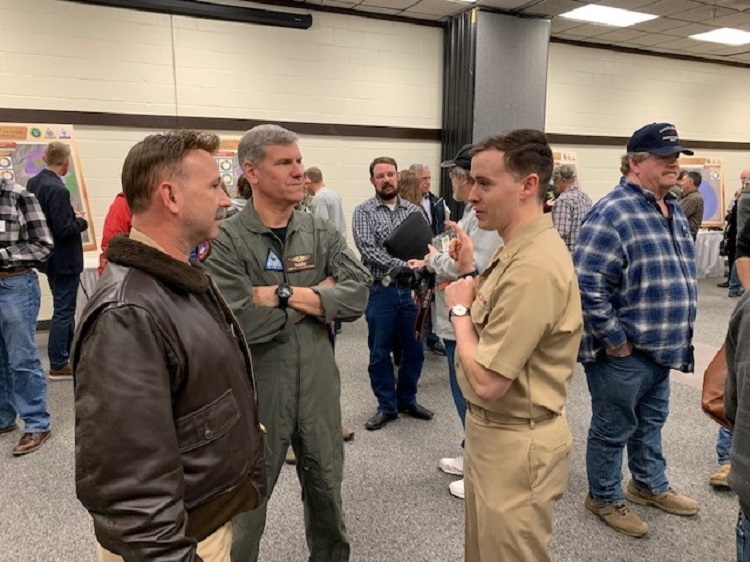 File photo Captain Morrison at a public meeting in January 2020

The U.S. Senate passed the 2022 National Defense Authorization Act that authorizes $768 billion for military and national security programs but did not include the Fallon Range Training Complex Modernization.

The Senate passed the NDAA for Fiscal Year 2022 by an 89-10 vote, it now goes to President Biden for his signature.

The defense bill contains a 2.7% pay raise for service members and 12 weeks of parental leave for all service members, including foster and adoptive parents. There are reforms to the military justice system to empower and protect survivors of sexual harassment and assault, improvements to childcare facilities on U.S. military bases, provisions to bolster cybersecurity efforts, invest in mental health resources for our troops, combat climate change, and provide critical support for Israel, including funding for their Iron Dome defense system.

“This year’s defense bill provides vital support for our service members and their families, from a much-needed pay raise to mental health and childcare resources that will improve the quality of life for military members across the country,” Cortez Masto said. “Nevada has a long history of supporting our national security, and I worked to include provisions to fund projects on Nevada’s military installations that will help improve our military readiness and keep our nation safe. Supporting the Nevadans who protect our country is a priority of mine, and I will always work across the aisle to get them and their families the resources they deserve.”

The bill also includes Cortez Masto’s legislation to leverage the National Guard and other military resources to help combat wildfires in Nevada and across the West.

The bill includes no funding to restart the failed Yucca Mountain project.

“This bipartisan package accomplishes so much to support our state’s service members and defense installations while addressing pressing threats to our national security,” Rosen said.

Congressman Mark Amodei said the bill provides $25 billion more than what President Biden and Democrats initially proposed, including providing the funding necessary to counter Chinese and Russian military hostilities and a requirement that the Secretary of Defense recovers all aircraft provided by the U.S. to Afghan Security Forces that were relocated to other countries.

However, it does not include the FRTC modernization that was part of the Northern Nevada Economic Development, Conservation, and Military Modernization Act that Amodei reintroduced in September.

The FRTC has not been expanded since 1986 and the Navy has said that without expansion, the range cannot accommodate the necessary stand-off distances for precision guidance munitions launched from F-35 and F/A-18 aircraft and other training that over water ranges cannot replicate.

“While we are disappointed that the FRTC modernization language is not included in the 2022 NDAA, the requirements the Navy has defined have not changed,” said Capt. Evan Morrison, Commanding Officer, Naval Air Station Fallon. “The enhancements needed to optimize the training our aircrews and SEALs go through on the Fallon ranges remain critical to the readiness of our forces and our national defense. We will continue to work with all of the stakeholders here in Northern Nevada moving forward. We will look to the 2023 NDAA legislative cycle to bring the needed enhancements to our ranges and airspace.”

Amodei said, “In this bill, Fallon maintains the status quo as authorized last year as we continue to work out an ultimate solution for the Modernization.”