American Patchwork Quartet is a Quilt of Grammy Talent 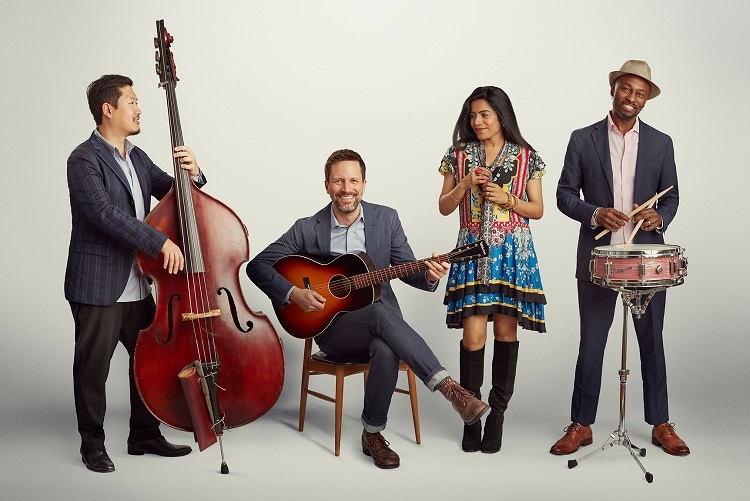 The American Patchwork Quartet, a group of Grammy award musicians, will be performing in the Barkley Theatre at the Oats Park Arts Center on Saturday, November 13 at 8:00 p.m. The quartet is famous for remaking cultural American folk songs from decades ago into compositions that highlight each band member's musical expertise quilted with their life experiences.

Valerie Serpa, Executive Director of the Arts Center, describes the band's genre as “historical American songs, folk music from that time, working-class people music from the 1930s and 1940s.”

“The idea is that almost all of us are all immigrants from somewhere else. My grandfather was from Portugal. This genre is interesting because American folk music has been created by people that have come here from all over the world and that are now proud Americans. This quartet has built their body of work from all these diverse cultures that are the basis for our American folk traditions.”

Conversations with the artists about using the magic of music to explore one's life events will be held in the Arts Bar at 3:00 p.m. The box office, galleries, and Art Bar will all open at 7:00 p.m. Each band member is an acclaimed solo performer, as well as being members or collaborators with other bands. “The band's musicians all have their own genres – blues, jazz, folk, rock, bluegrass, classical – but came together to weave their talents into the American Patchwork Quartet.”

“Blues is an American tradition but it was a combination of music that came from slave days and was transformed in America to what it is today. Jazz is very similar in having early roots too. American folk music talks about being in America, moving through this huge country, and finding opportunities needed to survive. It can be emotional when you think about the struggles people of that time had to deal with, yet they managed to prevail. And you will hear much of this in the band's music.”

Guitar player Clay Ross founded Ranky Tanky, a Billboard chart-topping band, and has also performed with Gregory Porter and Bobby McFerrin, and many others. He weaves jazz, folk, and blues into his style of playing.

Vocalist Falu Shah, originally from India and formally trained in Jaipur classical music traditions, has performed with Yo-Yo Ma, Ricky Martin, and Blues Traveler, to name a few. She has also performed at the White House for President Obama. “Her voice is just so beautiful, and it's amazing the way she has put her stamp on folk music,” Serpa said.

Drummer Clarence Penn is one of the busiest jazz drummers in the world, a leader of multiple bands, a composer, producer, and educator. He has performed with Ellis and Wynton Marsalis, Stanley Clarke, Steps Ahead, Michael Brecker, and Fourplay in addition to many other chart-topping musicians.

Upright bass player Yasushi Nakamurais is a jazz performer who graduated from Berklee School of Music and Julliard. He has released two albums, his second of which received Jazzlife magazine's Album of the Year award in 2017.

“I had seen this band perform in New York at the Association of Performing Arts Presenters event, and we had to reschedule them from April of last year due to the pandemic. This is only the second live performance held in the theater since March 2020, so we are very excited to be starting the concerts up again. This will also be the last weekend to see the Visual Art shows in the galleries too, as they will all be changed out before we do our next event.”  There are five more concerts scheduled from January through June for the 2021 – 2022 season, and the Arts Council is already working on the 2022 – 2023 season's schedule of events.

The next band on tap to perform in the Barkley Theatre is the Comstock Cowboys, presented by Mayor Ken Tedford, the City of Fallon, and the City Council on Sunday, December 12 at 6:00 p.m., with the Arts Bar and galleries all opening at 5:00 p.m. “The Comstock Cowboys have performed here every year for at least ten years if not longer. Their performance was canceled last year because of Covid. Having them back in Fallon is like the city's gift to the community for the holidays.”

Serpa went on to say, “We try to provide diversity in the performances that we offer each season, and really try to not do the same thing every time. There are so many genres available, so we try to present a broad spectrum of talent. Add in the fusion of different styles of music, and the choices grow exponentially.”

For more information about events at the Arts Council, visit their website https://churchillarts.org/

Join the Churchill Arts Council and the Churchill County Library this Saturday, October 23
SUBSCRIBERS
Click here to log in
B1 advertising banner