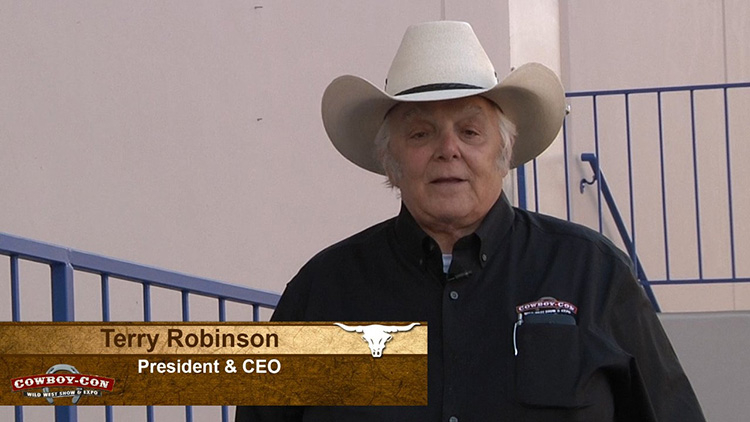 Is there a cowboy or cowgirl in your heart? If you grew up with, or are even familiar with John Wayne, then you may have some cowboy or girl there somewhere, and the Cowboy-con could be the place to let that inner feeling run free. Cowboy-con is being held from Friday, October 9 through Sunday, October 11, 9 a.m. through 5 p.m. each day, plus two nighttime events – all at the Churchill County Fairgrounds at 325 Sheckler Road – billed as a Cowboy Convention weekend of events dedicated to “all things cowboy and fun for all ages”, and its first year in Fallon.

Terry Robinson, CEO of Cowboy-con.com, said the proposal came to him in 2016 for the first Cowboy-con event he held in 2017 in Washoe County. After that experience, he felt that Churchill would be a better fit for a series of events that would appeal to all age groups. That he lives here in Fallon may have played a small part in that choice, too.

“I started thinking about the idea of a Cowboy-con as compared to Comic-con and Renaissance Fairs,” he said, “and thought why not create something 'cowboy' in the same idea as Comic-con, with a renaissance fair, and a rodeo, and a wild west show, and a county fair, and put them all into one?”  Robinson said this year's convention will feature a Frontier Village similar to the tent city shown in the Hell on Wheels television series with a saloon, a dry goods store, and a medical tent complete with period-correct amputation equipment. Attendees will also be able to see themselves as if they were in the John Wayne movie, McLintock, by having their image projected into certain movie scenes.

According to the Cowboy-con website, Friday's line-up includes vendor booths purveying everything cowboy from 9 a.m. to 5 p.m., followed by a kick-off party with live music by Locked N Loaded from 8-1 p.m. Entrance to the party is included with the purchase of a Friday general admission wristband.

The Saturday round-up is billed to include two Wild West shows, shopping and visiting vendors with everything cowboy, Frontier Village activities, FFA and 4H exhibits, Texas Longhorn, Rescue Horse, and Rescue Dog and Small Animal exhibits. Adoption services may also be offered by rescue organizations. A Chuckwagon BBQ dinner, catered by the Wild Horse Cafe of Fallon, is planned from 5:30-8 p.m. with reservations being required in advance via their website (see below). Live music provided by the Junkyard Hillbillies is planned to follow from 8-11 p.m.

The Sunday wrap-up and closing activities include a Wild West Show, shopping and visiting vendors with everything cowboy, and Robinson's presentation of part of the gate proceeds being donated to the John Wayne Cancer Foundation.

When discussing plans for next year, Robinson said, “The fairgrounds area, including the new Civic Center, has been reserved for September 6 through 11, 2022 already. And, I have plans to include a film festival next year too, similar to Robert Redford's Sundance Film Festival.”  He feels that this year will be the kick-off year for the growth in Cowboy-con event offerings he is planning for next year. This year's local advertising includes KOH and KBUL radio station ads, and television commercials are planned to run on the three major networks next week. Robinson said the event will be recorded live then replayed on Facebook and on their YouTube channel. “It's taken on its own life.”

“I want Cowboy-con to be a fun experience for everybody of all ages, and to be the Reno Rodeo of Fall-on,” Robinson said. “In this day and age, we could all use to be happier. Let's escape to a time that may have been a bit simpler, and experience the cowboy way for a little while at Cowboy-con.”

More information about all planned convention activities, plus admission wristband purchases, show and dinner reservations can all be found on the Cowboy-con website, http://www.cowboy-con.com/.