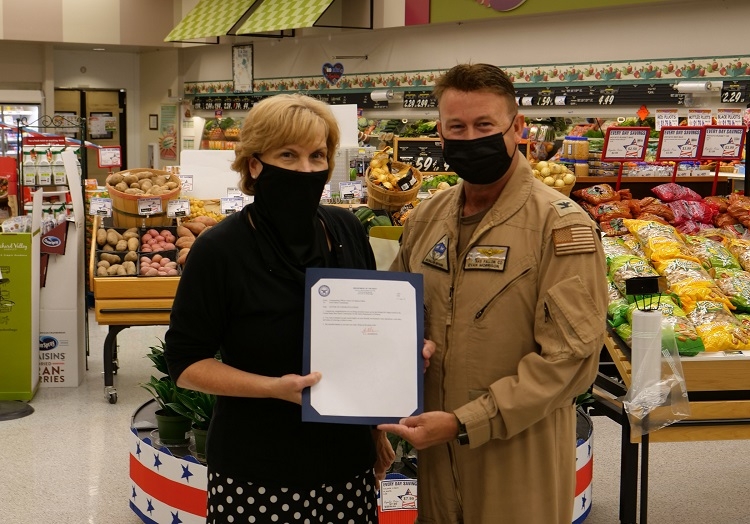 The Commissary at Naval Air Station Fallon earned national recognition from the Defense Commissary Agency (DeCA) for its performance in 2019.  The store was selected as the runner-up for the Richard M. Paget award for “Best Small Commissary in the United States.” DeCA announced the winners of the 2019 Best Commissary Awards in a virtual ceremony July 29.

“We were hoping to be able to physically do an award presentation with real people in a room, but with the pandemic that’s turned out to be a lot tougher than we ever thought it would be,” DeCA Director and CEO Bill Moore said. “So, in the spirit of moving forward, we decided it was far beyond time to award the 2019 Best Commissary awards.”

The awards are given in five categories, determined by store location and size, and are named in honor of government officials who protected the commissary benefit and championed quality-of-life issues for the military and their families.

DeCA zone managers nominated one store per awards category from their zone. Nominations were judged on intangible qualities, such as friendly environment, a well-run store, good work ethic and sense of a cohesive team, as well as tangible qualities, including:

According the current NAS Fallon Commissary Director, Mickela Perryman, the store excelled by focusing on their customers.  Bill Hicks, the previous director, expanded weekend hours and focused sales events on the visiting air wing personnel that were in Fallon for training.  But it wasn’t just Mr. Hicks making it happen.  “Business isn’t done by one person.  It takes a team of employees,” Perryman said of her dedicated commissary staff.

On 19 August, Captain Evan Morrison, NAS Fallon Commanding Officer delivered a letter of congratulations to the staff commending them for all their hard work.

NAS Fallon was only bested in the “Small US Commissary” category by Laughlin Air Force Base in Texas.

About DeCA: The Defense Commissary Agency operates a worldwide chain of commissaries providing groceries to military personnel, retirees and their families in a safe and secure shopping environment. Commissaries provide a military benefit, saving authorized patrons thousands of dollars annually on their purchases compared to similar products at commercial retailers. The discounted prices include a 5-percent surcharge, which covers the costs of building new commissaries and modernizing existing ones. A core military family support element and a valued part of military pay and benefits, commissaries contribute to family readiness, enhance the quality of life for America’s military and their families, and help recruit and retain the best and brightest men and women to serve their country.