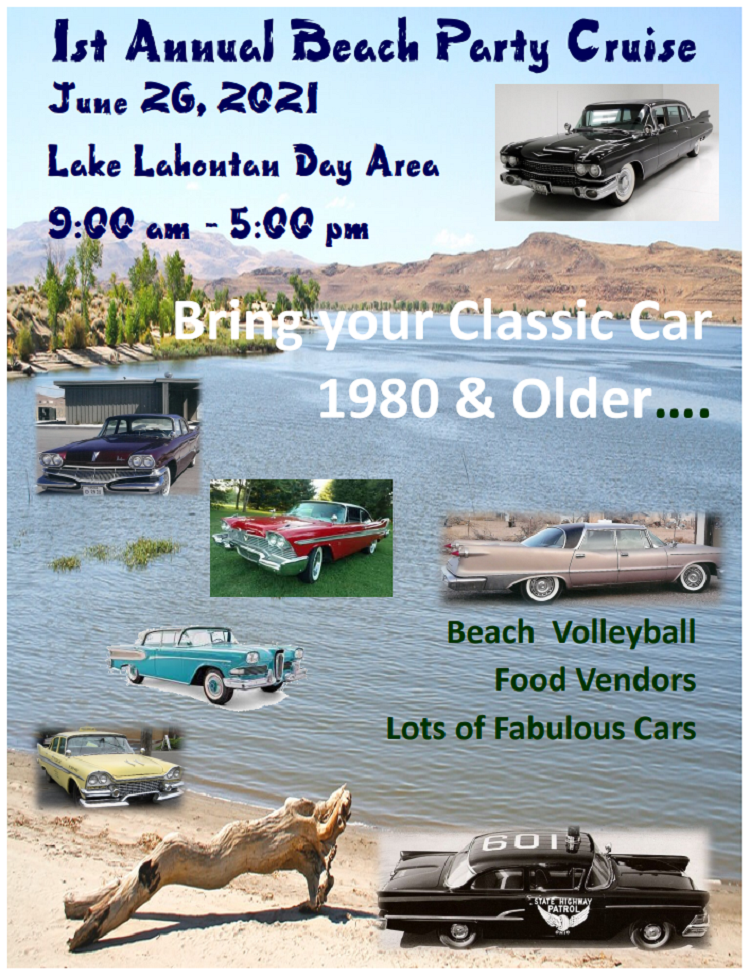 Michael Pettenger just likes old cars, so much so that he is organizing an all-day Beach Party Cruise on Saturday, June 26 at Lake Lahontan's Day Use Picnic Area on the Silver Springs side of the lake, starting at 9:00 a.m. There won't be an admission fee for the event, however, there will be a five-dollar State Park entrance fee per car.

Because Lake Lahontan is part of the Nevada Parks System, Pettenger couldn't call this year's event a “car show” - but it could be called a “beach party”. He is unsure of the number of cars expected for the Beach Party Cruise, but said cars are cruising in from Lovelock, Yerington, Fallon, and Fernley, including a 1936 Rolls Royce, a few old Cadillacs, a splash of 1957 Chevys, sprinkles of Thunderbirds, an Edsel, and even some old Station Wagons.

If traveling from Fallon, follow Reno Highway west to Leeteville Junction, turning left to continue on Highway 50 toward Carson. Circle the Silver Springs roundabout to travel south toward Yerington on Highway 95A, Turn left on Fir Avenue where the event will be accessed using the second entrance to the Day Picnic Area. That entrance road starts out paved, turns to gravel for a while, then turns back into pavement. Public restrooms are available there, food vendors will be on-site selling goodies, and DJ Davey Munoz will be spinning platters to rock the crowd.

Pettenger said, “I'm not doing this to make money, and won't ask anyone for it. I just like to bring people together, to make friends, to have a good time, and enjoy some cars.” Pettenger got started hosting car shows last year. He said, “I have a habit of listening to people, and heard these people saying 'There's nothing to do.' So I said to them, Let's do a car show.” He said he knows a number of car people and went about organizing last year's car show. He has no cell phone, and no computer – only one old rotary and one old touch-tone phone. Yet, he was able to bring 200 cars together for that show, held at the Reno-Fernley Raceway on Highway 95A in Fernley called “Remembering the Classics of the Past”.

Pettenger has always been around cars, especially the classics, but is saddened by the fact that so many of them are disappearing so he's making an effort to save a few himself. He has a 1959 Imperial, a car he never thought he'd own. She was a barn find and is all original. He named the car Rose and is planning to bring her to the party. His 1958 Dodge Taxi will be trailered out to the party as it's still a work in progress. This car is named Arthur, after Arthur Fonzarelli (The Fonz), but he calls it Artie for short. He also has a 1960 Dodge Pioneer named Rhonda and she's party-ready too. Additionally, Pettenger has a 1970 Lincoln Continental that he found in a field, bought it for $300, and is still acquiring parts for it. The last car in his collection is a 1977 T-Bird that needs a little work, and he calls that one Toby, named after his riding buddy.

Pettenger is looking forward to the Beach Party Cruise and hopes that everyone else is too. “No pre-registration is needed,” he said, “just come on out and have a fun car day.” The event is planned to run until 5:00 p.m.

An Update on the Transfer Station

Formation of a New Christian Motorcyclists Chapter in Fallon