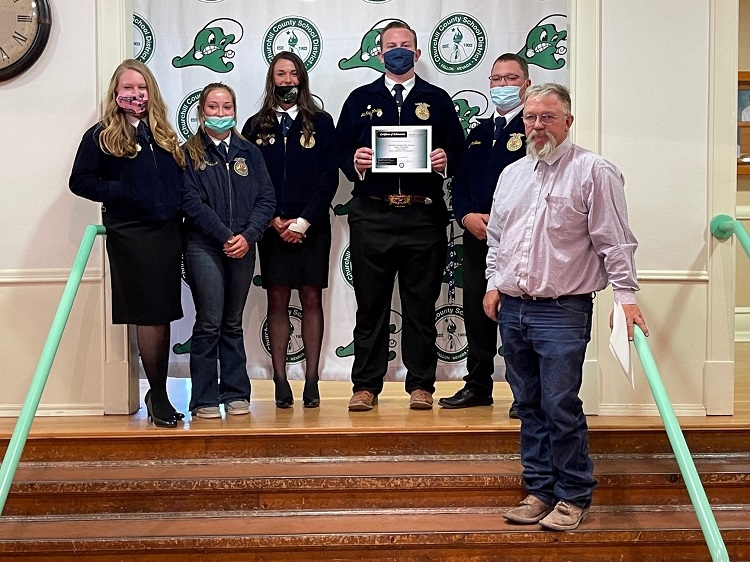 The Churchill County School Board of Trustees approved a renewal of the contract with Oasis Online to provide technology support to the district in the amount of $483,072. The contract will run from July 1, 2021, to June 30, 2022.

Dan Slentz, the owner of Oasis Online, spoke to the board and provided a written report of the activities and services provided to the district over the past year. “What a year for technology,” he said, “we are proud of our team and the response we were able to provide.”

In the past year, Oasis closed 4,701 help tickets and received 100% Excellent to Outstanding survey ratings. Also noted in the survey information, Oasis scored consistently at 100% for response time and technical knowledge, with 94% of tickets being resolved on the first visit. Trustees Tricia Strasdin and Carmen Schank both complimented Oasis on their service and responsiveness.

The board also recognized the Churchill County High School Future Farmers of America chapter for their excellence at the national FFA convention, bringing home the prestigious “Chapter of the Year” award, and the Health Occupation Students of America for their success at the state HOSA conference. (Photos above) Elaine Adams, HOSA teacher congratulated Vera Vaz who was named as a state officer this year, as well as the first-year EMT team that won two of the top four awards.

Comptroller Christi Fielding reported that she continues following the activities and hearings at the State Legislature, and there are still no answers on a final budget number, although some state department staff is saying there will be finalized numbers this Saturday. There is also talk that the Hold Harmless funding will be based on per-pupil numbers rather than a lump sum as previously discussed. Additionally, she said the leadership team has met to discuss potential budget cuts and options for refunding the contingency plan.

Gaylene Drinkut spoke during public comment on the budget update regarding the Recommended Personnel Action document attached to the agenda containing a list of positions that the board is “not filling at this time.” She said that there are two custodian positions on that list and she is concerned, in light of how much work fell to the custodial staff last year during COVID. “As soon as we know budget numbers, please let us know. With all the extra cleaning that is required and with the adding of more classrooms this year with reduced class sizes we can’t do without these custodians.” She said last year the custodial staff was widely recognized throughout the district as “heroes” and to not fill those positions would be detrimental.

In other businesses, the principals provided written reports to the board regarding activities at their respective schools. The board approved a renewal of the proposal for medical, vision, dental, and life coverage, and they approved the five-year capital improvement plan.

Several community members provided public comments regarding the wearing of masks, student mental health, and vaccines. Jessilyn Wallace also spoke about the number of family tickets to graduation being limited to eight and two parking spaces, saying many families have more people than those who would like to attend.

The school board meets the second and fourth Wednesday of each month at 5:30 p.m. in the Pit at 690 S. Maine Street. Agendas and board packets can be found online at ChurchillCSD.com.

Proficiency Scores Released by the State