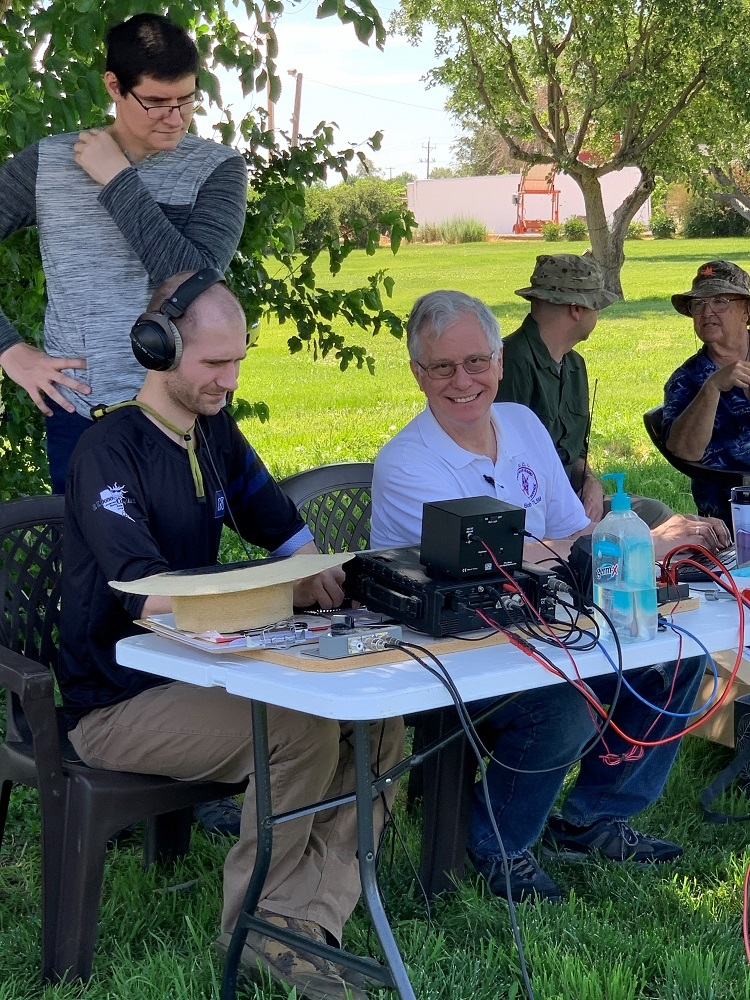 Local Ham Radio operators at field day this year
Have you ever thought it would cool to connect with someone in another country? What if you could spin a nob on radio and stumble upon a voice broadcasting from Italy or Anchorage and get to say hello?

Have you ever thought it would cool to connect with someone in another country? What if you could spin a nob on radio and stumble upon a voice broadcasting from Italy or Anchorage and get to say hello? Well, you can. Young people have scarcely heard of this and many not-so-young folks have forgotten about it -- Ham radios!

Ham radios, also called amateur radios, use frequencies to communicate for non-commercial purposes. “Ham” was the first amateur wireless station that broadcast in 1908. Individuals licensed to traverse the radio airwaves are referred to as amateur radio operators, although many are far from amateur.

Operators are required to be licensed with the Federal Communication Commission (FCC) and are limited to small frequency radio bands. However, these bands enable worldwide communication and can even broadcast into space. They also allow for radio communication through the internet.

Radio communication may sound complicated, but in truth, it’s a fun hobby that has been around for over a century. Long-time Fallon amateur radio operator, Rick McCusker (WF60), first took his licensing exam in 1971 in New York City. “Back then, you had to be able to diagram circuits and know how everything works,” stated McCusker. “Now, the basic technician exam is a simple 35 question test.” As soon as an individual passes the exam, they are issued a call sign by the FCC. A call sign, usually a combination of letters and numbers, is used to identify an operator or station on the airwaves. Only licensed users may transmit over radio frequencies except in cases of emergencies.

The amateur radio hobby has kept up the times and rapidly changing technology. Expensive equipment isn't required. In fact, a $15 handheld radio will do. There are even apps than can access radio frequencies. Of course, more power and sophisticated equipment will result in greater range.

Local amateur radio enthusiasts, Amateur Radio of Churchill County (ARCC), held its annual Field Day on Saturday, June 27th. The event brought operators together to contact as many other stations as possible in a single day. Last year over 400 separate stations were contacted around the county and world.

Hobbyists Brenda Jeppsen (AF7SW) and her husband initially started using amateur radios when their local church leadership asked them to keep an eye on emergency communications. Now they have their high-range equipment and are members of ARCC, which is now about 40 strong. According to Jeppeson, not only is Field Day a fun day for current members to come together and connect with amateur radio enthusiasts around the globe, it is an opportunity to share what they do with the community. “We are trying to get young people to engage in his hobby,” Jeppesen stated. “If we don’t, the hobby will die.”

While the use of radio frequencies for communication isn’t as commonly used as cell phones, landlines, and VOIP, it has proven time and again to be one of the most reliable means of communication. According to McCusker, who was also a radio operator in the Coast Guard and still volunteers with Search and Rescue, when Hurricane Katrina struck, all communications were destroyed. An amateur radio operator was able to convey to the outside world how catastrophic the damage was. Similarly, the San Francisco Police Department had to rely on old HAM radios when the microwave transmitters were knocked out of alignment after the earthquake in 1989.

McCusker, as well as many other ARCC members, carry ham radios with them at all times. Radio waves are everywhere, and as most locals know, cell coverage is not. Additionally, they require very little power to transmit. If you are curious about ham radios or would like to have a backup emergency communication option, ARCC can help get you started. https://www.facebook.com/ChurchillCountyAmateurRadio/

Never miss a meeting or community event – keep an eye on the community calendar at https://www.thefallonpost.org/events/

If you like what we’re doing, please support our effort to provide local, independent news and contribute to The Fallon Post, your online news source for all things Fallon.

Local Ham Radio -- Fun and Useful in Case of Emergency

marc_mr
A great person and neighbor. He will be missed.

Ron Anglin
I’m sad to hear of a great person as Alvin. We had many talks over the year both spiritually and...

Richard
How about setting up a camera were the majority of the carts being left and prosecuting the people that are...
Hot topics
5
Obituary -- Thomas Ira Clark
2022-06-18, 05:25 PM
3
Fallon Tribe Announces the Passing of Former Chairman Alvin Moyle
2022-06-22, 08:21 PM
Contact us
Fallon Magazine - read online!