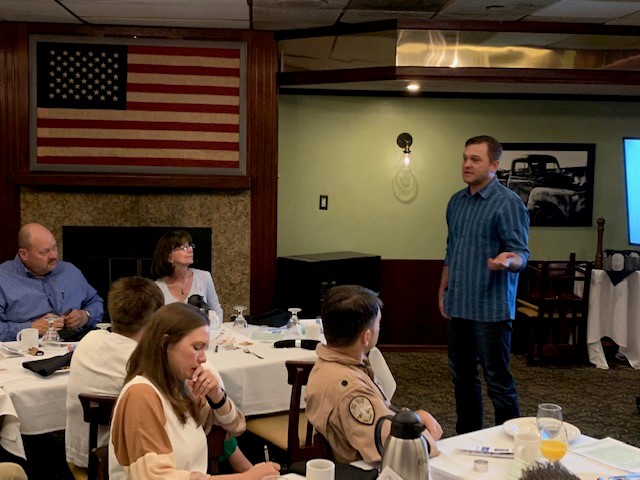 by Rachel Dahl -- There is good news and some positive movement when it comes to housing in northern Nevada as opposed to this time last year when the Churchill Economic Development held their housing discussion. Last week at the CEDA business council breakfast, Bill Brewer of the Nevada Rural Housing Authority joined Aaron West of the Nevada Builders Alliance to provide another community report on housing and pulled in expanded details on the related issue of workforce. West said the Tesla affect is real, providing jobs and driving housing needs. “Going back to 2014 they projected that over five years they would create 52,000 jobs and everybody laughed at them,” he said. “What happened is they actually hit the 52,000 mark only four years in.” He said that a revised study shows projections for another 50,000 jobs over the next five years. According to West, as long as “our neighbor to the west” California continues to “do what they do” with regulations they continue to drive people to Nevada. Besides job growth, the Reno area saw an increase in 5,000 retirees who moved into the area. Additionally, “we are now starting to see folks who are chasing affordability.” The average sale price for a home in Reno is over $420,000 and while West said there is one development that is under $300,000, most housing prices start over $400,000. He said those prices make apartment products paramount which accounts for over 3,000 apartments added in Reno last year. And he says that demand spills over to Fernley and Fallon. “As we move out into the rural areas, we need more rental product.” Brewer mentioned Senate Bill 103 which was passed during the recent legislative session and allows a community to waive certain fees to encourage development of housing. West added, “when you’re looking at $20,000 in up-front permitting costs, a community can now support housing by reducing or eliminating some of the costs associated with getting some of these projects off the ground.” West said that one of the challenges for the housing industry is finding a workforce to actually build houses. “The biggest issue right now is labor and whether or not you have it and how much it’s going to cost to get it,” he said. “My number one pitch is if you know any young people who don’t know what to do, bring them to me.” Holding a seat on the Governor’s Workforce Development Board gives West a unique perspective. “We actually talk a lot about what’s going on in education and how that translates to the jobs that are being created.” He talked about the push over the years for students to attend college and the trillions of dollars of student loan debt that has resulted, along with the number of degrees that don’t translate to high paying jobs. “We started getting the data to support this and last year between UNLV and UNR we graduated 700 kids with a degree in psychology, there were 30 jobs available. We needed 500 civil engineers last year and out of our education system we got 250, we needed 1,200 teachers and we got 600.” According to West, the average wage for a skilled trade in Nevada, electrician, plumber, HVAC, framer, is $110,000. “These are the kinds of discussions we are hoping to drive in our K-12 education system.” “The Office of Workforce Innovation OWINN,” said West, “is leading the charge and working with GOED (Governor’s Office of Economic Development) saying ‘K-12 and NSHE, here are the jobs being created, what are we doing to make sure we have a workforce’.” He said it’s not just the housing industry that suffers either; “healthcare is struggling to meet their demands, local government, even the fast food folks.” The existing 52,000 jobs are a result of the original 6,500 jobs that were projected when Tesla moved to northern Nevada, and we just see that cycle continuing. The demand for high tech jobs in the area drives the need for houses, which drives the demand for high skilled trade jobs. And now our graduates have a plethora of choices and we have a better chance of keeping them here.     Never miss a meeting or community event – keep an eye on the community calendar at https://www.thefallonpost.org/events/ If you like what we’re doing, please support our effort to provide local, independent news and contribute to The Fallon Post, your online news source for all things Fallon.