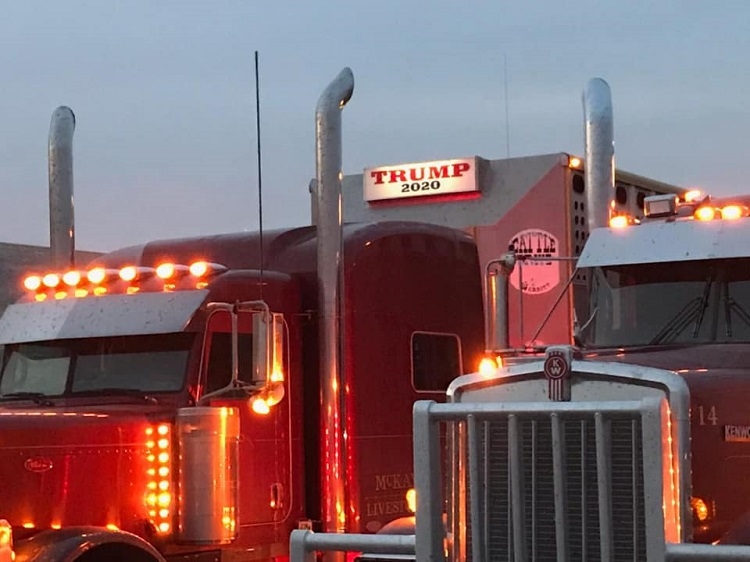 Bardell McKay Jesse Hickey is helping haul cattle for the Ranchers for Trump Cattle Drive being held this week and culminating in an auction in Fallon on October 14th. Donald Trump, Jr. will attend.
Statewide cattle drive planned to benefit Trump campaign

Northern Nevada cattle ranchers have organized a statewide Cattle Drive for President Donald Trump, in an effort to raise funds for the president’s re-election campaign. Jack Payne, owner of the local sale yard here in Fallon, Nevada Livestock Marketing (NLM) is organizing the effort that will gather cattle from Wells down I-80 and from Ely across Highway 50, picking up donated cattle all along the way and delivering them to the sale yard in Fallon.

The Cattle Drive will begin in Wells and Ely next week on October 13th, ending up in Fallon on the 14th where a lunch will be held at the auction yard from noon to 2 o’clock p.m., located behind Louie’s Home Center. At 2 o’clock Donald Trump, Jr. will be speaking, along with Congressman Devin Nunes (R) from California, and Adam Laxalt. The auction of the cattle will begin at 5 o’clock p.m.

Similar to the cattle drive organized to support Adam Laxalt in 2018, NLM will be accepting delivery of the animals and running its own truck up Highway 50 on Oct. 13. The cattle will be sold on the 14th at a special sale that should “attract every buyer in the region,” according to Payne. “The sale yard will be tracking the 3% commission on every sale and will make a donation in that amount to the campaign,” added Payne.

Area businesses and others interested in supporting the cause can contact Payne at 775-225-8889 to make arrangements to buy one of the Cattle Drive animals and donate it back to the sale. In that way, Payne explained, a single animal could be bought and sold many times with all proceeds going to President Trump’s campaign.

The Ranchers for Trump Auction will also be offering some non-livestock items at the event on October 14th. One of the items donated is a round of golf for four at Coyote Springs Golf Club donated by Geyser Ranch, which also includes a lunch for four at Mitch’s Bar and Grill.

“This election is critical to the preservation of rural values and the very essence of life in a free and fair America. Election Day is rapidly approaching, and the president needs all the help he can get. If we pull together and fight to win we will help secure four more years of an administration that will ‘Keep America Great,’” said Payne.

Rex Steninger of Lamoille is helping organize the fundraiser and said ranchers have been recruited from all across northern Nevada to contact their neighbors, collect the donations and haul the cattle to auction. Collection stops are planned in Wells, Elko, Carlin, Battle Mountain, Winnemucca and Lovelock along I-80; and Ely, Eureka and Austin along Highway 50.

Check out the video our Viviane produced if you need help with your mail in ballot...