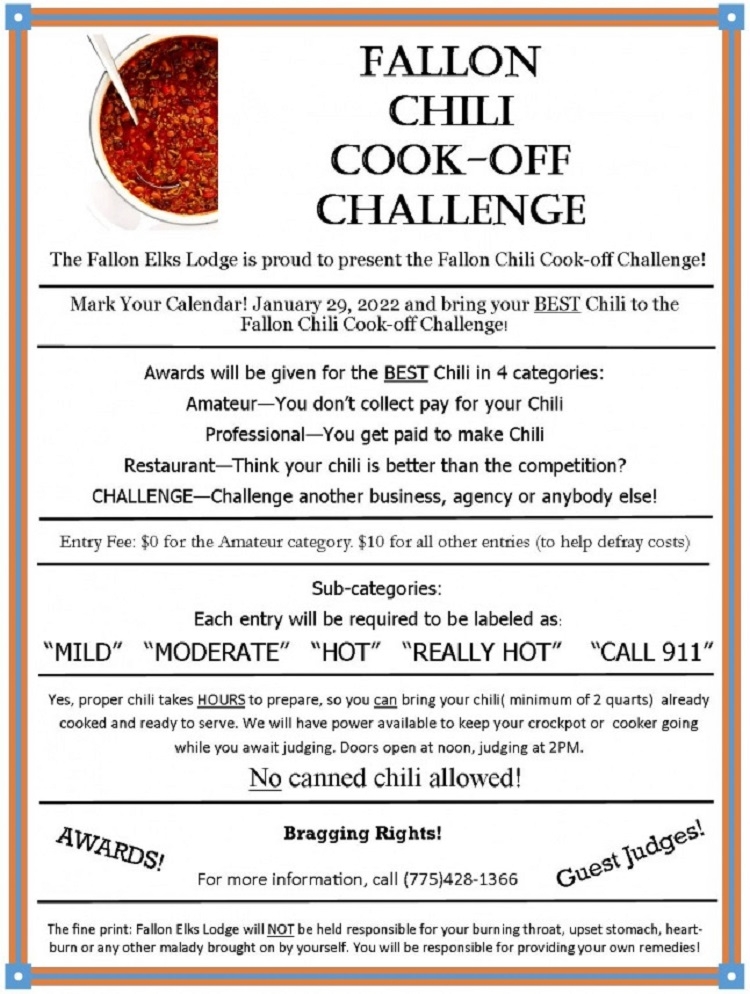 “We did that before,” they said. “Why not do it again?” he said, and now the Fallon Chili Cook-off Challenge is planned for Saturday, January 29 from 12:00 noon until 3:00 p.m. at the Elks Lodge at 95 West Center Street.

Once Rick McCusker made that suggestion, the Elks members said “Good, then you can run it.” But McCusker didn't mind being made chairman, it was his idea after all. He said, “I am providing the spark.” He plans to issue challenges to various groups, inviting them to cook off against each other as part of the fun. The Fallon Police Department versus the Churchill County Sheriff's Office, the Banner EMS versus the Fallon/Churchill Fire Department, and even restaurants versus other restaurants. Individual amateur cookers are also invited to compete in the cook-off.

To participate in the cook-off, each person or team should bring at least two quarts (or more) of their special chili, ready to serve in a crockpot or warmer where electric outlets will be available if needed. Each competing chili cook will serve free samples to event attendees, bowls of chili will also be sold. Attendees will be the judges. Everyone will be given voting slips when they arrive. Judging for the best recipes will be done in four categories: Best Amateur, Best Professional, Best Restaurant, and Best Challenge team. At 2:00 p.m. all votes will be tallied, and the winners will be announced.

McCusker is asking that chili cooks register by Tuesday, January 25 but also said, “Walk-ups will be accepted too, we wouldn't turn any chili away.” A $10 registration fee will only be charged to team entrants, all other entrants will compete for free. To register, simply call Rick McCusker at 916-201-9543 or 775-428-1366. “Cooks will bring their best chili, so attendees should bring their appetites. I'm actually hoping to make the challenge an annual Elks event.”