by Leanna Lehman --  By now, nearly everyone knows that the sequel to the movie “Top Gun” is in the works. The highly anticipated “Top Gun: Maverick” trailer has been recently released, and, if you live in Fallon, Nevada, you might even know that parts of the movie were filmed this spring right here at the Naval Air Station and surrounding areas. What you probably didn’t know was that several members of the film crew stayed in town at the Holiday Day Inn Express during most of the May shooting. Apparently, there was no room at the Navy Inn. Tom Cruise, star of the movie, was on base in February and June for parts of the filming. Cruise, a pilot in his own right, had hoped to fly his P51 Mustang between Fallon and L.A. while working in the area, but ended up staying on station for much his stay here. During the first few seconds of the trailer, the camera opens up over Bravo 20 (B-20) at Lone Rock in the Carson Sink, a playa northeast of Fallon. The B-20 impact area covers 41,000 acres.  Authorized for 2,000-pound laser-guided weapons and JDAM’s, Joint Direct Attack Munitions that are GPS guided, B-20 is the only Navy range of its kind. In its uniqueness, it also provided an ideal place for Paramount Pictures to strap cameras to the belly of an aircraft for a dynamic flight sequence that leaves viewers amazed, if not airsick. As the aircraft banks upward in the opening scene, you can almost feel the playa dust. For that scene, a Navy pilot, formerly with the U.S. Navy flight demonstration squadron, the Blue Angels, flew an F-18 Super Hornet at 30 feet above the ground. The aircraft boasts a wingspan of 65 feet, making banking impossible at that height.  According to Zip Upham, NAS Fallon Public Relations Director, the pilot was flying the aircraft at 400 miles per hour.  After a few passes, crews instructed him to make another pass, but a mere six inches to the right. The expert airman, making a five-mile run at a target that he couldn’t see, hit the mark perfectly –in pure Maverick-Navy-fighter-pilot style. Navy personnel at NAS Fallon, Lemoore, and San Diego handled all the aircraft maintenance and support, provided all flight gear, and the multimillion-dollar fighter jets. “The Navy accommodated the Top Gun Maverick crew in any way they could,” stated Upham, “but flights had to be squeezed in between actual Top Gun training.” As a matter of course, the U.S. Navy charged Paramount significantly for their contribution to the film. Upham, who also coordinated on the project, stated that Paramount was so intent on shooting accurate footage of the movie that, “I think they would have bought a jet if we let them.” Some of the flight scenes seen in the trailer were taken over the Sierra Nevada Mountains and the Cascades in Washington. Moviegoers will experience multiple flight sequences shot from various angles that are nothing less than adrenaline-inducing cinematic gems. In a tip of the hat to the original Top Gun movie here at NAS Fallon, the film crew gained permission to fly two aircraft in descending passes by the control tower on the base. On a quiet Friday night, with a custom-ordered Nevada sunset, the final passes measured 130 feet –behind a tower that measures 132 feet. With the parts of the scene filmed through the tower windows, the scene and the expert flying truly is the stuff movies are made of. “While Tom Cruise and the production team were in Fallon,” Upham states, “They were fun to work with and very supportive of our military personnel.” Additionally, NAS Fallon found Cruise, along with Director Joseph Kosinski and Miles Teller, who plays Bradley Bradshaw (son of Anthony Edwards’s pilot Goose), very professional and focused. “Like the rest of the world, we are eagerly looking forward to seeing the results of their hard work.” The movie is scheduled for release next year -- June 26, 2020. Top Gun Maverick Trailer https://www.youtube.com/watch?v=qSqVVswa420     Sign up to receive updates and the Friday File email notices. Support local, independent news – contribute to The Fallon Post, your non-profit (501c3) online news source for all things Fallon. 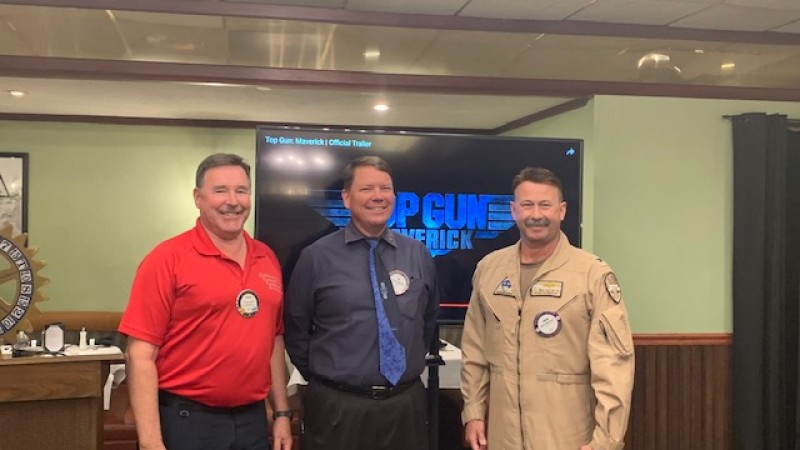 Cub Scouts Weather the COVID Storm as Scouts Should