Omaha Track — Nearly off the rails 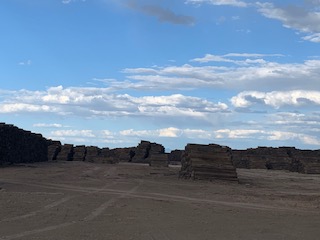 Officials from Omaha Track, the new railroad tie sorting facility in Hazen, faced a potential shut-down a mere two months after being granted a Special Use Permit by the Churchill County Planning Commission.

During the Planning Commission meeting held in April, the number of railroad ties being stored on site proved to be an issue of great concern for both the Commission and Omaha Track. At that time, the number of ties totaled about 500,000 which was far in excess of the expected 150,000.

At the June 12th meeting, Omaha Track reported successfully removing over 150K ties from inventory. However, during public comments, neighboring property owner Joyce Weeks offered a different position stating, “They said they would substantially reduce the inventory. It has increased and not decreased. I have no objection to the company, I just think it’s gotten a little out of control.”

Following Week’s comment, Commissioner Eric Blakey weighed in on the issue as well, commenting that, “I drive by the facility about four times a week and in my opinion, that [the reduction] has not happened.” In response, Jeff Peterson, Omaha Track site planner explained, “You can’t see from the road where the reduction has taken place because it has taken place from the interior.” Lisa Roberts, also representing Omaha Track, spoke up during the discussion stating, “We were given three years, according to the permit, to fully reduce the number of ties to the appropriate levels.”

No questions regarding their inventory tracking procedures were asked by Commission members. Blakey, during the April meeting, recused himself from voting on the permit siting a potential conflict of interest because his company Hot Wire Electric had professional dealings with Omaha Track.

Of even greater concern was a major technicality relating to the final site map of the facility. At present, tie unloading is taking place directly along the track in an area Omaha Track has designated as a “flex” or multi-use zone. Once they receive final approval from Union Pacific Rail Road to tie into the existing track, they plan to move the central operation directly south of where it now lies, freeing up the flex zone area.

According to the map received by the Planning Commission, the area in question was designated as a buffer zone for the purpose of creating a neutral space between the facility and nearby residences and not a flex zone. Omaha Track brought the discrepancies between the two maps to the Commission in hopes to have the permit updated with the correct map.

According to Peterson, several unforeseen delays by UPRR are keeping them from beginning construction as quickly as they had hoped. As a result, a water well must be drilled in the flex/buffer zone rather than the originally designated location. With the dust, a critical issue, continuing to outsource the water during the driest time of year is not practical nor ideal for Hazen residents. While it would have been ideal to install the well in another area, they cannot wait any longer. Nor can they absorb the expense of drilling two wells.

The position of Omaha Track is proving to be a precarious one. When presented with the map discrepancies, the Commission initially felt that their options were limited. Over the course of the meeting, members discussed the various factors at play and proposed revoking the existing permit and requiring Omaha Track to start the process over again.

When asked by the Commission what would happen if they were forced to move the operation out of the flex/buffer zone, Roberts explained, “Right now, the only way to remain operational is to continue to unload at the current location. If we have to move the ties out of the buffer zone, within nine months we will have to stop operating.”

Ultimately, after over an hour discussion, it was decided that Omaha Track was operating in an area zoned for industrial use and met the minimum requirement for distance to a residence of 100 feet. Furthermore, even though their Special Use Permit was issued based on an incorrect map, Omaha Track wasn’t in violation of any of the terms of the SUP. Some language will have to be amended in the Notice of Final Action so that the legal records accurately represent the operation as is.

Greatly relieved at the outcome after such a tenuous discussion, Nathan Strong, executive director of CEDA explained that a great deal has gone into the project up to this point. Omaha Track is providing jobs and contributing to the area's economic growth and “I am glad they can proceed while waiting on Union Pacific.

The ordinance now headed to County Commission for consideration

Planning Commission Election of Officers for 2022