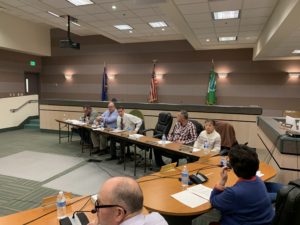 by Leanna Lehman -- The Churchill County Planning Commission met March 13th and took action on the following items: Temporary Use Permits: Several residents faced harsh questioning and reproof from planning commissioners as they sought renewals for their temporary use permits. Two property owners applying for permit renewals, sited escalating construction costs as partially responsible for delays in completion and are exploring the option of manufactured housing instead of stick-built homes. Margo Weldy of Purple Sage Lane received a 90-day extension on her TUP, and strict conditions were set for her to meet by the end of the three-month period. Weldy stated that she was waiting on the renewal of her permit before beginning her remodel and has been busy with fencing and outbuildings. Nathan O’Brien, owner of a parcel east of the Lovelock Highway received permit approval, also with time-sensitive conditions to be met regarding road access. A temporary use permit was renewed for David and Samantha Roberts on Bell Aire Lane for caretaker quarters. Sending Site: The Commission approved a sending site application for Kathie Minner off of Lone Tree and Curry Road near the NAS Fallon Bravo-16 range. The parcels included approximately 147 water righted acres of 246 total acres. A sending site is referred to as a TDR, Transfer of Development Rights of land or a parcel to “preserve lands with a public benefit” according to the County’s Master Plan. “Transferring development rights is forever,” explained Commissioner Blakey,” ensuring that Minner was fully appraised of the binding effect. Zoning: Isaac Morrison spoke to the Commission on behalf of New Nevada Resources, LLC regarding parcels located near Bango Road and their application for an industrial zone change on two parcels totaling approximately 453 acres. The adjacent parcels are owned by Safety Clean and EP Minerals and are currently zoned for industrial use.  Rezoning was approved by the Commission with discussion of an impact study to be conducted at a later time. Special Use Permits: Commissioners reviewed the existing SUP for Craig Travis at 12830 Carson Highway for his land application of domestic septage. Travis and Churchill County planning director, Michael Johnson confirmed there had been no NDEP violations or complaints filed during the past two years. Several neighbors spoke in support of Travis. A special use permit application was approved for a daycare facility to be added at Logos Christian Academy.  There is no construction planned as Logos is using space within the current facility for the pre-k classes, according to Pam Duarte, Logos Headmaster. Isidro Alves, the owner of Sand Hill Dairy, also received special use permit for a milk and cheese processing plant to be built within the existing structures on the dairy. Nathan Strong, director of Churchill Economic Development Authority, CEDA, spoke in support of Sand Hill Dairy along with several close neighbors. Safety-Kleen Systems, Inc: Scott Miller and Drew Lee representing Safety-Kleen presented to the Commission the facility and operational upgrades that have been made since they acquired Bango Oil. Safety-Kleen has invested several million dollars in the plant and has made application for a special use permit allowing a 20% increase of throughput that will bring the amount of oil recycled from approximately 22 million gallons to over just 28 million gallons. According to Miller, there will be minimal impact to neighbors or county resources. Approval was granted despite air quality complaints from neighbors, with assurances from Safety Clean that they will continue to operate within NDEP permit perimeters. To read more about Safety-Kleen, click here: Omaha Track: Community support was evidenced for Omaha Track’s proposed rail based service facility in Hazen as TCID Director Rusty Jardin, CEDA Director Nathan Strong, and Drew Roschli of Black Gold Terminals made public statements supporting the project. Several Hazen residents expressed concern about the road conditions and dust, both of which both Lisa Roberts and Jeff Peterson of Omaha Track addressed. They have been working on different methods of mitigating these issues, and a road agreement with Churchill County had been signed that day. Presently, the Hazen facility is storing and sorting over 500,000 railroad ties, at the site with Peterson called a giant railroad tie recycling facility. Omaha Track is working to sell, recycle, and use the ties with the intent to reduce the number of ties at the Hazen location to roughly 150,000. NDOT has requested that traffic study is completed, and the Bureau of Reclamation sent a letter requesting protection of Newlands Project facilities. The Commission approved the permit for Omaha Track to move forward with and construct a rail-based railroad tie sorting and distribution facility, setting additional conditions that Omaha Track must meet.
Publisher