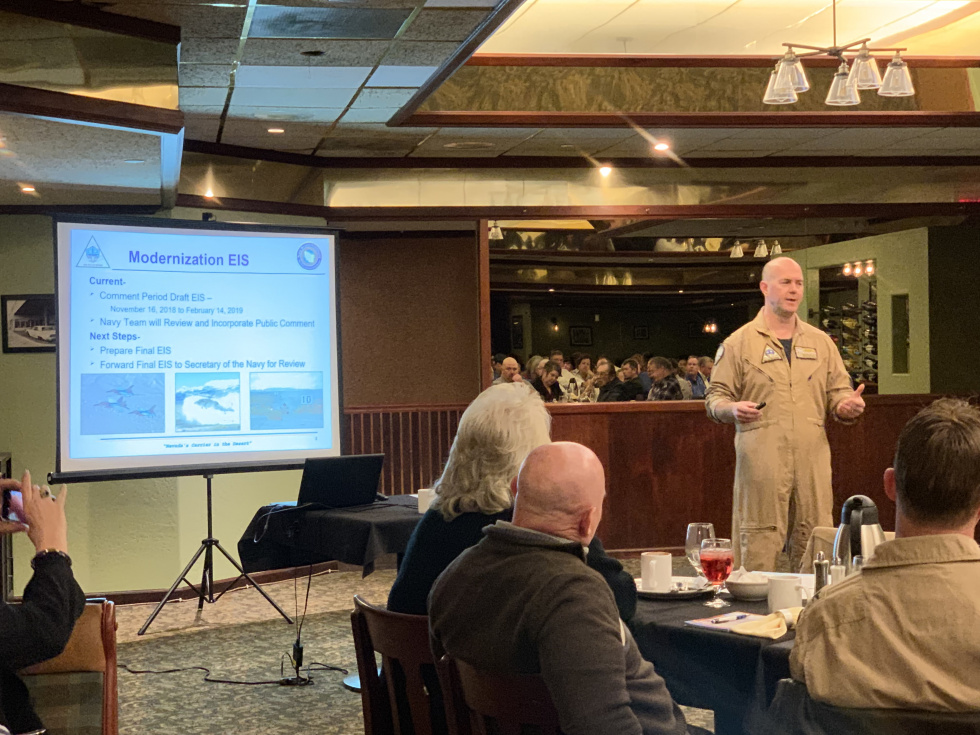 by Rachel Dahl -- Captain David Halloran gave his last presentation to the community on Wednesday at the Churchill Economic Development Authority Business Council breakfast. He retires from the Navy after 27 years, and officially hands over the base to Captain Evan Morrison at the Change of Command today. Referring to Naval Air Station Fallon as the Navy’s “Aircraft Carrier in the Desert,” Halloran contributions the Navy makes to the Fallon community as it carries out the “critical” mission of preparing for and maintaining freedoms. “This is a strategic asset and the Navy is putting a lot of money into it and will continue to for a long time,” he said. In addition to generating $517 million for the local economy, NAS Fallon provides $84 million in direct payroll for personnel working at the base in 4,586 jobs, and creates $22 million in state and local taxes. “We are required to train properly,” said Halloran. He said the growth of technology and the advancement of our adversaries, means we aren’t preparing for conflict the way we should. “North Korea can hit us, Russia is rebuilding, and China has had a 30-time defense budget increase,” he said. These countries have greatly expanded the realm of where they can go, but they still don’t have the logistics capabilities we do. However, Halloran said China does has an advantage over us in their training and preparation because they don’t have regulations or democracy to contend with, meaning they have as much land and resources as they want. “We haven’t been training our pilots for the past 20 years the way we should.” He said the NAS Fallon ranges haven’t been modernized in 30 years. For the past two years, Halloran has been working on the Fallon Range Training Complex Modernization which would expand the ranges and modify the airspace around Fallon. There have been many public meetings, and the comment period for the Draft Environmental Impact Statement just closed. The process will continue until the final document is approved and sent to Congress for approval and appropriation of funds. Halloran talked about the REPI program, Readiness and Environmental Protection Integration, that provides funding to buying agriculture easements that prevent future development protecting space around the base and the ranges. The Navy is also investing heavily in several military construction projects on the base and Halloran said will continue for at least five more years, using local contractors and construction companies. This growth will result in at least 200 more jobs over the next three years. “We have not gone against a near-peer adversary in 30 years,” said Halloran, “we need this base so if we have to go to blows we are prepared.” Halloran has spent most of his life moving around the world and said he’s never had a home town. After 13 “change of stations” during his 27 year career, he and wife Maggie will retire here in Fallon with their two children. “I have never been stationed anywhere where there is such a welcoming relationship between the Navy and the community as there is here” said Halloran.
Publisher 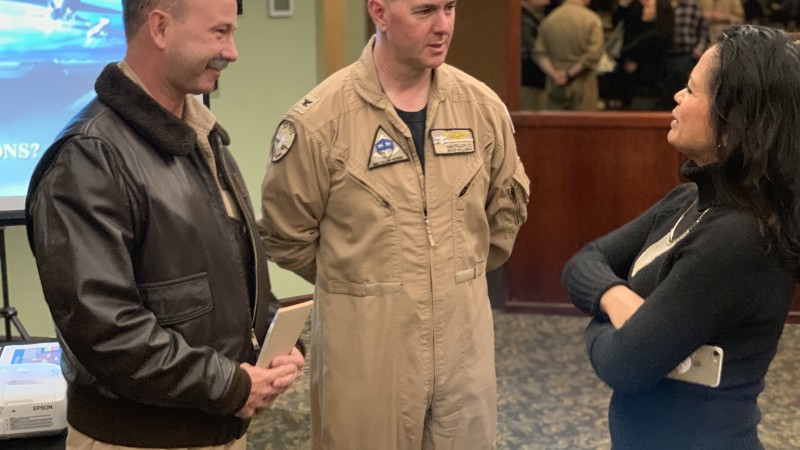 Welcome to the New CEDA

The Fallon Chamber has moved locations and is now co-located with Churchill Economic Development Authority at 448 W. Williams next to Nevada State Bank
SUBSCRIBERS
Click here to log in
Support our Work