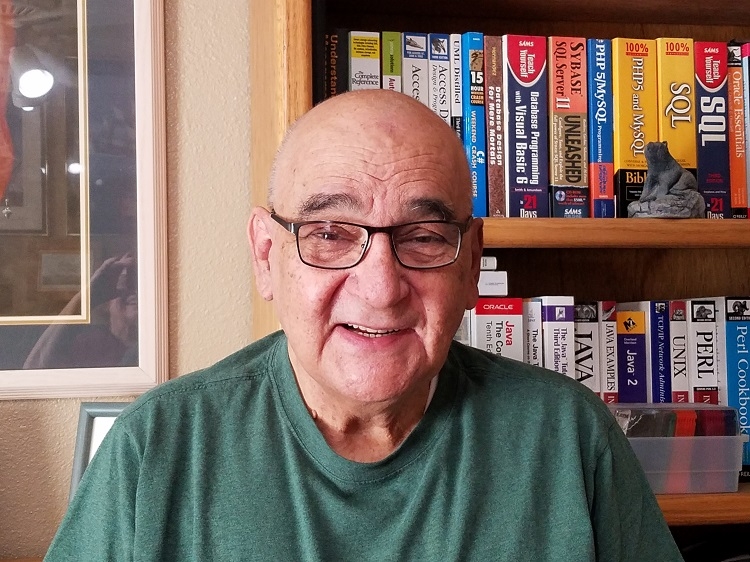 Chief Petty Officer Steverson retired from the Navy in August 1989 and began his career in Information Technology installing the first computer system at the New York Life San Diego General Office. Two years later, he was hired by Coleman College to teach the Information Technology track.  In August 1999, Tony graduated from National University with a master’s degree in Telecommunications Systems Management.

In January 2000, Tony was hired by Lockheed Martin, NAS Fallon to manage the base IT systems.  By May of that year, Tony and his wife Julie moved from San Diego to Fallon.  In October 2001, Tony joined CACI Intl, NAS Fallon, which was contracted to install the Navy/Marine Corps Internet (NMCI) information technology system for the Base. While working for CACI, Tony was diagnosed with End Stage Kidney Disease and on September 2, 2002, he received a kidney transplant.  During his recovery, Tony earned a master’s in Applied Project Management from Villanova University, and in 2005, he completed a master's in Information Systems and Technology Project Management from Villanova University.

In 2004, Tony was hired by the Veterans Administration as Chief Information Officer (CIO) for the Sierra Nevada Veterans Hospital Reno.  During his 10 years as the VA Hospital CIO, he managed the opening of the northern Nevada VA rural clinics, including the CBOC in Fallon.

Tony began teaching evening IT courses at University of Phoenix from 2002 to 2004.  In 2013 joined the Nevada System of Higher Education as adjunct faculty, teaching classes intermittently for Western Nevada College and Truckee Meadows Community College.  From 2019 to 2021, Tony taught Introduction to Information Management STEM classes at Fallon Oasis Academy. During 2001, Tony also was full-time online faculty, SCI Acquisition Co Inc, Austin Texas.  Finally, on April 4, 2022, Tony was hired by Churchill County as the County IT Professional to manage the county IT systems, and internet security, and develop a permanent IT department for the County.

Tony loved the rural life in Fallon. He spent his weekends working on his classic Pontiac Firebird or building things around the property. Tony could also be found in his office tearing apart computers and rebuilding them with more memory, better graphics, or whatever while he listened to classic rock and roll music. He enjoyed watching fantasy and science fiction or British murder mysteries on TV.  Tony was funny and full of stories or pieces of information on almost any subject.  And he was always available whenever a friend or family member was in need.

Tony is survived by his wife of 52 years, Julie, daughters Valerie and Patricia, nine grandchildren, and five great-grandchildren.  Memorial services will be held at the Veterans Cemetery Chapel in Fernley as soon as a date can be set after Thanksgiving.

Sarah W. 2022-11-21, 04:25 PM Tony was a one of kind! I enjoyed our interactions while working with him at the County. He had a witty personality and a big smile. My condolences to his family and friends. May he rest in peace.