Music, Magic, and Memories in Fallon 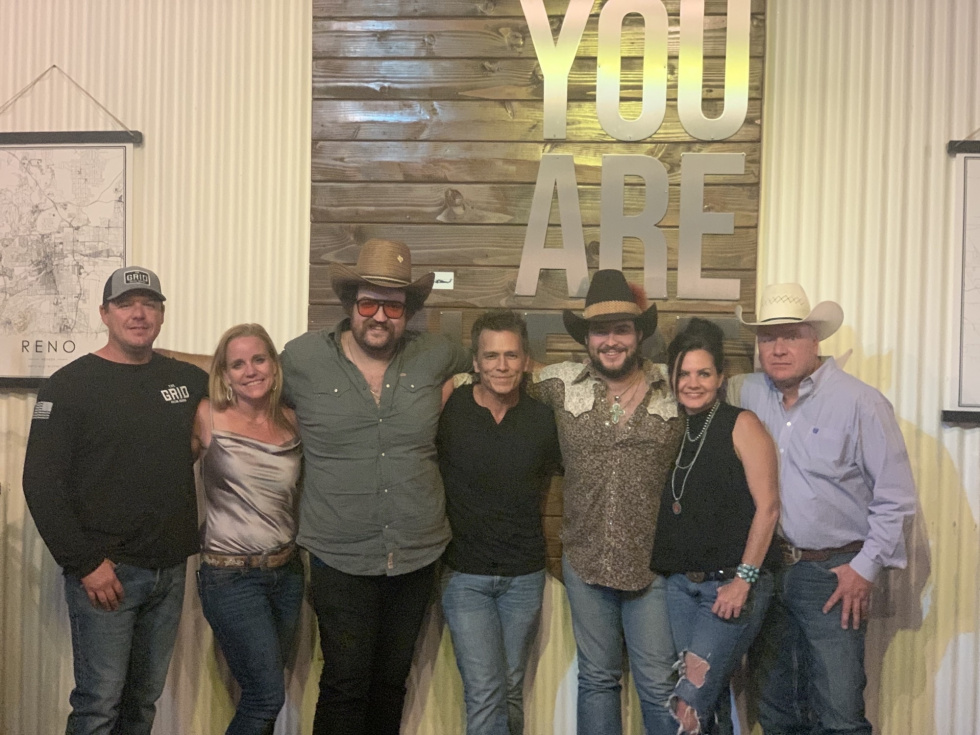 Fate and family can be curious things. Often intertwined, they can take us down paths we never imagined – or even better, down those paved with dreams born in childhood. Down dirt roads and long lonely highways, magic can spring out of the most unlikely places. Even out of the small crossroads town of Pahrump, Nevada.

It was nothing less than destiny that brought the Reeves Brothers to Fallon. Their plans went badly awry shortly before they were scheduled to play a show at a local event earlier this month. Unforeseen circumstances left them far from home with no place to perform – losing money and time with each passing hour. Fate stepped in, leading them a few miles down a country road to land comfortably enjoying the hospitality of Kim and Vaughna Bendickson, their daughter Darcie, and her partner and custom boot maker, Ty Skiver.

When Darcie and Ty learned that this troupe of classic country musicians were without a stage to perform on or an audience to sing to, they made a few calls. Before the band had a chance to pack up their gear and bail out of town, they met Paul and Tiffany Picotte, owners of The Grid Brew Pub and Restaurant, and a new gig was on the books.

Then it was show time.

Within the first few chords, the music emanating from the stage seemed to transport the audience back to another time when country music was rich with the talent of legendary artists like Hank Williams Jr., Merle Haggard, and Johnny Cash. The Reeves Brothers were bringing more than a few good songs to the stage, but something much more. Magic.

The group’s nostalgic sound packed the house and seemed to move both the old schoolers and the young bucks. It was evident to all that the Reeves Brothers were doing something remarkable. Not only did they take the crowd back in time, but they were taking them home – home to a simpler time when the music was pure, and people felt connected.

Sons of country music man Jack Reeves who spent the 60s, 70s, and 80s performing in L.A., Cole, and Matt Reeves grew up on guitar strings and soundboards. Living in a mobile home behind the iconic Pahrump Stag Stop casino, they learned about country life and country music. Mom waited tables while Jack played solid gold standards by the likes of David Allen Coe, Waylon Jennings, and other outlaw country greats. The brothers would join them after school to hang out with their parents while they worked (away from any gaming, of course). Music was a part of their everyday lives. They often found themselves up on stage with their dad while he was performing, and before long, the brothers found they also had a passion for making country music.

By the time Cole and Matt were young adults, they were pursuing independent solo careers. However, that changed in 2016 when they decided to reunite. Once back together, they began making magic. Their first album, “Home Sweet Honky-Tonk,” was evidence they had something extraordinary. By 2018, they were awarded the Honky-Tonk Group of the Year, which was shortly followed by a record deal. According to an article showcasing a Reeves Brothers performance in Tennessee last year, their latest album “The Last Honky-Tonk” is the best Reeves Brothers album to date and was described as having a “Merle Haggard meets Alabama sound that will have you craving a shot of Jack Daniels.”

What does it take to make music this good better? In this case, you bring in yet another member of the Reeves family – Scott Reeves. A bit older than his cousins, Scott did not grow up in Pahrump, but in Arkansas where the family originates from. And he was no mere addition to vocals. He had been carving out his way in the entertainment industry for many years by the time the cousins came together.

Scott had enjoyed a successful and longstanding career in Hollywood as a star in the daytime dramas General Hospital and The Young and the Restless, as well as playing several roles on various television series like King of Queens and Chicago Hope. But Scott had more to offer the younger Reeves than acting talent. In 2008, he began playing and performing as part of the Blue County duo, which earned him a record deal. By 2011, he was writing music for county music superstar Toby Keith. Scott had made a name for himself in the country music capital of the world, even performing on stage at the Grand Ole Opry.

Scott Reeves soon became an integral part of the lives and careers of the up-and-coming Reeves Brothers. Initially, he planned to go on tour with Matt and Cole and document the shows and their experiences. According to Scott, it was something he had always wanted to do, and with a little nudging from his wife, Scott hit the road with his cousins. He now manages the band and at times, performs with them, bringing his incredible talent to the stage.

The Reeves Brothers' performance at The Grid was a win-win for everyone involved. Circumstances brought them a new gig, new friends, and even new boots. “The most comfortable boots I’ve ever worn,” said Scott. As it turned out, they were all sporting new hand-crafted cowboy boots for the show. Ty and Darcie of Skiver Bookmakers gifted them all custom-made pairs and are now sponsoring the band so they can perform in comfort and style.

There is no doubt, a lot of talent flows through the Reeves genes. With any luck, they will return to Northern Nevada and bring with them their authentic honky-tonk sound, both with classic covers and unique songs that take us back in time and help up enjoy today.