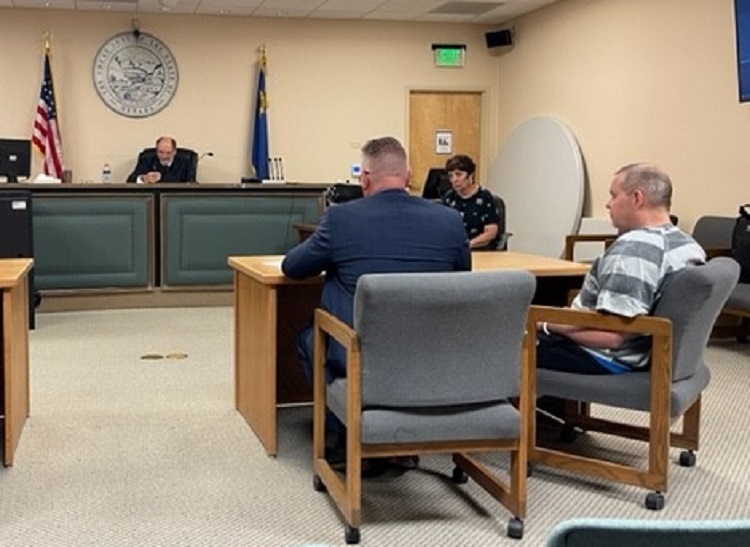 An annual hearing in the matter of the competency of John O’Connor was held in the 10th Judicial District Court today before Judge William Maddox. O’Connor is charged with the murder of Charles “Bert” Everett Miller.

On July 22, 2018, O’Connor entered the Richards Street Building of the Church of Jesus Christ of Latter-Day Saints in Fallon while hiding a handgun under his shirt. Upon entering the church during Sacrament Meeting, it was reported that he shot Bert Miller (age 61) several times using a concealed firearm. According to reports, O’Connor also shot Duane Miller (age 64) who survived the shooting, and then aimed the gun at Mike Whitaker, but did not fire upon him.

O'Connor, who faces First Degree murder and other charges, has been in residence at Lakes Crossing Center in Sparks, Nevada. Lakes Crossing aids the courts when determining a defendant’s mental competency to stand trial is in question. O'Connor has undergone lengthy and comprehensive forensic psychiatric evaluation and treatment since shortly after his arraignment in February 2019.

Assistant Deputy District Attorney Chelsea Sanford, representing the state, said that the seven-page report from Lakes Crossing was dated July 18, 2022. She read from the report saying, “The defendant continues to exhibit ‘fixed false beliefs about the alleged victim as well as others who reside in the community, so this community is at risk if he is ever released.’ He suffers from mental illness that he has yet to acknowledge, and it seems to be expanding, as is reflected in the report.”

Sanford continued, “We hold that the State should hold Mr. O’Connor in custody based upon the findings in the report. Mr. O’Connor is not currently a candidate for conditional release.”

Representing O’Connor, Attorney Richard Davies agreed with the findings in the Lakes Crossing report. “This report seems to be consistent with the reports we’ve seen over the last few years. Certainly a thread is starting to weave a pattern here that is consistent. It shows he is not competent, and I anticipate being back here a year from now.”

Maddox ruled that there was, “Convincing evidence to continue his placement in the custody of Lakes Crossing. He remains a danger to himself and to the community.”

Last year in his ruling after the annual hearing to determine competency, Maddox said that the Lake's Crossing psychiatric staff concluded that O’Connor is legally incompetent for the purpose of standing trial and is unable to aid his own defense, rights which are guaranteed under the U.S. Constitution. Further, it was determined that he would not be able to meet the competency guidelines in the foreseeable future, if at all.

After the hearing, Davies said, “The doctors at Lakes Crossing have determined he is still not competent, that he suffers from delusions that prevent him from aiding and assisting in his defense. That’s consistent with the original reports that we received when the event occurred.”

By statute, the annual reviews will continue for ten years, but there is a provision that allows the prosecutor to seek an additional five years. According to Davies, this hearing marks year four. Davies said the doctors have said he suffers from a delusion. “There is a storyline there that was curious from the beginning and what lead us to this situation.”

Conceivably, O’Connor could eventually get out of Lakes Crossing. “There is a possibility of a conditional release that is provided for by law,” said Davies, “there are quite a few hurdles for that to occur and that would take a lot of input from Parole & Probation, the doctors, certainly the D.A., but the doctors would have to find that he is not a harm to himself or to the community.”

Davies said when mental health is an issue there is a whole different track of statutes and case law that come into play.  For now, O’Connor is in a therapeutic environment where his medication is being monitored, he is in counseling, and he is in classes. “They’re trying to treat him to competency, that is the goal,” said Davies.

And if that happens, and he is found to be competent, O’Connor would then stand trial.

Heidi Ayers, Miller’s daughter was in the courtroom with her brother, Brian. “I’m glad to hear that he will continue to be at Lakes Crossing, knowing what a threat he is to our community,” she said.

kenneth_taylor 2022-09-03, 11:29 AM Its been four years now since Berts death. It is sad his family has been denied any sort of justice. May Bert rest in peace.