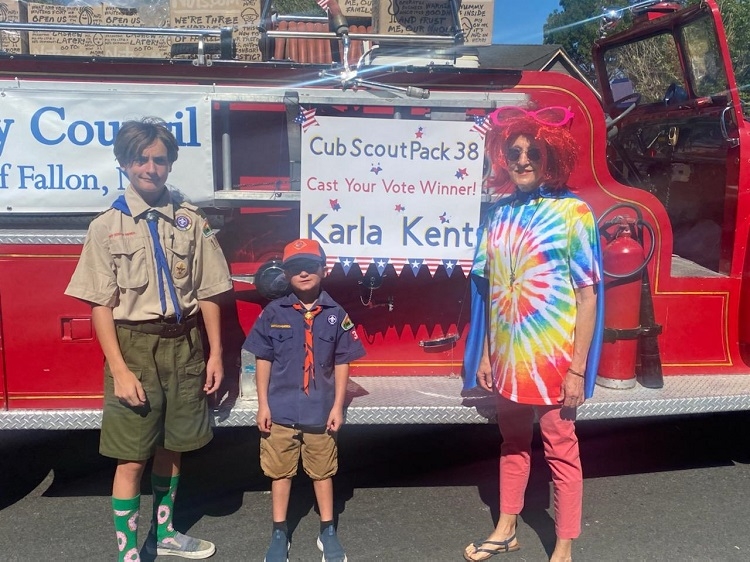 The Fourth of July is always a cause for celebration. Fallon's Cub Scout Pack 38 added to the celebration with their “Cast Your Vote” fundraiser. The scouts generated $700 in voters’ donations as the public voted for their favorite Fallon celebrity.

This year's winner by $80 in votes was Karla Kent, Fallon City Councilwoman, and owner of Kent's Supply Center. Karla was awarded a wacky costume chosen by Pack 38 to wear while riding on a fire truck in the July Fourth parade.

Pack 38 Leader Carrie Arcoraci described this new fundraiser. “We were looking for interesting ideas where the kids didn't have to actually sell something. The pack is made up of youngers that range in age from kindergarten through fifth grade. So, we came up with the “Cast Your Vote” fundraiser and then had to recruit contestants. We got four people to agree: Sheriff Richard Hickox, City Police Officer Jessica Zamora, Karla Kent, and CCHS Vice President Rachel Knight. We put four Pringles cans at five different locations around town, one for each contestant, where people could vote for their favorites. We also had a QR code for voting, too. A donation amount of the person's choice was made with each vote, and the more money the person put with their vote, the stronger the vote was. For example, a $1 vote wasn't as strong as a $20 vote. Whoever raised the most money was the winner.”

“When I walked into Kent's Karla said, 'Oh, this isn't good news, is it?' I put the bag on the counter, congratulated her, and told her she'd be on the back of the fire truck in her silly wig and tie-dyed t-shirt. She was a really good sport.”

Arcoraci said they would like to run the fundraiser again, and it will be aligned with one or both of the parades. “The parade is public, and we want it to take place somewhere where the winner is embarrassed just enough for it to be fun. All four contestants were very willing and excited to participate.”

The next fundraiser for Pack 38 will be their popcorn sales outside Walmart, Safeway, Big R, and the Navy Commissary from August 19 through September 18. They will also be selling door-to-door through October. Arcoraci said, “We do a car dry in June at American Car Wash where for a donation the Cub Scouts will dry the cars assisted by adults who can reach the higher spots. The last one raised about $700, too.”

The cub scouts earn free tickets, t-shirts, and other awards for their efforts. Recently, Pack 38 took a road trip to the trampoline park in Sparks where the kids had earned free tickets. “Scouts is very much about you earning your own way. We require they participate in fundraisers if they can. If they participated in the car wash, or the Scouting for Food where the food is collected for low-income and seniors, or other stuff like that, then you got a free ticket to the trampoline park. We also provided discounted rates for the scout's siblings or parents to attend.”

Pack 38 is celebrating 35 years together this year. They are chartered by the Rotary Club of Fallon with Chelsea Sanford as their Charter Representative, and as of today, the pack has 24 scouts.

It's referred to as a family pack now, but it always has been. “We've always had girls around. We allow the siblings of the scouts to attend events, and they participate too. But they weren't able to wear the uniform or get recognition for what they did – and now they can. It didn't really change much of how we run things or what we did. We do family camping once a year, you have to camp with your family. So, having your sister there was just how it went. And nationally, it's moved toward involving all of the kids in a family, not just the boys. We have 5 girls now in their own cub scout den that are part of our pack.”

Arcoraci said Pack 38 participates in numerous events each year; the Home and Garden Show, the car wash (dry), the Scouting for Food drive, the Cast Your Vote, and the popcorn sales which is their biggest fundraiser of the year. She also said they are planning a Flocking fundraiser for the spring where flocks of flamingos will show up in someone's yard, and then they can pay the pack to have the birds removed or pay to put the birds into someone else's yard.

Monies raised are used to pay for Pack 38's national and council dues, as well as fund all of the activities they do together such as the Pinewood Derby. “All of that is covered by dues, and the kids can raise the money to pay for their dues instead of their parents writing a check. We don't want the parents to pay. We want to encourage the kids to earn their dues.”