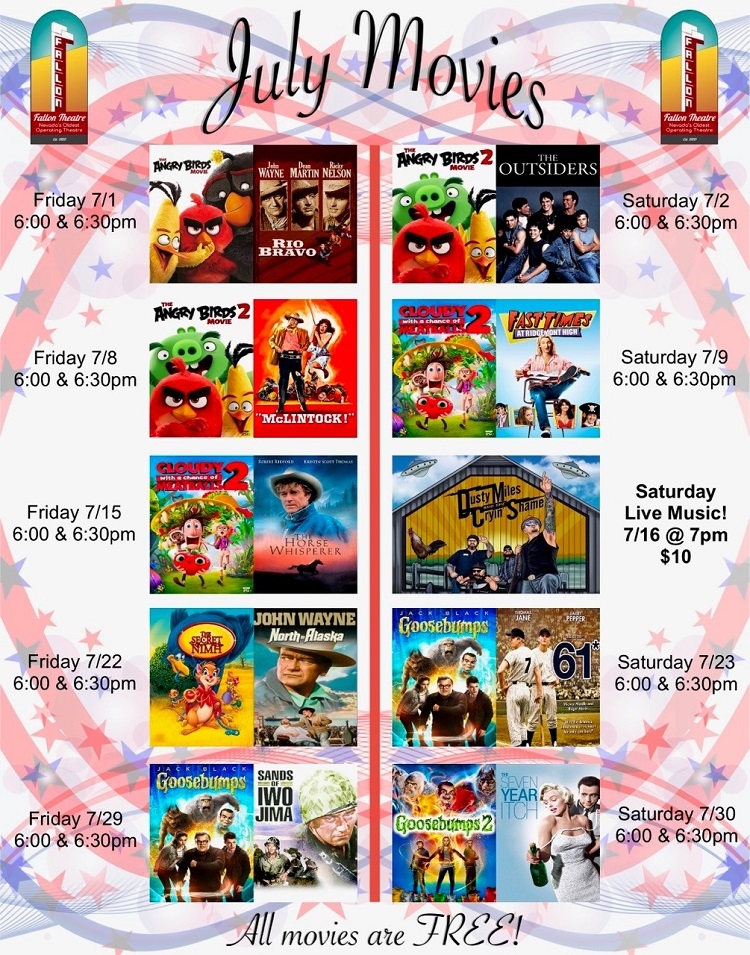 Your Community-Owned and Operated Fallon Theatre

Hello movie patrons - we will now be showing two movies both Friday and Saturday.

Starting Friday, July 1st at 6 p.m. our first movie of the night will the 2016 animated comedy adventure “The Angry Birds Movie” - when an island populated by happy, flightless birds is visited by mysterious green piggies, it's up to three unlikely outcasts to figure out what those pigs are up to. Featuring the voices of Jason Sudeikis, Josh Gad, Maya Rudolph, and Bill Hader. At 6:30 that evening we will be bringing John Wayne back to the screen in the 1959 film Rio Bravo. Where a small-town sheriff enlists the help of a disabled man, a drunk, and a young gunfighter in his efforts to hold the brother of the local bad guy in jail. The western also stars Dean Martin, Ricky Nelson, Angie Dickinson, and Walter Brennan.

Saturday evening, at 6 p.m. brings us the 2019 sequel “The Angry Birds Movie 2” - in the sequel to the previous night’s film the flightless birds and scheming green pigs take their feud to the next level. Starring the voices of Jason Sudeikis, Josh Gad, Leslie Jones, and Tiffany Haddish. At 6:30 we will be showing Director Francis Ford Coppola’s 1993 drama “The Outsiders” starring Matt Dillon, Tom Cruise, C. Thomas Howell, Rob Lowe, Emilio Estevez, and Patrick Swayze about the rivalry between two gangs in rural Oklahoma heating up when one gang member kills a member of the other gang.

On July 4th, we will be open after the parade and participating in Fallon's 4th of July community celebration. With cartoons showing for free, you too are free to come and go as you please. The concession stand will be open.

On July 16th the Reno area band Dusty Miles and The Cryin' Shame will take the stage for an evening filled with great music. Doors open at 6 p.m. Tickets are $10.

See you at the movies - and concerts!

After a forced hiatus the past two years in deference to Covid, Community Theater is back in Fallon. The new drama teacher at Churchill County High School, her students, along with…

At your community-owned and operated Fallon Theatre