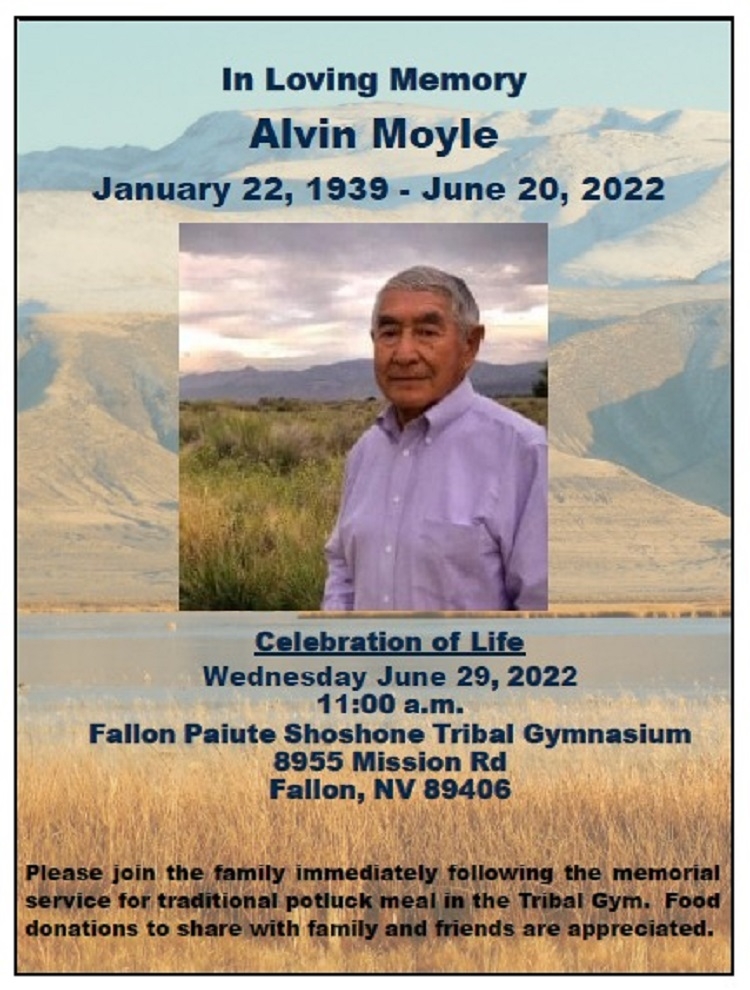 Alvin was a man of integrity, who had a unique way of un-complicating even the most challenging of situations, always trying to do the right thing whatever the situation. His clarity of thought and analysis has guided the tribe through some of the most difficult of political times in history. He has proudly served the Fallon Paiute Shoshone Tribe for 22 years.

He was a United States Marine Corps Veteran, a loving father and grandfather, a great leader, and a hard-working Cowboy. Alvin’s contribution in leading his Tribe were distinguishably recognized by Tribal leaders, government officials, and dignitaries. His involvement included the repatriation of ancestral remains and he aided in the improvement of Fallon Tribal issues that allowed for increased delivery of services which included Housing, Health Clinic, Natural and Cultural Resources, Education, Environmental, and Transportation.

Alvin was instrumental in the creation of the Fallon Tribal Development Corporation to assist the Tribe’s economic development efforts and served as its first President. In addition, he testified before a select committee of Congress in Washington D.C., testified in Federal District Court, and presented a brief regarding Government to Government relationship with the State of Nevada, State Governor, Kenny Guinn. He was a Nevada Associate for Four Directions Inc. of Mission, South Dakota, assisting with the development of Official Voting sites at the Pyramid Lake and Walker River Reservations. He also worked to implement agreements with Nevada Energy and Black Rock Solar for the installation at various tribal buildings; pursued the removal and replacement of potable water delivery systems; was instrumental in the purchase and development of Fox Peak Fallon and Fox Peak Fernley stores. Alvin also regularly attended meetings as the leader of the Tribe at the White House under the President Barack Obama, and testified before select House and Senate committees on the matters of Health Care Reform, trust responsibility of the Federal Government, land restoration, and the needs for a Nevada IHS Area Office and the Nevada Indian Health Board, as well as being a key figure in the construction of the Fallon Tribal Health Center.

The Fallon Paiute Shoshone Tribe has been blessed through his leadership and guidance and will miss him dearly. The contributions he has given to the Tribe and local community will always be a testament to his direction and leadership. We ask for you to respect the privacy of Alvin’s family and the Tribe during this difficult time. His funeral Services will be held on Wednesday, June 29, 2022, at the Fallon Paiute Shoshone Tribe’s gymnasium, 8955 Mission Road, Fallon, at 11:00 a.m.

Ron Anglin 2022-06-23, 08:40 PM I’m sad to hear of a great person as Alvin. We had many talks over the year both spiritually and tribal issues. I first worked with Alvin to re-intern the remains found in Stillwater marsh after the great flood in 1985. He was a wonderful person and the world is a sadder place with his passing. He helped me with many difficult issues that I had to deal with personally and professionally. Goodbye my friend. I will see you another time. Ron Anglin.