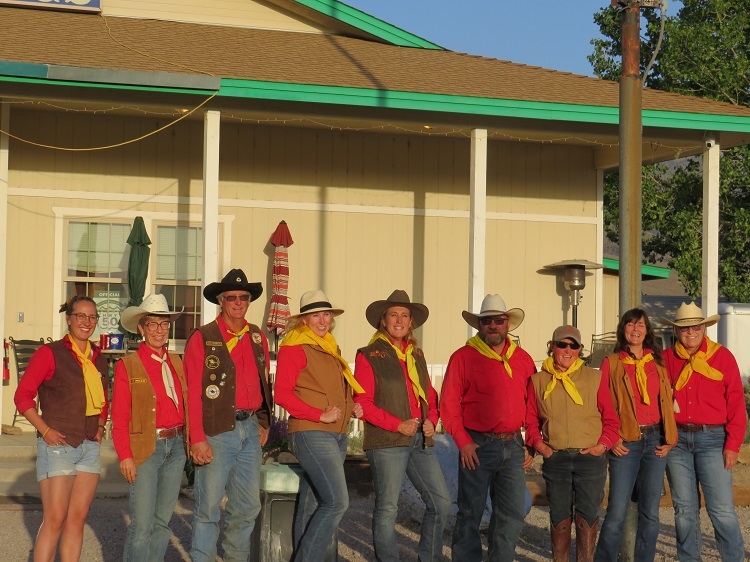 The logistics alone are staggering – 1,900 miles through eight states with 750 riders posted every two to three miles, riding their piece of the original 1861 trail. Horses, people, radio operators, maps, the media, and most important – the mochila.

Every June the National Pony Express Re-ride re-enacts history and delivers 1,000 letters by “Pony Express” from St. Joseph, Missouri to Sacramento, California. Local Pony Express teams across the country come out to take a “leg” with seven or so riders, leap frogging each other to cover their stretch, each rider getting a chance to ride at least twice.

Gary and Kathy Mills had the chance to carry the mochila on Tuesday night when riders reached Cold Spring Station about four hours later than expected. Earlier in the day a rider in eastern Nevada had taken a wrong turn and gotten lost, causing the backup. Recovery of the lost rider ate quite a bit of time and the Cold Springs crew ended up riding in the dark under a day-old full moon.

“It was a bit scary riding all out in unfamiliar territory at night,” said Kathy, “but exhilarating at the same time.” She said their team was amazing and working with Captain Christina Brennan and the support crew went very well. “We were able to make up an hour and a half,” and by the time they handed off to the next team at the Sand Springs Summit had managed to cover 36 miles in just over four hours.

Gary said everything went like clockwork for their team. “It was a bit unnerving to ride through washes and ravines at night,” he said, “But the amount of people involved in this thing – I was in awe of the amount of people and their care to make the ride as accurately as possible.”

The Mills joined several riders from the Reno area along with Doug Berkley, a long-time rider from Kansas, and his friend Anne Wortel who is from Holland. Berkley has ridden in the re-ride for the past 30 years in his home state. This year he has set out to ride a leg of the Pony Express trail in every state. “I’m not trying to set records or anything, it’s just a personal thing,” he said. “I’m not getting any younger, and I have good horses.” Since he found someone willing to make the trek with him it seemed like a good time to go this year.

Anne came all the way from Holland for the ride. That and to see Doug. They’ve been seeing each other long-distance for six years now, their relationship surviving the pandemic and now 10 days across the U.S. desert. ort

“I’m not good enough yet to ride this,” said Anne laughing, “so I’m the driver.” But she did finally become an official rider, pulling a stretch of the trail in eastern Nevada.

Berkley is alternating two strong Morgan horses and as far as he knows is the first rider to have ridden the trail in every state.

By Wednesday, the Nevada riders were able to make up all the lost time and handed off the mochila to the California team 45 minutes early. The 10-day event kicked off on June 10 and is scheduled to culminate in Sacramento on June 16. The mochila and each rider are tracked with a device that allows anyone to watch the progress in real-time on the National Pony Express website. At the time of this writing, the mochila is approaching Placerville (Thursday, June 16).

[email protected] 2022-06-22, 05:28 PM Dear Rachel and Jim, thank you for this great article and keep up the good work! Thanks for sending us the paper version. Love your magazine and your website! Annemiek (Anna) from Holland (NL) and Doug from Kansas (USA)

Paving work will continue through late summer, followed by utility, signage, roadway striping, and other final elements of construction.
SUBSCRIBERS
Click here to log in
Support our Work