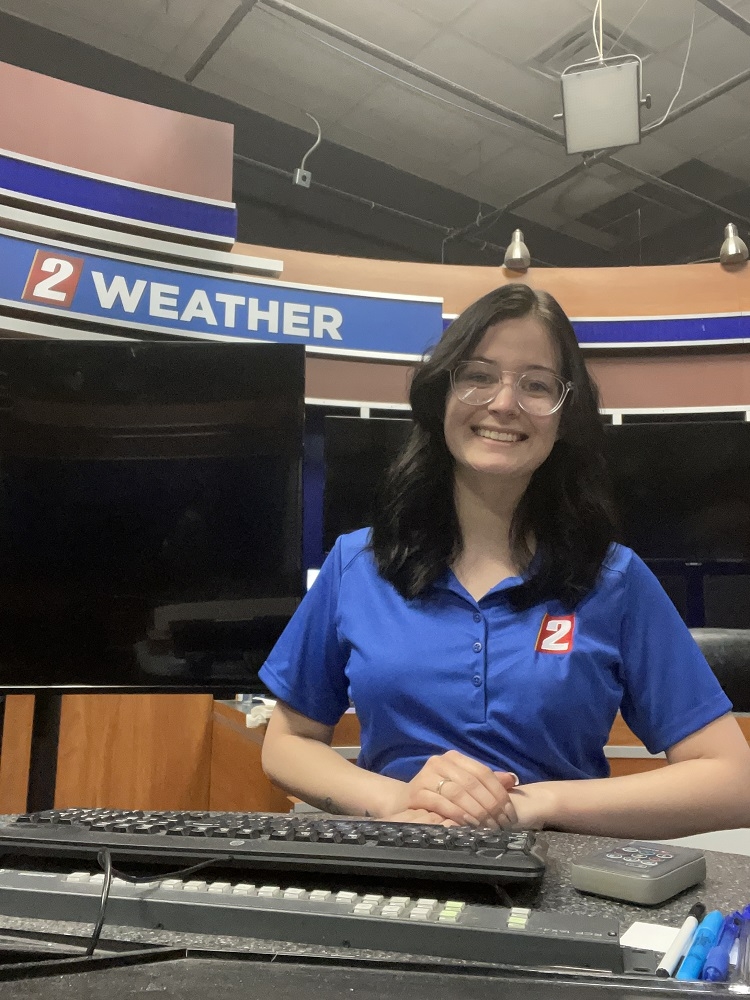 Working behind the scenes at KTVN, Oasis Academy alumni Kaylynn Perez has quickly climbed the ladder from Associate Producer to Producer of the 7 p.m. and 11 p.m. news broadcasts.

The quick pace of the news is nothing new to Perez. The exceptional student graduated from Oasis Academy in 2019 earning both her high school diploma and Associate of Arts degree from Western Nevada College. Then in just two years graduated from the University of Nevada, Reno in 2021.

“I went straight to work. I didn't want to waste any time getting a job in the field I studied. I wanted all those hours at the Journalism school to pay off,” said Perez who averages working sixty hours a week in a job she loves.

The News Producer also has her future goals set out. “I have plans to work more in investigative and crime news. I'd really love to make crime documentaries and be able to spend time putting together crime stories. I'm a true crime junkie, what can I say. As an investigative journalist, I would love to be able to meet people from all over and share their stories. Especially if they survived something traumatic or be able to help a family who may have lost a loved one,” added Perez.

“Sometimes journalists help piece together a case alongside police. And I'd love to be able to produce documentaries on big headline stories. Having my name on a Netflix series is the dream.” Eventually moving to a bigger market in her favorite city, San Francisco is part of making this dream a reality.

Perez also has a soft spot for politics and has looked at a future in Washington D.C. “Washington D.C. is the news capital of the world and I've always felt a calling there. I've had some journalist friends who moved there recently and it's always in the back of my mind,” she added.

While these are both possible Perez has learned two things while working in news. The first is, “nothing is permanent. It's okay to not be sure you want to do something forever. My true goal is to let my career take me where it takes me,” she explained.

The second is, “Do what makes you happy. Life is more than money and making sure you can afford that big house with a picket fence. There is a saying in the news world - ‘we ain't here to get rich.’ Journalists don't make much, but we do it because we love it. I started to feel insecure for a while because I knew people going on to be doctors or engineers or therapists, who would be making way more money.”

“While I first started out making less than my restaurant job, I soon realized, I love my job. And that's all that matters. I come in every day with something new. News is constantly changing; my job is constantly changing. I get to draft stories about kids helping the food bank, and veterans holding a memorial for their fallen friends, and I get to send reporters to crazy fires in Lake Tahoe. And inform all Northern Nevada of what is going on in their state. I get to talk to CBS reporters and producers in Washington D.C. and New York to organize live shots from the White House or Uvalde, Texas. I get to see crazy footage from wars overseas all from my little desk in Reno, Nevada. And I love it. While I don't make as much as I could doing some other office job I would never trade it for the world,” explained Perez.

“You need to put your dreams and happiness first. Again, nothing is permanent. There is no written rule in life that says you have to do something forever. Do it because it makes you happy and if it doesn't make you happy anymore, don't stay. You are free to move on to a new job, new workplace, new career,” Perez wanted to conclude with, “no one should ever be miserable in life because of their job. There will be bad days. But love what you do and have a passion for what you do. And don't let anyone make you feel indifferent about your dreams.”

OACP Freshman and Sophomores Finishes Off Year with Projects

Each year Oasis Academy College Prep Freshmen and Sophomores complete an intensive interdisciplinary project to close out the year. The projects melded topics that were discussed in English, Math, Social Studies, and Science together in one large assignment. The presentations then counted for a portion of the grade in each class.

Freshmen were divided into groups to focus on the Tragedy of the Commons. This year’s projects were centered around environmental issues, such as littering and greenhouse gasses. They were tasked with researching ecology for science, creating graphs and charts for math, preparing written and oral presentations for English, and researching the history of what has worked in other places for the problem for social studies.

Sophomore projects were done individually. Each student was randomly assigned a city to move to and an occupation. Again, extensive research on the area and salaries for that occupation had to be done. This Included calculating moving costs, a budget, and finance for basic living costs for math, the economics of the area for social science, preparing a written and oral presentation for English, and a nutrition plan and environmental study of the area for science.

“The end of the year freshman and sophomore projects are quite extensive. The research needed to be successful with the assignment will aid the students as they transition into the more intense college classes their junior and senior years.” said Science Teacher Jackie Bogdanowicz. “It’s exciting to see what the students learn; one sophomore even calculated his carbon footprint this year!”

Oasis is thrilled to introduce Mr. Glenn Wallin for the 2022-2023 school year. Mr. Wallin will be teaching Middle School Science. He has spent the last eight years working as a high school health/physical education teacher and athletic director. He has a Bachelor of Science in Biology.

Before solidifying a career in education, he spent time either chasing fires on a hotshot firefighting crew based out of Elko, NV or playing indoor football for several teams around the country.

Outside of the educational setting, Mr. Wallin can be found mountain biking, hiking or spending time with his family. His family consists of his wife, Kelsey, their old pup, Ziggy and two young boys; Kash (25 months), Cooper (5 months).