Berney Realty Has a New Office 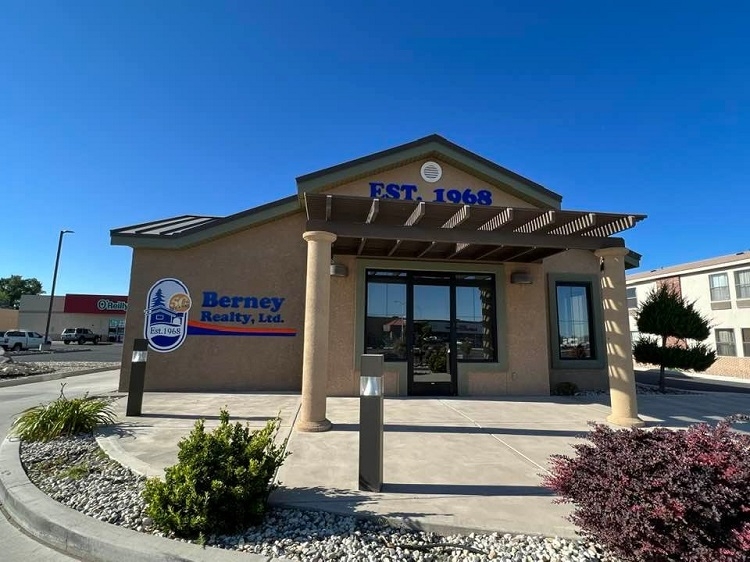 The building was first a Starbucks, then Dahl's Pharmacy occupied the space. With Norcutt's influence, the inside now looks nothing like it did for those two occupants. She bought the building in May 2021, and in January Hammond Homes and Construction began the reconstruction project that completely renovated the building in less than six months.

The new space now has a main reception area with a raised panel L-shaped desk, twelve agent offices plus a conference room, an agent rest room, and a break room. The restroom that is off the reception area is the only original room left in the building. All of the infrastructure – heating, electric, plumbing – is all new. “We redid everything. We took out walls and reconstructed the whole interior. We had to do a lot more heating and air and electrical due to all of the new offices. We incorporated the tall ceilings, restucco'd part of the outside where the four new windows were added. We bumped out that section on the west side of the building by three feet to eliminate the drive-up window and square it off. That 11-foot by 3-foot addition gave me space to create two agent offices on that side. The roof already extended over that area, so we just had to fill it in. We didn't have to make any changes to the roof.”

Norcutt picked out all of the color schemes with input from her agents. “I wanted to include them as much as I could. It's a very similar color scheme as my house, it's just naturally what I look for and gravitate to. My agents would come and look and help me decide. We knew we wanted individual offices for everyone and a home feeling. It's a real estate office but we still wanted to keep a small-town farm style and look.”

Berney has 12 full-time agents working at the office now, and the conference room could be used as another office if needed. Norcutt's business has grown since she purchased it in 2008. “It's been really fun for us. The town of course has been wonderful. Berney had been in the old location since 1968 so it was also an emotional decision. And I wasn't sure if moving the business here was going to be the right decision after being there all that time.”

The visibility and access of the new location were both very important to Norcutt, so she leaped and is very happy she did. “I enjoy older buildings and appreciate their architecture. I appreciate antiques. I also have a passion for things that have been in place for a very long time. I really don't like to move but I always wanted to be on this side of town, and always thought this would make a great real estate office. There aren't many buildings that become available on this side of town, and when they do the remodel was more than what I had to do here. The outside, the commercial improvements, the landscaping, and paving were all in place. So, I thought this might be the opportunity, and maybe I could make this move.”

Norcutt wanted to ensure the transition between the two locations was as seamless as possible to minimize disturbances and stress. Having both buildings at the same time made it possible for Berney Realty to continue to conduct business while the construction was being done, and once it was the agents began bringing in their furnishings and other things that could be moved in early. “I wanted it to be easy for my agents and me to move. Basically, just clear our desk off there, and set it up here. We can move stuff on a Sunday and be ready to start here on Monday or Tuesday.”

“I think it's important to keep things out in the open with your employees and then they feel like they are a part of it. And that's important to me, knowing that they are a part of it too. I have a really great team. We are super close, and that makes it easy for them to tell me how they feel. Their input helps me to make the best decisions I can make for the office as a whole. Some of the agents have been with Berney for over 30 years. Gosh, I've been there for 20 years, and we have one agent that been there for almost 40 years. So, for that person to be excited about this move, that's really something. It's really nice to have a fresh start too.”

Berney Realty's grand opening of the new office is scheduled for July 13, “after we've had 30 days to work out all the bugs.”

JoeN 2022-06-19, 02:07 PM Does this mean they are going to tear down that obstruction that blocks the view of oncoming traffic when turning onto Williams from Ada Street?

When can you choose retirement?

Party at the Barn on June 29, at 6 p.m.
SUBSCRIBERS
Click here to log in
Support our Work