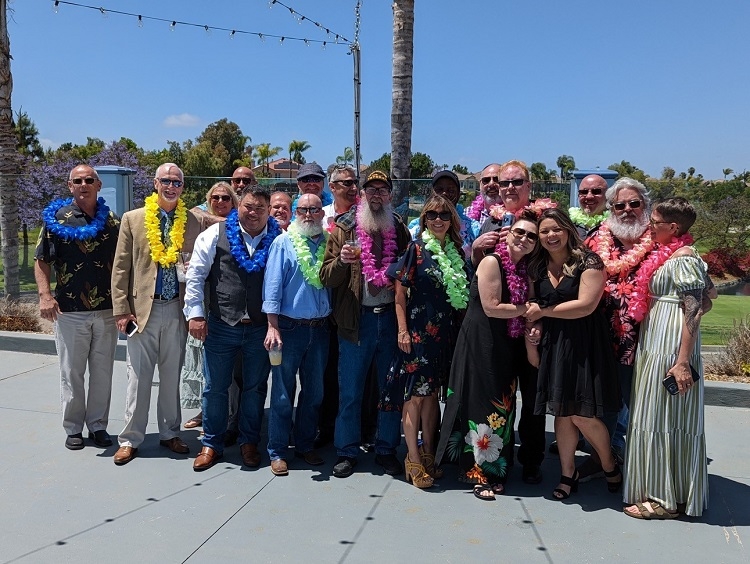 While central Nevada and Fallon communities are bemoaning mid-May snow flurries, I am revisiting the sunny skies and ocean breezes in Point Loma, California. Neil and I hit the road last weekend to celebrate the life of his mentor and our dear friend, Robert Young who passed away last February. We are re-connecting with Neil’s shipmates from the first boat in his naval career and visiting places that were significant to us in the early days of our relationship.

The memorial kicked off with an emotional military ceremony at Fort Rosecrans on the top of Point Loma overlooking the Pacific Ocean. There was a bagpiper, an honor guard, and the most soulful rendition of taps played by a young active-duty woman on the bugle. After wrapping up the formal ceremony, our large party made our way south to Chula Vista for a luau-themed celebration of life. Bob was a huge believer in the Hawaiian concept of Ohana–a word that directly translates to “family” but means family by choice in addition to the family by birth. Bob’s Ohana gathered together to shepherd his soul into the universe with Hawaiian shirts and leis, tears and smiles, ukuleles, and hula dancing. It was beautiful, uplifting, and heartbreaking.

You can enjoy the tastes of a Hawaiian luau with your Ohana with the help of a slow-cooker and some creativity, rather than the trouble of burying a whole pig.