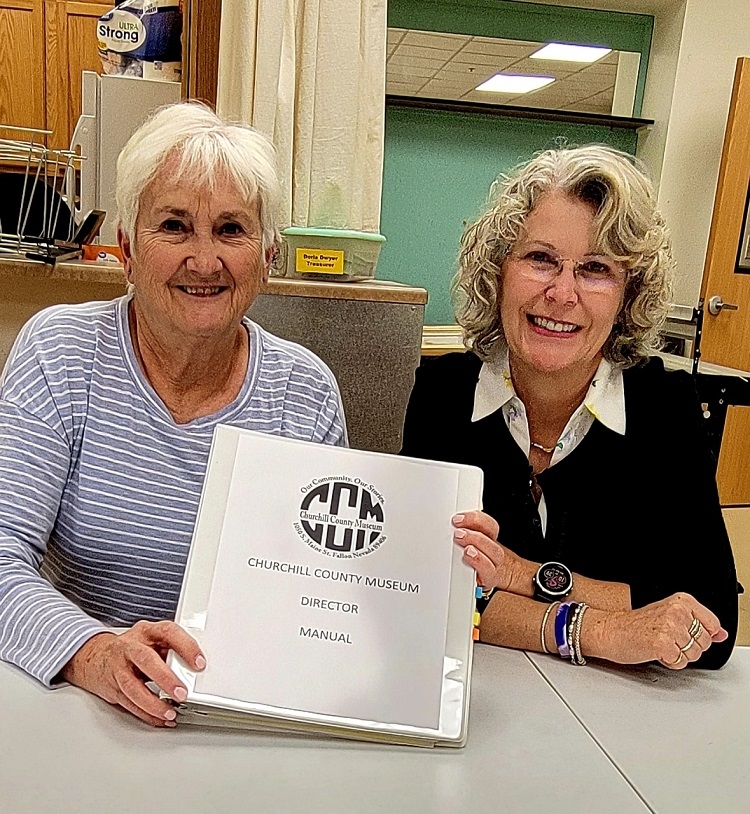 It would seem that Teri Hedgpeth, Churchill County Museum Director for the past year, has been in that saddle for more than just a year given her accomplishments. With programs such as Night at The Museum, Birds of Lakes and Marshes, Museum Estate Sale, Museum Book Sale, the Black and White New Year's Eve Celebration, the Blast from the Past Spring Luncheon, and a multitude of lecture series events, her time here would seem much longer. But she has accepted a new position in New York City and is handing the reins of this gem to Museum Association Board of Trustees President Sue Chambers on an interim basis.

Chuckling, Hedgpeth said, “I do get a lot done. It's been fun, it really has. As soon as I got hired, Sue came in and said, 'Oh, by the way, you've got the Soroptimist Home and Garden Show', which was just a week or so later. Trial by fire, I guess.”  Programming is lined up until January, giving the new Museum Director a running start. The museum board also recently approved an investment in high-density digital storage, art rack storage, and other storage rack systems, the behind-the-scenes things needed to secure the health and care of the collections.

Hedgpeth has accepted a position as Director of Archives for Madison Square Garden Entertainment which she said includes the Garden, Radio City Music Hall, the Rockettes, Hulu Theater, Beacon Theater, the Chicago Theater, and the Sphere in Las Vegas. She has expertise in brand management, and with rights and use of objects and entities from her years with the Olympic Committee. “The Garden has some amazing things on display, from sports memorabilia from the NY Knicks and Rangers, to concert instruments such as Billy Joel's piano. It's a unique and diverse collection, so I'm really looking forward to working in such an iconic place.”

Chambers somewhat saddened said, “Teri's departure was a surprise to us. She's done so much in the last year and involved the Board a lot in what was going on. It was just very comfortable working with her. We are going to miss her a lot. While it is the museum board's responsibility to maintain the collection, working with Teri made that easier.”

Hedgpeth said her position at the museum was mostly administrative, fundraising, and outreach to the community. “It's always been my goal to make the archives relevant, and we've advanced that here. I wasn't bad at fundraising because I don't mind asking. I just don't really like doing it. I'm not even good at asking. I just buy the tickets myself rather than try to sell them.”

It came as a surprise to Chambers when asked to be Interim Director, happening the day before Hedgpeth's last day. “Being asked was a big surprise, but it is just to get us over the hump until the new person is brought in. It gives the staff some consistency, and an added benefit is that I know the staff, not as their director but as someone they know can make decisions for them. I'll keep track of all the projects that the staff is working on for the new person, too.” When asked if she'd like to stay on permanently, she replied, “No, I'm in retirement, and don't have the background for it. So, no. But I do have a manual.”  Hedgpeth said that when she started, Curator Rae Sottile created a binder for her that helped her to see what the current vision was. Her Director's Manual goes steps further to include contacts around the community, where to find things, and how to get things done. “I always try to leave things better than the way I find them, and the director's binder is something I can do for this position.”

County Manager Jim Barbee told Hedgpeth, “We appreciate everything you've done for the museum and for the county, and wish you much success in your next position. You're leaving this in good hands with Sue until a permanent Director can be hired.”

In a May 5 memorandum to the County Commissioners, Barbee requested approval of an agreement for professional services with Sue Chambers to serve as Interim Director of the Churchill County Museum retroactive to May 1, 2022. “The County's Museum Director accepted another employment opportunity, and her last day of work was Friday, April 29, 2022. The director position was posted on April 28, 2022, and is open until filled. The county manager and human resources director met with the museum association's current President, Sue Chambers, and approached her about serving as the interim museum director via an Agreement for Professional Services until a new director is hired.”

Hedgpeth summed up her experience here saying, “The City of Fallon and the county have embraced me, welcomed me with open arms. It has been a wonderful experience, and I've made friends here. This has been a wonderful experience. I planned to stay, I bought a house and got a dog. But then a friend messaged me about this new position that matched my skills to a tee. I applied and it was very quick when the offer came. So now I'll at least be in the same time zone as my husband and kids.”