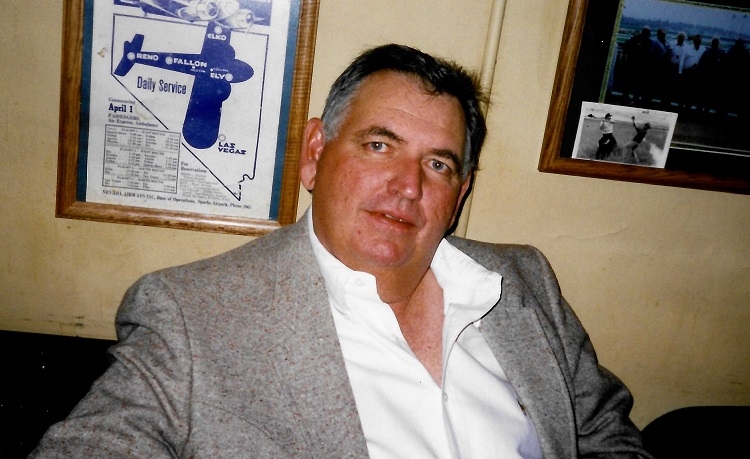 Tim Gallagher passed away at Renown Hospital on April 30, 2022, at the age of 72. Tim was born in Pasadena, California on December 23, 1949, he was the son of Thomas L. and Imogene Cashbaugh Gallagher. Tim grew up in Fallon, was very active in 4-H and FFA, and was a Nevada State FFA Vice President. Tim graduated from Churchill County High School in 1969. He attended California Polytechnic State University at San Luis Obispo, graduating with a B.S. Degree in Agriculture.

After college, Tim returned to Fallon and worked with his father, Tom at Gallagher Livestock Auction Yard. After each lot of livestock was sold, the auctioneer would proclaim “Let `Em Go” to clear the arena, this quickly became the slogan of the family business.

He married the love of his life, Debbie Beck, in Fallon, on May 11, 1997. They were proud to carry on the ranching legacy residing in their historic Harmon House, which had been built in 1906. Tim and Debbie raised alfalfa and cattle.

In 2005, Tim retired from active participation in the Auction Yard and purchased a Sea Ray 42-foot boat. Tim and Debbie kept the boat at the Sacramento Delta, where they enjoyed entertaining friends and family with barbeques and boat trips. They loved mini-vacations on the waterways. They enjoyed fishing and dinner with friends using a Boston Whaler.

A celebration of life will be held at the American Legion Hall, 90 N Ada St. Fallon at noon on Saturday, May 14th.

Claude Ezzell 2022-05-06, 06:08 PM Tim was without a doubt a legend in the Town of Fallon. Many people will remember him in their most desperate moments as the person who gave them a hand up. Rest in Peace Tim and from a grateful town thank you for all that you did to make Fallon a better place.

Cortney Dahl 2022-05-06, 08:37 AM Tim was passionate about FFA. When I was the FFA Advisor here, he told me many times how important FFA was and how he wanted that experience for every kid in the valley. Not a lot of people know, but he fully funded and sponsored the "Gallagher Award" every year to pay all the expenses for a student that hadn't had the opportunity to go to National FFA Convention yet. We had an application process that involved a written application and personal interview to determine each year's winner. The students who won these awards have now gone on to achieve great things, and I'm confident that those experiences were the springboard to inspire them to greater heights in their lives. Who can put a price on that?

Pat Backman 2022-05-04, 04:41 PM So sorry for your loss, Debbie.Bud and Tim will move a bunch of cattle up there and hope they don't get lost. Thoughts and prayers going out to you and the famlly.