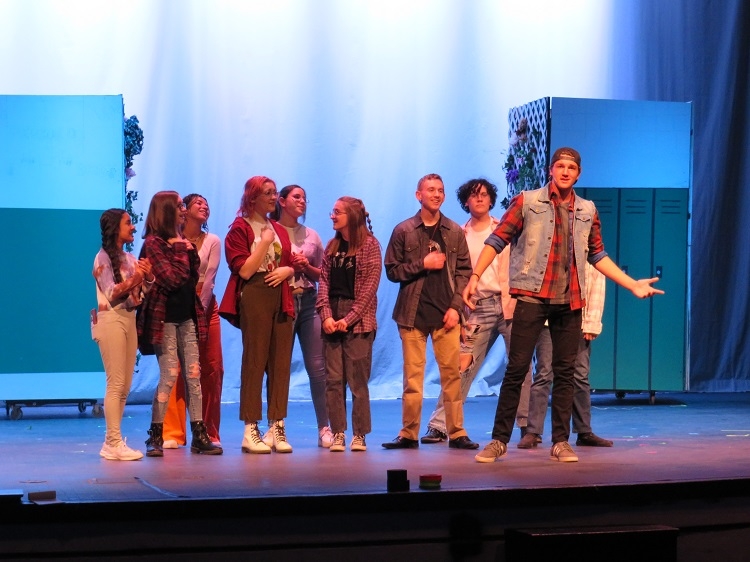 Rachel Dahl Sandra Marquez Garcia, Leah Bake, Sofia Basurto, Kass Perrotta, Ambra Illiano, Kennedy Irving, Matthew Melancon, Jackson Moon, James Sorensen and Miles Henning behind James Sorensen.
After a forced hiatus the past two years in deference to Covid, Community Theater is back in Fallon. The new drama teacher at Churchill County High School, her students, along with several community members have been working since late January to bring the old favorite, Freaky Friday, to life for the community audience.

Fallon has a long-standing tradition of Community Theater musical productions going back to the early 90s when a troup of talented, local thespians produced “Oliver” at the Churchill Arts Council Barkley Theater.

After a forced hiatus the past two years in deference to Covid, Community Theater is back in Fallon. The new drama teacher at Churchill County High School, her students, along with several community members have been working since late January to bring the old favorite, Freaky Friday, to life for the community audience.

We all remember the movie when an overworked mother and her teenage daughter magically swap bodies, they have just one day to put things right again. “Freaky Friday,” a musical based on the celebrated novel by Mary Rodgers and the hit Disney films, is a heartfelt, comedic, and unexpectedly emotional update on an American classic. By spending a day in each other's shoes, Katherine and Ellie come to appreciate one another’s struggles, learn self-acceptance, and realize the immeasurable love and mutual respect that bond a mother and daughter.

Shows are on April 29 and 30 and May 6 and 7 at 7 p.m. with a 1 p.m. matinee on May 7. at the CCHS Theater. Tickets are on sale now online at bit.ly/CCHSFreakyFridayTickets or at the door.

Ashly Adams directs the show, with Jan Bice and David Ernst providing the music. Adams received her BA in Theatre Arts with an emphasis in Secondary Education. She previously taught and directed for five years at Adams City High School in Colorado and five years at Spanish Springs High School. She has directed nine musicals and ten plays, including “Shrek the Musical,” “Beauty and the Beast,” and “Footloose.”

“When I was interviewing for the position,” said Adams, “Mr. Mike Hogan, mentioned that there had been a community play every other year and I was excited to carry on the tradition. I decided to hit the ground running in my first year here in Fallon with a community show, so I reached out to people I knew had been a part of it before and tried to spread the word on social media and in the community.”

Senior Kamiah Henning, like the entire cast, is very glad to be back on stage. She has been singing since she was five years old, a student of Dana Barton, and has performed in several previous community productions including “The Sound of Music,” “Annie,” and “Seven Brides for Seven Brothers.”

“I’m really excited to be working with these really talented people. They are great role models. Summer and Timothy are amazing to be around and to learn from,” she said. “The play is funny, there is a lot of humor and adults can relate, but so will teens and even the little kids. It is very relatable, and the aspects are very real.”

Henning plans to attend the University of Nevada in the fall and will major in early education. She will continue to participate in the performing arts program as well. “Theater, singing, choir have been a big part of my life and I don’t want that to end with high school.”

Adams said her favorite part of the play is when Mike tells Katherine that Ellie can be mad. At the time Ellie is actually in Katherine's body and it is the first time she feels seen by an adult. She's been struggling to accept Mike into her family, but he gives her permission to feel what she feels and act like a teenager when she struggles to meet her mother’s high expectations for her.

“We spend a lot of time together, it’s like a little family,” said Henning. “This is how it has always been in all the productions; this one is no different.”