Found in Fallon – New Friends and Adventure Right at Home 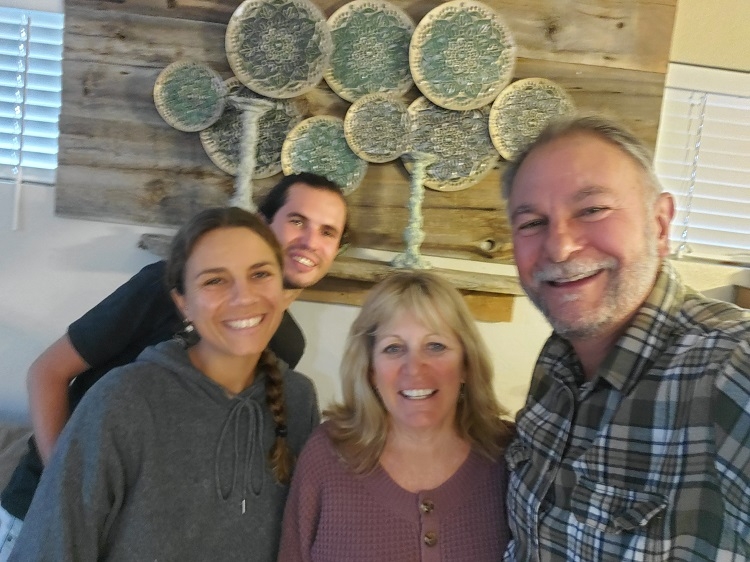 Charlie Arciniega Loic and Marie with Carol and Charlie

Frequently during our long summers, we are accustomed to the sight of bicyclists, saddled with gear, passing through town. Sometimes in groups, oftentimes solo we see riders if not daily, certainly on a weekly basis, riding, shopping, or resting on their journeys. Carol and I have often wondered about their various travels, where are they going, where have they been, why are they doing this??

Just last week, out of nowhere, well, actually from Carson, came at least some answers to our questions. Carol received a text from a friend, who because of her connections at our local hospital had received a query from a traveler (one in the medical field who travels on a contract basis from place to place) from upstate New York about some friends of his who were biking cross country and looking for a place to sleep in Fallon that night. We called Dan in New York and he explained his young friends from France, both 28, were biking cross country and Fallon was their next stop.

After a brief conversation, we agreed to welcome them.

Around 4 p.m. on Thursday afternoon we looked out and there were Loic and Marie. We garaged their bikes and showed them to their accommodations. After they cleaned up and their laundry was going, we sat down to dinner.

They are both pharmacists and met Dan while they were working on Guadeloupe in the Caribbean and Dan was there on vacation with his family. Marie is not much of a bicyclist, only riding occasionally. She prefers riding horses and is actually quite an accomplished show jumper competing every weekend. She hopes one day to own her own horse.

Loic rides his bike with friends once or twice a week and enjoys basketball, tennis, and taekwondo. They both enjoy snow skiing.

Their plan is to journey from San Francisco to Montreal, Canada in 90 days. Chicago is their planned halfway point, they hope to meet people and improve their English, which is quite good, way better than our French, oui, bonjour.

On Friday morning they packed their gear onto their bicycles (110  pounds of gear each!) after a breakfast of pancakes, strawberries and blueberries. They departed around 9 a.m. after hugs and safe travels – destination Middlegate. We bid them adieu and asked please keep in touch.

We received a text on Saturday saying they had arrived in Middlegate early Friday. Then, and I quote Loic, "What a city!! People were very nice."

Maybe after all the road is not so lonely.