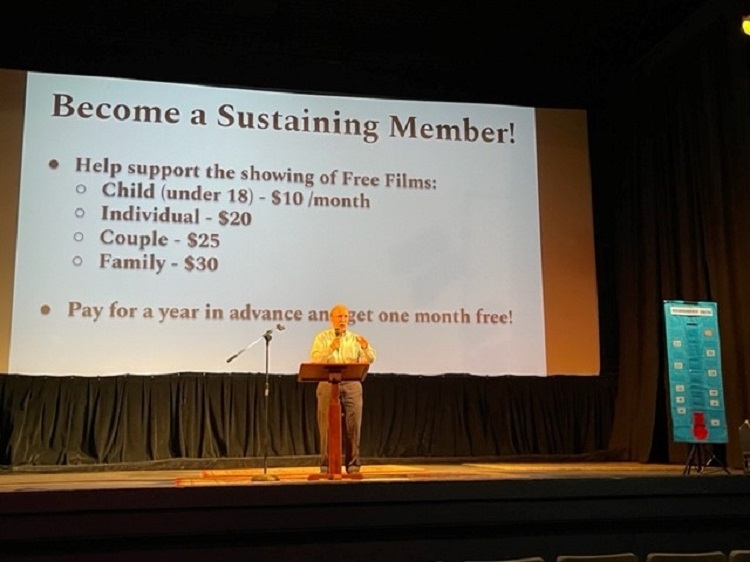 The Save the Fallon Theatre organization, Fallon Community Theatre, met on Monday night for their annual meeting to hear a report of accomplishments and kick off a Sustaining Membership Drive in hopes of encouraging more community members to take advantage of the next 100 years at the Historic Downtown Fallon Theatre.

The mission of the group, which was started in 2015 to save the theatre which had fallen into disrepair and was in danger of closing, is to renovate the building and maintain the facility as a theatre and a place for community presentations and events. As the anchor of downtown Fallon, FCT is dedicated to preserving the theatre for future generations.

“We want to keep downtown active and alive,” said Stuart Richardson, President of the FCT group.

And preserve it they have. Over the past seven years, Richardson reported, they have been able to completely remodel, rebuild, reroof, and restore the theatre to a facility that is serving to bring classic movies, local bands, comedy shows, plays, car shows, and family parties. Richardson explained each project that has been completed, thanking the volunteers and local businesses that have made each step possible.

Early on the group was awarded a USDA Rural Development grant that allowed them to purchase digital projectors at the time film movies were becoming obsolete. This gave them the ability to transition to the digital format movies are shown today and kept the theatre viable. They also received a Community Development Block Grant in 2017 that allowed the group to buy the building outright and they now operate debt-free.

A generous contribution from Scott Tate at the Nugget/Bonanza allowed them to buy new seats to replace the ones that volunteers had recovered with the local quilting groups in recycled jean material and a great amount of work. Local boy scout troop 44 has had several members complete their Eagle Scout projects, including Orin Sommer and Thomas Jaimeson, by doing various restoration projects including replacing the cloth wall coverings. Enel Green Power also sent a crew to paint the entire entrance and lobby.

Before she passed away, Mary Carter donated money to buy a cash register system that modernized the concession stand as well as replaced the curtains on the stage.

Ralph Mills from the Depot Casino donated carpet for the lobby and had it installed and Carpet Connection donated materials to lay new laminate flooring through the building. Oasis Air Conditioning and Heating also came to help install the new cooling system and recently the group received a grant from the State Historic Preservation office to replace and install a new roof.

The meeting also gave members a chance to thank and present certificates to several volunteers including the Berney Family which has given untold hours to the project, from Josh and Lexie painting to Michelle running concession stands, and Mike shepherding grants and providing the weekly column to this publication.

Originally built in 1920 as a vaudeville venue by J.W. Flood and his wife, the theatre was designed by renowned Nevada architect Frederic DeLongchamps and initially held seating for 1,150 people in a single auditorium with a balcony. Over the years the theatre has undergone several changes with the auditorium being split in 1984 to create two theatres to provide more diversity in movies.

During the meeting, with over 50 people in attendance, the Board of Directors including Richardson, Karla Kent, Star Olsen, Glen Perazzo, and Nancy Upham, was re-elected, along with new board member Jessica Huckaby. The Board will now kick off a sustaining membership drive in hopes of building the membership base to at least 300 and raising enough money each month to keep the overhead covered and pay for the movies they show. Memberships begin at $20 a month. The group will send letters out soon to the community providing the information about joining the efforts to preserve the theatre for another 100 years, or anyone interested can call the theatre at 423-4454.