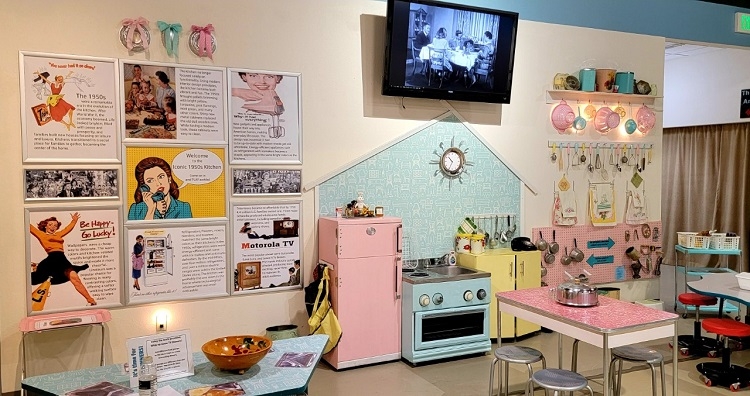 Jo Petteruti Fully stocked kids-size kitchen filled with things to play with.
A cool exhibit in the Churchill County Museum where kids can interact in a fully stocked 1950s kitchen

There's a cool space in the Churchill County Museum where kids can interact in a fully stocked 1950s kitchen complete with appliances, tables and chairs all in their size, plus period wall hangings, and black and white television shows. It's the perfect place for spending time with your kids or grandkids, especially with spring break coming up.

Gretchen Felte, Education Curator at the Museum came up with the idea a few years ago with Dan Ingram, Museum Director at the time and who has since passed. “I toured a Children's Museum in St Louis, and inside there was this wonderful little city. It had a post office where the kids could deliver mail to places in the city, which had a store, a house, a television place, and a newspaper place where they could actually run prints. We were there for hours, and my kids just loved it. So that provided ideas for this kitchen, especially because of the experiences I had with my children spending time there together. Parents will come out with some silly stories too, about the things they did when they were that young age, and the laughter that comes about is contagious. That's one of the biggest benefits for me, hearing people's stories. Our community, our stories. The joy and the laughter. One little boy just came running down here giggling the whole way. He was delighted.”

Gretchen went on to say, “This was so fun to do. It took about three weeks to actually set up the kids' kitchen in the Museum, but that was after a few years of thought, and collecting things I wanted to see in there.” She refers to that as collecting with a purpose.

“The wall panels tell all about that time period. I've had parents and grandparents come in, and they sat and reminisced about those days, remembering the TV dinners.” Kids can build their own TV dinner at one table that has an old tray painted for each seat. The kids have to find the right food pieces to fit in their trays. “Some of the food pieces are kind of disgusting, but that's how they looked to us back then. This was before fast food, and parents and grandparents can share their childhood with the kids. And that was a benefit that I didn't see coming, the history that's being shared between the generations.”

Gretchen's husband, Cal Felte owns Richard's Maytag and he was able to pull together the right handles, decals, and knobs for the appliances. The stovetop came from an old kitchenette that had actually been in use. It has two electric burners sitting right next to this little sink with an oven beneath it. Water and electricity side by side. They picked the colors and fabrics to design the layout, then Cal built the appliances, and other items for the exhibit.  Gretchen has been clever with the decorations too, with decorative, lighted hanging colanders.  “Talking this through with Dan, it was that creative thinking that he'd always challenge me with, to go further. He'd plant an idea and let me take off with it. Teri is a lot like that too, so when I did this she was amazed, and asked me to do even more.”

“I put as much stuff as I could into each area so that the kids could play with them all. The food (not real), dishes, pans, silverware, the telephone, they can play with everything. Kids don't even know to use a rotary phone these days. Some don't even believe we used phones like that, they are so foreign to them. It's a great history lesson while being fun.”

The kids’ kitchen was supposed to be a temporary display, but Gretchen said they would be holding it now until November. She's been in conversations with a couple of teachers, suggesting school trips to the Museum for the displays. “The goal is to create more hands-on displays for kids in the Museum.”

The next project for families is the “War Comes Home” exhibit that will include a letter-writing campaign for children where they can write letters to soldiers on the desks that will be set up for them. “We're working in conjunction with the Library, and I'm also trying to get in with the School District for that too. That one will be fun. There will also be an 1860s theme for the Pony Express, the telegraph, the railroad, and statehood. That will be in the fall, and we're hoping that teachers will take advantage of using it to teach Nevada history. The history is all right here, so why not take advantage of it.”

More information about the Museum, its exhibits, and its hours of operation can be found on the website, ccmuseum.org, or by calling 775-423-3677.