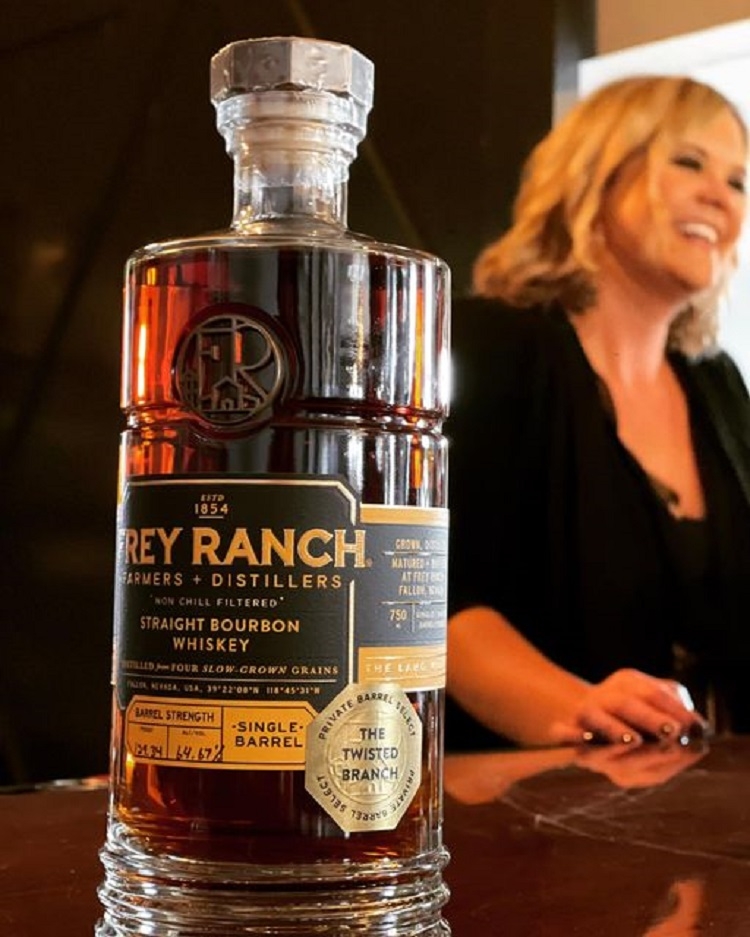 Darcie Spiro Megan behind her bar with the Frey Private Barrel Select bottle on display.

For Megan and Brad Dolan, it started about a year ago. They liked the idea of buying a barrel of Frey Ranch Distillery Single Barrel Bourbon, still aging at the time, yet also realized it could be a big risk. On Friday evening, March 18 that risk paid off in the form of an exclusive Private Barrel Select release and bottle signing they held at the Twisted Branch, with Frey Ranch owners Colby and Ashley Frey on-hand for the signing.

“We had debated buying a barrel, but we just love supporting the Freys, and we sell a lot of their regular bourbon anyway. Then Ashley approached us to see if we'd like to buy a barrel. That was pretty cool, especially because they are very selective about who they sell a barrel to, and that really keeps it unique,” Megan said.

A tasting date was scheduled with the Freys at their ranch, and the Dolans were allowed to bring eight family members and customers/friends with them. They were given a tour of the distillery and were then brought into a conference room where 10 different bourbon samples were set up for them to taste. Megan explained the process. “We all tried each one, which was interesting because everyone had different opinions. It was also shocking as to how they were all so different even though they all aged for the same four years. They varied so much. Some had a real smokey taste, others had a more botanical taste. Each one was just so unique. The way they had it set up for us was neat too with saltine crackers and water to cleanse the pallet, and coffee to clear the sense of smell.”

The group was able to get their selections down to three, but still couldn't agree on a final one, so the Freys brought them to another room for a blind taste test. “Nine out of the ten of us picked the same one, the one I chose, and that was pretty cool.” After the final selection was made, they went out to the barrel room, and everyone got to sign the final barrel chosen.

Megan said the average yield per barrel can vary from 110 to 140 bottles. “You never know until it's bottled how many you are getting out of your barrel. My barrel ended up with 144 bottles. It was perfect, and it's special too because there are only 144 of them - and they came out at 129 proof.” Their signed barrel was delivered to the Twisted Branch right along with the 144 bottles of the Single Barrel Bourbon, and once the barrel is sealed it will be kept in the events room.

Megan was ecstatic that they sold over 100 bottles during the release, and with others on reserve, they are almost sold out. “I was asked if I wanted to do a bottle limit, but I didn't want to. If someone wants to buy four bottles, they can.” Also, on hand, that evening was the band Buffalo Moses playing country guitar, and the Wild West Burgers food truck serving up their specialty treats.

Megan recommends only serving Frey's Single Barrel Bourbon neat, or on a big ice rock. “My sister was helping to tend bar on Friday, and she wanted to make a mixed drink with it. I told her 'No, no, you cannot serve the Single Barrel in a mixed drink. The mix takes away from what this bourbon is.' I even have a problem serving the regular Frey bourbon with coke or something. But everyone has their thing.”

Considering the idea of doing a second barrel, Megan said, “If they come to us again, for sure we will. Ashley and Colby are so good to work with, and they made it an easy experience for us. It just went so well.”