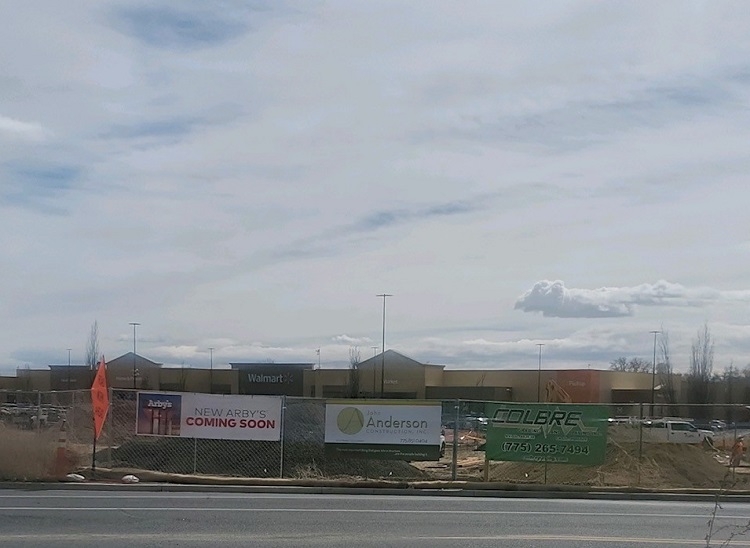 Jim Cork Arby’s is coming next to US Bank.

With the past two years of uncertainty and economic unrest, the Fallon and Churchill County economy appears to be recovering and recovering well, if the amount of recent business activity is any indicator.

Creating the most buzz about town seems to be the opening of a Boot Barn in the old Raley’s building next to Harbor Freight along with the groundbreaking of a new Arby’s fast-food restaurant next to U.S. Bank, north of Walmart. In addition, Maverick is in the process of expanding its footprint to create a bigger space for recreational vehicles to fuel up.

A grocery store is looking at the space next to Boot Barn but is still in process of trying to cement that deal and will make an announcement as soon as they have taken ownership and received necessary permitting.

Several months ago, Frito Lay went before the Churchill County Planning Commission and received approval to build a distribution facility on the corner of the Reno Highway and McLean Road and that facility is currently under construction.

Last week EnviroSafe Demil LLC held a groundbreaking at their facility north of town where they will perform Small Arms Ammunition demilitarization services for the Department of Justice, and the Bureau of Alcohol, Tobacco, and Firearms. The company was also awarded the U.S. Army Conventional Ammunition Demilitarization project worth an estimated $110 million over 5 years. They will employ 60 people in “green demilitarization technology careers.” They are considered the clean alternative to open burning and allow for the recycling of materials through the demilitarization process.

The Dahl’s Pharmacy building located at 1870 W. Williams has been purchased by ATN Properties, LLC which is owned by Cari Norcutt. Although not ready to make an announcement on plans for the building, Norcutt is the Broker/Owner at Berney Realty and says an announcement will be forthcoming once plans are finalized.

Recently there have been several boutiques and small businesses opened on Maine Street including the International Market, No Filter Fitness, Free Bird Lifestyle, Just in Time Tux, the Sarah Brooke Berg Co., as well as across town Rise Pilates Studio, Los Gallos Restaurant, and Great Basin Apothecary.  The Creative Mark-it building on Maine Street has been purchased and sources say that space will become a new restaurant.

The Rafter 3C Arena is set to be completed late this spring and a community grand opening is planned for June 1. The purpose of the building is to attract events to the community, bringing in large groups of people over three or four days who will spend money at local businesses. . Jim Barbee, county manager announced at the county commission meeting last week that the PRCA had decided to hold a national event -- the Fallon Bronc Battle the week before the Reno Rodeo in June, with a purse of $28,000.

In addition, the City of Fallon recently approved changes to the New River Business Park located off Harrigan Road and is marketing four of the parcels in that area for light industrial or medical facilities that will provide local jobs. Additionally, the Churchill County Commission approved last week a request by Hiatt Land & Development Company to divide the property on Enterprise Way east of Rattlesnake Hill into four parcels and begin developing their industrial park.

NAS Fallon has announced plans to expand over the next couple of years leading to an increase of nearly 1,000 jobs by 2024 and creating the need for even more housing. They recently released a needs assessment of their housing inventory and after the recent construction and renovation of base housing are still short 190 housing units.

Several housing developments are currently under construction in the City limits and others are being proposed, which will help to ease some of the local housing demand, however, that gap remains large.

Although the community only has 501 hotel rooms, there has not been any talk yet of building any new hotels, although as the events begin rolling into the Rafter 3C facility it is anticipated that the demand for rooms will increase.

According to Sherry Weideman, Churchill County Comptroller, sales tax continues to be up each month from the year before, and year to date is 3.74% higher than 2021. Commission Chairman Pete Olsen said during the recent Regional Transportation Committee meeting that funds are up 13-15%. “The gas tax income is looking pretty good,” he said.

And lastly, in a sign of true prosperity, the Nevada Department of Transportation has begun resurfacing the highway and upgrading sidewalks in a priority project from Allen Road to Rio Vista through the middle of Fallon. The project is expected to run through the late summer.