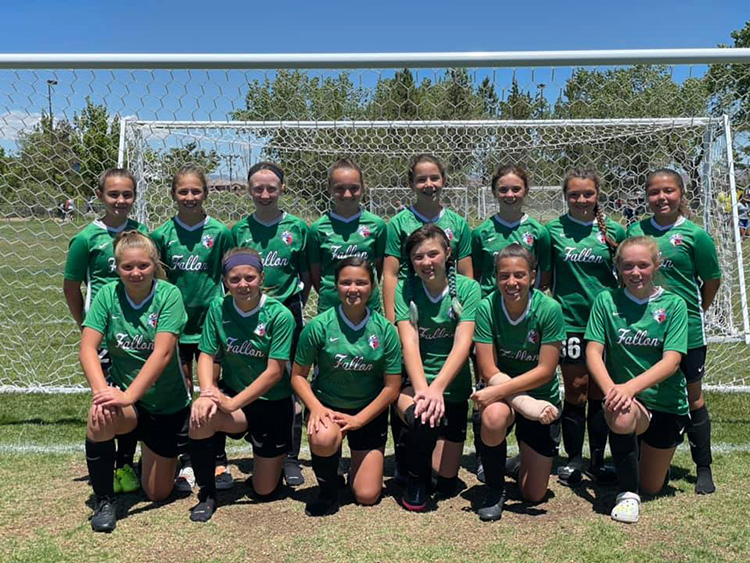 Having coached high school soccer in both Yerington and Fallon, Miguel Orduña knows what a player entering high school must be capable of. He also knows that high school teams can’t compete with the traditional powers in Northern Nevada with players who only play the sport three months a year.

That’s the reason he started the Fallon Vipers, a competitive girls U13 soccer team that competes in the Sierra Nevada Fútbol Club. He actually started the club two years ago as a U11 team with just five players, but the group has moved up a division as the players and currently has 13 players.

Now in the third year of the program, the Vipers finished in third place this fall, after a second-place finish in the spring season.

In addition, they play at an indoor at Reno Sportsdome throughout the winter to continue to get touches on the ball and maintain their fitness. “It’s been pretty good growth and how well this team is bonding and working together and playing with very competitive teams throughout the year,” Orduña said.

Many of the players were between 7 and 9 years old when the program started, but he said they have been able to increase their understanding of soccer and their skill tremendously. “We have become a very disciplined team,” Orduña said.

When they practice, Orduña said, the team works on understanding the game, not just in running drills. “Drills are like obedience training, but we’re teaching them how to play, how to be smart players,” he said.

Orduña also preaches skills, mindset and opportunity as the three things that have been instrumental to the program. “Our skills and our mindset will create our opportunities,” he said,

Ultimately, Orduña, who is a firefighter for the Truckee Meadows Fire Protection District, said the ultimate goal of the program is to prepare the girls to compete in high school. Many of the players will be entering eighth grade next year.

“We want them to be varsity quality as freshmen,” he said.

Orduña and assistant coach Karla Craig would like to expand the program, adding a U10 or U11 team. He acknowledged that the program is not for everyone.

“We are a competitive team, not a rec team,” he said. “If your daughter loves the sport, and wants to be able to compete and challenge herself, we have that for them.”

And as they grow, he would also like to add a boys team.

“It would be awesome to get some boys on board,” he said. “We’ve shown to ourselves and our families that we have developed and been competitive.”