The Vaccine or Your Job: Some Nevada State Employees Must Decide 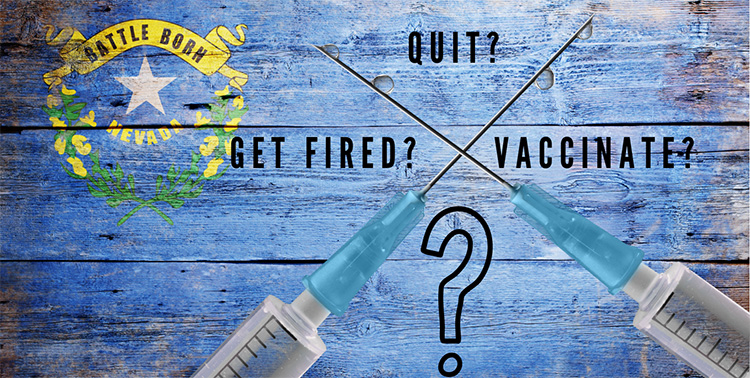 The November 1 deadline is upon us. As of Monday, all state employees who work for the Department of Health and Human Services (NDHHS), the Department of Corrections (NDOC), and those employed in state-operated institutional settings must provide proof of COVID-19 vaccination. And with that deadline comes some discouraging – even troubling, penalties for non-compliance.

Governor Sisolak issued a press release on September 15, pronouncing, “State of Nevada employees who work with vulnerable populations in state-operated, licensed health care settings or state-operated detention facilities to be fully vaccinated against COVID-1 by November 1”. Sisolak’s statement followed a 4-0 vote from the Nevada State Board of Health (BOH), which amended the Nevada Administrative Code (NAC) 441A.120, which governs infectious diseases and recommended the directive. The penalty for failure to ultimately comply with this regulation is job termination.

What is not commonly known is that the Nevada Board of Health has been granted certain powers within Nevada Revised Statutes (NRS) to govern the control of infectious diseases. By statute, this authority may exist outside of the governor’s emergency or executive orders. These powers include determining, investigating, and reporting diseases that may be communicable. Also, they are to “ensure that any testing, treatment, isolation, or quarantine of a person or a group of persons is carried out in the least restrictive manner or environment that is appropriate and acceptable under current medical and public health practices, (NRS 441A.120.e). Many organizations and individuals are asserting that the vaccine directive conflicts with that regulation. Until now, no medical or public health practice has forced medical treatment upon adults against their wishes. Also, in apparent opposition to the regulation is NRS 441A.530 regarding the right to refuse treatment and not submit to involuntary treatment; pursuant to statute, a person has the right to refuse treatment and may not be required to submit to involuntary treatment without a court order.

Although still an issue of debate, it has been legally determined that the federal and state governments cannot mandate vaccines for the general public per se. However, employers may and even must, when employing 100 or more people, thanks to new and unprecedented authority granted to the Occupational Health and Safety Administration (OSHA). The matter becomes even more complicated when a governing body, like the State of Nevada, is also the state’s largest employer. As an employer, the State can legally terminate employees that fail to comply.

This fact has created great concern for many of Nevada’s correctional officers that work in regularly understaffed prisons. With the vaccine mandate, there is the potential for high numbers of officers to be placed on administrative leave, be terminated, or resign. During the September 10 BOH meeting, several mandate opponents urged the Board to consider this potentiality. Mike Donte, who has been with NDOC for nine years, stated that at High Desert Prison (which houses 3,500 inmates), approximately 75 percent of officers are not vaccinated. “So, if they [NDOC] says ‘ok you don’t have a job anymore,’ 75 percent of your workforce is gone,” said Donte, “That means the National Guard is going to have to run the prison, and that is going to be a mess itself. Nothing’s perfect; it is like the smallpox vaccine. Everyone that I know in the military that took the vaccine has not gotten smallpox. People who have taken the COVID vaccine are still getting it. If 75% of the people have questions about the vaccine and are not sure whether they want to take it or not, that has to be brought up to you.” The Board stated that it considered this and believes that most State employees will “do the right thing” and ultimately vaccinate because they have chosen to be public servants.

The vaccine mandate also extends to private contractors working in state-run medical, institutional, and correctional facilities. It is being argued that private contractors cannot be forced to vaccinate as they are not technically employees of the State. However, the State can simply elect to terminate the contract or services and select vaccinated contractors.

While there is an option for medical or religious exemptions, there will be a price for those that request them. According to the emergency directive, an exemption must include the basis for the accommodation request with supporting information. Further, employees subject to this section may place the employee on administrative leave or receive a temporary change of duty location while an accommodation request is pending review. The document does not define “supporting information,” nor does it specify if the administrative leave is paid or unpaid.

In 2019, many state employees unionized and became members of the American Federation of State, County, & Municipal Employees (AFSCME), Local 4041. As with most union agreements, which outline both employer and employee rights and responsibilities, workplace health and safety is a negotiated item that both parties must adhere to. The issue of vaccines has not been bargained and was not part of the AFSCME collective bargaining agreement that went into effect July 1, 2021. Historically, employers cannot make changes to employment conditions outside of these contracts where they exist. However, the terms of employment have changed, and at present, the only recourse for employees that elect not to vaccinate is to file a grievance with their department, which may prove difficult if they are terminated.

As the law presently stands, there is no legal recourse if an individual has an adverse reaction to the COVID-19 vaccine. All three vaccines still fall under federal emergency guidelines (EUA), including the FDA-approved Pfizer vaccine. That means that the pharmaceutical companies that make the vaccines cannot be sued in case of bodily harm or death because it is up to the individual to decide whether or not to vaccinate. There has been no legal conclusion as to whether or not a governing agency will be liable when an employer requires vaccines should there be a serious reaction or even death.

Many state employees support the vaccine and its benefits. Despite this, some have taken steps to show solidarity with those that have elected not to vaccinate. They are saying it is not the vaccine they oppose, but the idea of the government overriding personal medical choice and mandating what someone must put in their body.

For certain state employees who are opposed to receiving the vaccine, the choice is clear; to quit or be terminated. They are no longer asking whether or not State officials can force vaccinate their employees, but rather, should they?

Anonymous 2021-10-29, 06:37 PM There are plenty of jobs at local warehouses, just won’t get insurance or paid time off or PERS retirement. You have to weigh how important benefits and being treated like a human are to you. Otherwise, trek to TRIC with all of the commoners lugging heavy stuff in long, mind-numbing shifts. Decide wisely.