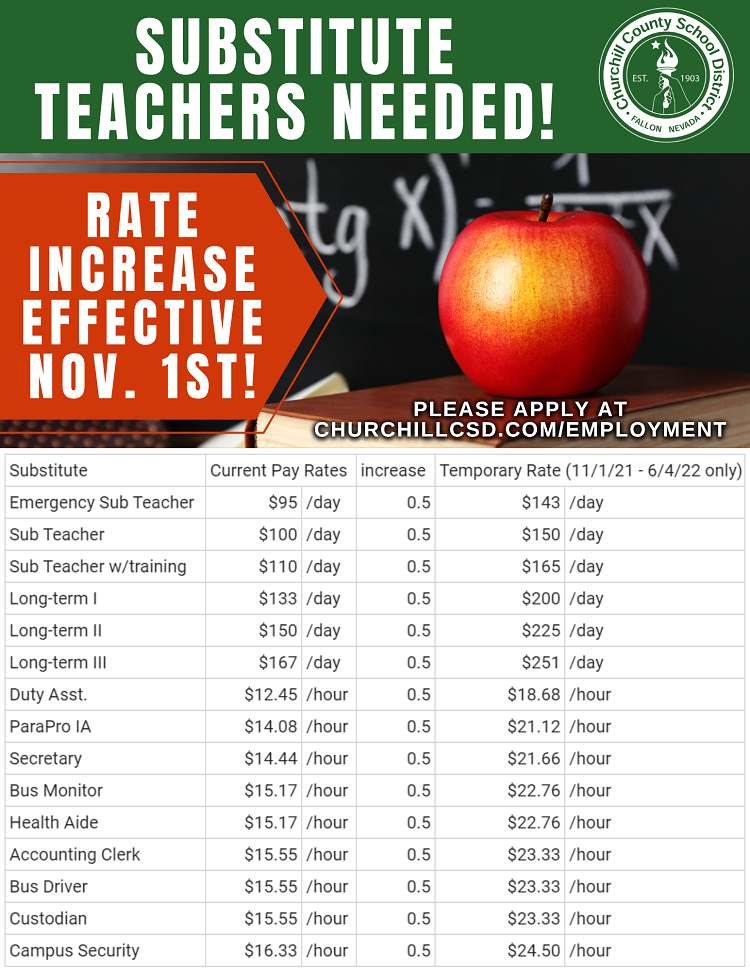 In an effort to encourage, cajole, and in the age-old custom trade someone’s time for money, the Churchill County School District announced in a public campaign Wednesday night that the rate of pay for all substitute positions in the district will be raised beginning November 1.

During the school board meeting last week, Superintendent Summer Stephens reported to board members that everything is being done to attract help that she and staff can think of. “We continue with the driver shortage, and we continue to use everyone possible and are getting ready to do some additional training of some maintenance staff for driving,” she said. “We appreciate everyone’s flexibility to make this work from teachers and parents when schedules change to coaches and staff who are driving to accommodate and get everyone where they need to go.”

She said they are also asking the base at Naval Air Station Fallon if there are any enlisted people who would be willing to drive when they are not on duty, as well as attending a recent job fair, which was not successful in terms of recruiting.

According to Stephens, the district has pushed out requests for subs for all positions from foodservice and office staff to custodial and teaching. “We are experiencing a shortage in every position,” she said. “We are increasing the rate of pay in hopes to find people who would have an interest in doing some of those jobs. We are trying lots of tactics.”

All existing staff has been opened up to fill substitute custodian positions, classified employees have been approved for overtime, and licensed staff rate of pay has been adjusted to accommodate those willing to pitch in when subs are needed.

“It is making a difference,” said Stephens, “but it is not ideal. None of this is ideal.”

Trustee Kathryn Whitaker, in her position on the Nevada Association of School Boards, recently attended a Western Regional meeting of state school boards where much of the discussion centered around the lack of potential employees across the country. “One state was in discussion with their governor to call out the National Guard to drive school busses because of the shortages. This is a nationwide issue.”

Stephens said a recent Ed Week article explained reasons for the shortages, citing fears over health and safety, frustrations over pay gaps and inequities, and political disagreements over masks and vaccines. https://www.edweek.org/leadership/no-bus-drivers-custodians-or-subs-whats-really-behind-schools-staffing-shortages/2021/09.

Other recent analysis of worker shortages includes an aging workforce as baby boomers continue to retire in massive numbers, as well as an overall decline in the general population of available workers as birth rates have declined over the past 40 years.

The district will use ESSER II funding (Elementary and Secondary School Emergency Relief) which is a part of the CRSSA (Coronavirus Response and Relief Supplemental Appropriations Act), a federal stimulus bill that was passed by Congress in December of 2020 to provide $81.88 billion in support for education in addition to the $30.75 billion provided through the Coronavirus Aid, Recovery, and Economic Security Act (CARES) funding that was approved during the spring of 2020, to cover the increase for district subs, and the increased rate will expire June 4 at the end of the school year.

“At this time in the district, we have existing employees of all areas working overtime, working to cover as subs in the classroom, as bus drivers, and custodians, so we are in a critical situation,” said Stephens. Nearly every day at the high school several classes of students are parked in the lunchroom and supervised by whoever is available because of the shortage of subs to cover classes.

In addition to increasing the sub rates, Stephens said the district provided all existing staff, including bus drivers, a stipend this year of either $1,000 (subs who worked 500 hours or more last year and new staff) along with $1,500 for returning employees in all areas. Bus drivers who returned and who were new got an additional $2000 this year (paid out in September and again in December). These funds came from the ESSER II Federal Relief funds. “We are working to use these funds first and foremost for students,” she said, “but additionally to support our staff.” Which of course, is a direct benefit to students.