A Night of Comedic Madness and Music -- Coming this Saturday 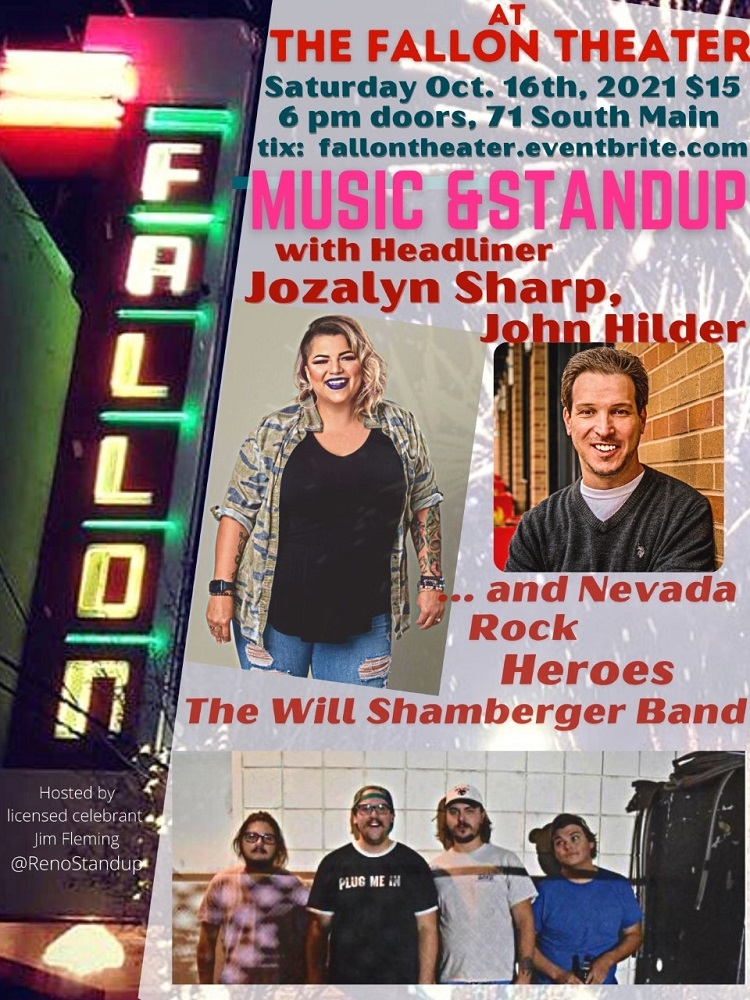 Laughter – one can never get enough these days. Add to that some rockin' good sounds, and voila – a night of comedic madness and music comes together this Saturday, October 16 at the Fallon Theatre when the doors open at 6:00 p.m. Fallon's own stand-up comedian Jozalyn Sharp, Las Vegas stand-up comedian John Hilder, and a Fallon musical favorite, the Will Shamberger Band, are all ready to knock and rock your socks off.

Sharp describes herself as “a Nevada native who shares her experiences growing up in rural Nevada, and her subsequent unique outlook on the world, with audiences onstage nightly. Her stand-up is characterized by honest and unedited looks at sex, relationships, life, marriage, and her own body.” Her performance accomplishments include being a semi-finalist in the 2018 StandUp NBC comedian search, and comedic deliveries at the Denver Comedy Lounge in Colorado, Brad Garrett's Comedy Club at the MGM Grand and the L.A. Comedy Club at the Stratosphere Hotel and Casino, and at Jimmy Kimmel’s Comedy Club, all in Las Vegas. She's scheduled for a number of nightly shows in Las Vegas through November and December. For more information on Jozalyn check out: https://www.jozalynsharp.com/.

Sharps' stand-up comedy partner in crime this week is John Hilder, born in Salt Lake City, Utah he traded in his Mormon-hoods for the hoods of Las Vegas. According to Hilder's website, “he’s an up-and-coming comedian who is quickly making a name for himself as one of the funniest and hardest working young comics in America.” Hilder has performed as a member of the Las Vegas Laughs Street Team that was featured on the Las Vegas Fox television network affiliate, and according to his website has stand-up comedy shows are scheduled at the Looney Bin Comedy Club in Little Rock, Arkansas, and Wichita Kansas. For more information on John check out: http://johnhilder.com/.

The Will Shamberger Band, also a collection of local guys that banded together in 2019, will round out the Saturday show with their famous brand of metal, blues, rock, and “psychedelia” music. Shamberger's sultry voice and rhythm guitar, joined by Charlie Gomes on lead guitar, Stone Suess on drums, and Jesse Morrow on his fretless bass, will rock the crowd with cover and original songs. Songs from their recent album titled 1020, including a particular favorite called Cactus Wine, will be performed along with their newest song release called Know No Better. Find out more information on the band check out: https://www.thewillshambergerband.com/.

Tickets for the show are $15 per person and are available when doors open at 6:00 p.m., or they can be purchased in advance at fallontheater.eventbrite.com.

Jim Fleming 2021-10-16, 03:31 AM Nicely done! You did better than I did on research and accuracy, I had some things on my little blurb that were out-of-date. This show will absolutely rule. When the Will Shamberger Band finishes their last encore around daybreak Sunday morning, I predict people will leave dehydrated but spiritually satisfied.