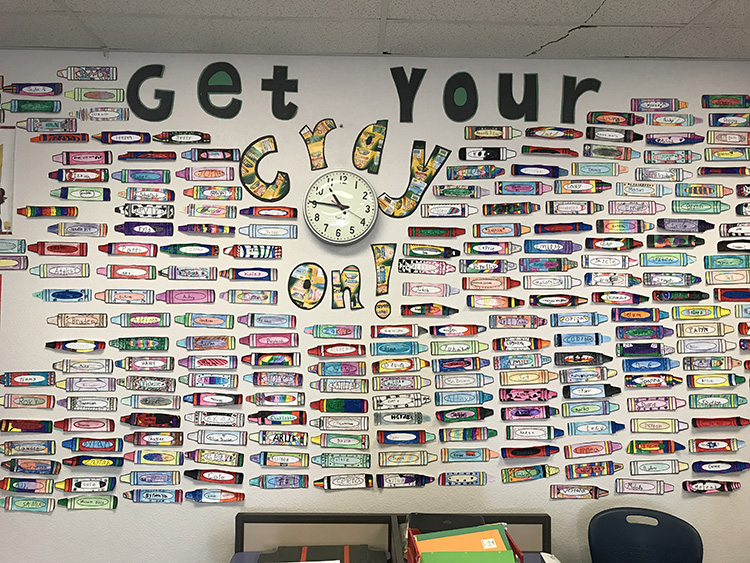 Robert Perea The Crayon Wall in Jeremie Sorensen’s art classroom has each student’s name on a decoration of a crayon, which Sorensen said gives each student a feeling of ownership.

As the new art teacher at Numa Elementary School, Jeremie Sorensen wasn’t sure how many visitors to expect to her classroom when the school hosted a parents’ night to celebrate the start of the new year.

For the first time in several years, using funding from the Coronavirus Response and Relief Supplemental Appropriations Act, the school district has been able to reintroduce art, music, and physical education, called "specials," into its elementary schools.

Sorensen, who taught kindergarten the past six years, has two years left until retirement, but near the end of last school year, another teacher told her that specials were being brought back and that she would be perfect for the new position as art teacher.

“I have two years left in my career and I thought, what better way to go out than to inspire kids with art,” she said, considering herself lucky to have been chosen.

But on Parents’ Night, she figured most parents would want to spend their time getting to know their child’s regular classroom teachers, and she didn’t expect more than a trickle of parents to visit her room throughout the evening. Instead, she ran out of room on the signup sheet she put out and had to use the back of the page to fit all the names of the parents who came to check out what her class is all about. That’s when she realized that the parents and students were as excited about having specials as she was to be teaching one.

“They love all the specials,” Sorensen said. “Obviously it’s a funding issue, but if they kept them around long enough, they’ll see kids do better on their testing skills.”

As a kindergarten teacher, Sorensen said she tried to incorporate art and PE into her regular lessons, but she said it just isn’t the same as having a full period devoted to the subject every week.

She sees every student in the school, with students divided into two groups. One group comes into art for one 30-minute period per week and the other group has PE, then the next week they switch. Because art requires a few minutes to set up and clean up, she said 30 minutes often doesn’t leave much time for projects, especially projects that take longer than one period, so the school is thinking about having each group in rotation for two weeks each.

Sorensen said she is already seeing specials make a big difference in student performance and attitudes.

“What I’m doing with these kids is that it helps with motor skills, social skills, and the ability to make decisions,” she said. “These kids need all that stuff.”

Because last school year was so disjointed by COVID-19 restrictions and distance learning, and in-person school was cut short the school year before, none of the first and second graders have been through a complete school year of in-person learning. That has them behind academically, socially, and in just understanding how school works, Mori said.

Students before didn’t have regular PE, Mori has had to spend the first few weeks of school focusing her PE lessons on playground rules, etiquette and how to take care of equipment. Except for the select few who may play club or league sports, most also don’t know the rules to games, and without organized physical activity, most of them haven’t developed their motor skills.

“I knew it would be good for them, but I had no idea how lacking in skills they were until we started playing and I realized how much they really need,” Mori said.

So far, Mori has taught the kids several different tag games, but the kids will learn how to play different sports as the year progresses. In the fall, students will be learning to play soccer and touch football, they will learn about basketball in the winter and baseball and softball in the spring, with other games mixed in throughout the year.

“We basically based our plans on the seasons,” she said.

Immediately, though, she said it was obvious how much the kids love coming to PE and learning new games, and during recess she sees students organize different tag games, such as Thunder and Lightning, that they’ve learned in PE.

“Every morning they anticipate what skills they will learn in PE, music and library. It’s exciting to see them use the rules or skills they learn at PE during recess,” said third grade teacher Monica Mayfield.

With PE, music and library, EC Best students get three specials per week.

Adding specials is benefitting the students in other ways, as well.

When their students are at specials, classroom teachers are assisting in other classes for interventions or to co-teach, which gives individual attention to those students both who are ahead of grade level and those who are behind. Mori said the teachers benefit from that mentorship and collaboration as much as the students do.

“It’s never a bad thing to have more collaboration,” she said.

Sorensen said she considers these years as an opportunity to demonstrate the value of art, music, and PE to a student’s complete education.

“Even though I have two years left and this is a two-year opportunity, I hope somehow they find way to keep funding this,” she said. “I hope we can show it makes a big difference.” marc_mr
A great person and neighbor. He will be missed.

Ron Anglin
I’m sad to hear of a great person as Alvin. We had many talks over the year both spiritually and...

Richard
How about setting up a camera were the majority of the carts being left and prosecuting the people that are...
Hot topics
3
Fallon Tribe Announces the Passing of Former Chairman Alvin Moyle
2022-06-22, 08:21 PM
2
The Safeway Shopping Cart Saga Continues
2022-06-21, 05:18 AM
Contact us
Fallon Magazine - read online!