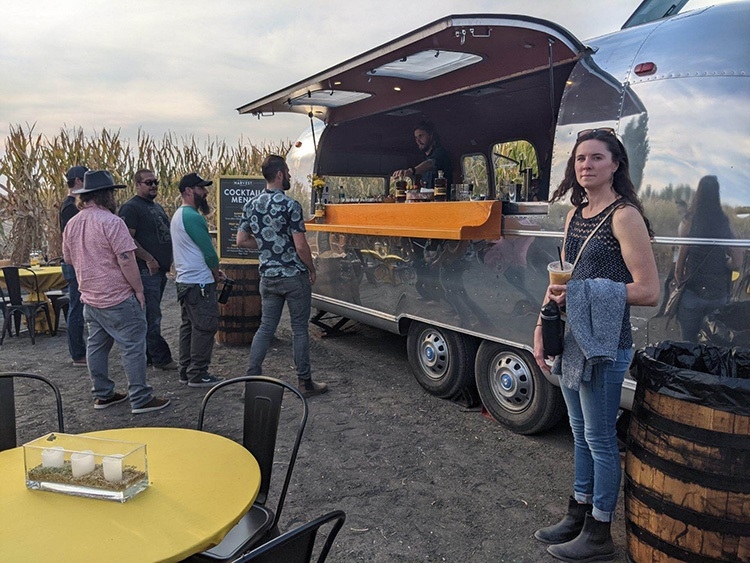 Luke Bryan has gained himself lots of acclaim with his pronouncement that “Rain makes corn, and corn makes whiskey.”  But for Colby and Ashley Frey, the connection between water and whiskey takes a much more circuitous route.  Like all of our Fallon-grown produce, the Frey’s specialty grains are irrigated from water that originates as snow falling in the Sierras.  As the snow melts, it first trickles then streams into the Truckee and Carson rivers, relaxes a bit in the Lahontan reservoir before flooding into their fields.  So, a more apt description might be that snow makes corn (and barley, rye, and wheat), and then we can all “Harvest Whiskey.”

The Freys are truly farmers first.  For generations, the Frey family has cultivated high-quality plants in the Lahontan Valley.  From the moment that I first met Colby and Ashley, over 12 years ago, they have been laser-focused on turning their carefully cultivated grains into a value-added product through distillation.

This last week, I had the pleasure of attending the first “Whiskey Harvest” event at the Frey Distillery.  Alongside about 100 other guests (primarily influencers, food and beverage industry professionals, and food writers) I wound my way around the Frey property learning about their process from Ground-to-Glass.  Colby spoke extensively about their process of crop rotation, varietal selection, and on-farm methods that lead to the harvest of a bountiful stock of grain specifically chosen to make high-quality whiskey.  They plant their grains in the winter, leading to the development of deep root systems that are better equipped to absorb nutrients from the soil. They grow 2-row barley, resulting in a yield of consistently sized plump grains that malt to perfection. They carefully rotate where they plant their grains (alternating with alfalfa and other crops) to ensure that they are replenishing micro-nutrients in the soil.  Master Distiller (and certified crop specialist) Russell Wedlake calls it “common-sense sustainability.”

This same sustainable approach has led the Freys and their team to recycle, reuse, and repurpose almost 100% of the byproducts from their farm-to-glass process.  They use water from their pond to cool down their product, perhaps the most energy-efficient way of chilling, it also means they can swim in the winter.  The spent grains from the distillery are mixed into animal feed at the neighboring Oasis-Storm dairy whose manure fertilizes the Frey’s fields.  Unlike the vast majority of distilleries, the Freys utilize the “thin slop” (an acidified liquid that is a byproduct of distillation) as a soil amendment, the liquid is released into their fields neutralizing our alkaline soil.  As icing on the proverbial cake, Ashley has never thrown away an empty bottle, turning them into candles that are available for sale at the ranch.

All of this hard work and effort has yielded a note-worthy result, the Freys’ products are outstanding.  I tasted a truly exceptional single-barrel rye this last week.  While the first sip was a little fiery, my second and third sips revealed a rye that was filled with notes of butterscotch and caramel with a decadent buttery mouthfeel. Perhaps this rye barrel will be the first that they offer as a single-barrel rye release.  It shouldn’t be surprising that this rye was so tasty, the adage is that if you use great ingredients you can make a great product.  Since Colby is growing 100% of his grains at the Frey Ranch, he chooses those grains because they are quality (not necessarily because they have the highest yield, and the Canadian Rye variety he grows is no exception.

If you haven’t been out to visit the Frey Distillery lately you should 100% go visit.  I am not going to spoil the distillery tour by sharing any more of the details about the care that the Freys and their team take with their ingredients. But let me assure you, there are myriad ways that the Freys differentiate themselves from pretty much the rest of the industry.

The distillery and tasting room are open for tours and tastings on Saturdays from 12 - 4 pm.  I also highly encourage you to follow the distillery on their social media channels. If you are into super-special releases, social media is where you will get notifications about upcoming barrel events.

As for our field trip, at the first-ever Frey Whiskey Harvest, I shot corn out of an air cannon, drank cocktails in a cornfield, frolicked on a teeter-totter made from John Deere parts, helped to brand a barrel, ate ice cream churned by a hit-and-miss tractor engine, and dined under the stars on a meal cooked entirely from Churchill County ingredients.  It was a twinkly, magical night and I was so pleased to be a part of the Harvest.

In order to be labeled as “Bourbon” a distilled product must:

Be made in the United States

Include a mash bill (recipe) with at least 51% corn

It must enter the bottle at no less than 80 proof

Nothing can be added except water (to correct proof)

If you make a product that does not meet the above requirements, it can still be called a “whiskey” even if it is not a “bourbon whiskey.”

Corn Whiskey must contain at least 80% corn and can be un-aged or aged in un-charred or used barrels.

Bottled-in-Bond - must be distilled at the same location in the same calendar year, aged for no less than 4 years, and bottled at 100 proof.

Stay-tuned, I hear that the Freys will be releasing a heritage grain series of whiskeys in the next few months featuring their soft winter wheat, oats, and other limited-edition varieties.