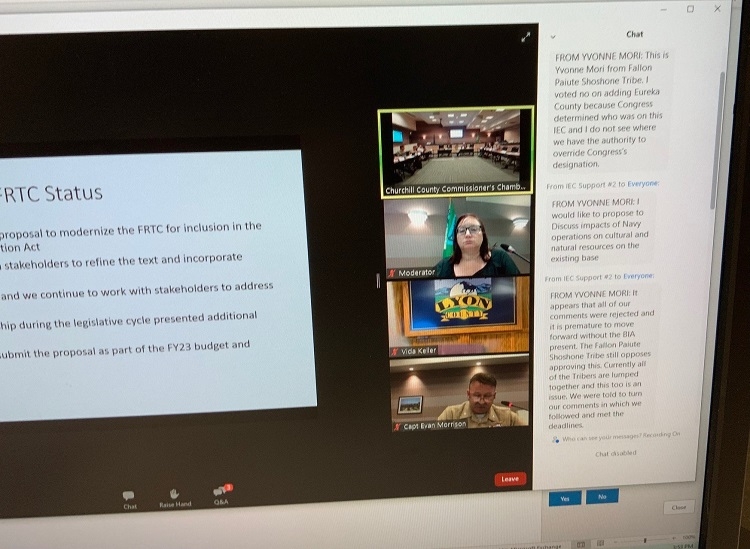 Members of the U.S. Navy, Bureau of Indian Affairs, Bureau of Land Management, Nevada Department of Wildlife, and the Department of Conservation and Natural Resources met with representatives of five rural Nevada counties, and 17 Nevada Indian Tribes recently in their third meeting to discuss the Fallon Range Training Complex Modernization.  The Intergovernmental Executive Committee was created under the 2021 National Defense Authorization Act to function as a roundtable to facilitate discussion of the natural of and cultural resources on the FRTC.

Although the Navy was not awarded the expansion of the ranges requested in the 2021 NDAA, congress recognized the importance of the FRTC expansion to national defense and directed the Navy to continue discussions with all stakeholders.

During past meetings the committee talked at length about what areas and issues are intended to be discussed within the IEC – current ranges, future ranges, airspace, other ancillary topics, passing a motion for the scope of discussion to include current withdrawal, future expansion, airspace, and interconnected ideas in a 9 to 1 vote.

For over an hour, during their third meeting, members of the committee continued discussing ground rules and organizational structure, including Version 5 of the Committee Charter and Version 5 of the Memorandum of Understanding. They also continued reviewing submitted written comments to each document.

For example, one issue of contention was a statement questioned by the Fallon Tribe, a representative of which asking that the language, “Congress recognized the importance of the FRTC expansion to national defense” be struck from the meeting minutes of the April 20 meeting. After review, it was found that the language had in fact been used during the April presentation and was then clarified with language from Section 2842 of the NDAA, reading, “The conferees note this renewal maintains the status quo of the FRTC. However, the conferees also note that with the increasing deployment of 5th generation fighters, finding a way to expand the Fallon Range Training Complex, in a manner that is responsive to the needs of all stakeholders is essential for the Nation’s tactical aviation readiness and improved ground forces training. The conferees direct the Department of the Navy to continue to work with the committees of jurisdiction, the Nevada congressional delegation, State, and Tribal stakeholders to secure a mutually-agreed-upon expansion at FRTC.”

Additionally, the committee addressed adding Eureka County and the Bureau of Indian Affairs to the committee.

Fairly far into the 2-hour 24 minute long meeting, Churchill County Commission Chairman Pete Olsen remarked on the “housekeeping” items that have taken up much of the meeting as well as the first two meetings, saying, “I know much of this is very important but if we’re ever going to get to the point where we talk about those standing agenda items and start drilling down into some of the stuff that’s affecting all of our people, whether you’re a tribe or a county, you’ve got to get through this stuff and get past it. In order for us to get to the things that we enumerated as standing agenda items we are never going to get there – I would urge we get this MOU passed, let’s talk about it, and move on. This committee has important work ahead of it and this is holding us up. We are never going to get there if we keep squabbling over ground rules.”

Navy Commander, Captain Evan Morrison gave a report on the status of the FRTC, saying the Navy has submitted a legislative proposal to modernize the FRTC, asking that the expansion be included in the Fiscal Year 2022 NDAA. (Congressman Mark Amodei did introduce legislation this week, see story at  https://www.thefallonpost.org/news/3811,Amodei-reintroduces-the-northern.) Morrison said the Navy continues to work with stakeholders to refine the text and incorporate concerns. He also said that the change in political leadership during the legislative cycle, both in the Department of the Navy and the Department of the Interior, has presented additional challenges and if needed, they intend to resubmit the FRTC expansion proposal again in the FY23 legislative cycle.

“Even though we had to get through some of these ground rules and the MOU and the Charter, we have found this IEC process to be a valuable forum for obtaining the views of stakeholders and hearing their concerns,” said Morrison. “IEC is helping to inform decisions regarding the modernizations and hopefully will address the concerns of all the tribes and stakeholders.

Ken Collum, Bureau of Land Management in the Carson District office, addressed the Land Management Evaluation, which established the withdrawal that is currently in place, saying if that withdrawal is accepted it would be published in the Federal Register for a 90-day public comment period.

Morrison also addressed Natural Resources issues in the FRTC including a Fire Management Plan, a Sage Grouse study, a hunting MOA with NDOW, an update on the Integrated Natural Resources Management Plan, and funding for one law enforcement officer over a two-year period. “There is still some discussion over whether that is going to be Navy-centric CLEOs (Conservation Law Enforcement Officer) or possibly funded through BLM,” he said.

In terms of Cultural Resource status in regard to tribes, “Since January of 2021, we’ve engaged the tribes over 160 times, of which 60 of those were in the last two months, which includes in-person meetings, phone calls with tribal leadership of the various tribes that fall within NAS Fallon, both our Tribal Liaison officer and Tribal Coordinator have done a great job with that,” said Morrison.

Chairman Arlan Melendez, of the Reno-Sparks Indian Colony, asked, “Could we actually see the 160 contacts you made as to who those were?”

The Navy will make those available.

Captain Morrison also requested from the Fallon Paiute-Shoshone Tribe, “a top-five list of their specific concerns with the current range as far as cultural and natural resources and any potential modernization what those concerns are so we can address those properly.” He asked that the list be made available before the next meeting.

A Visit with the Real Stars of the U.S. Navy Fighter Weapons School