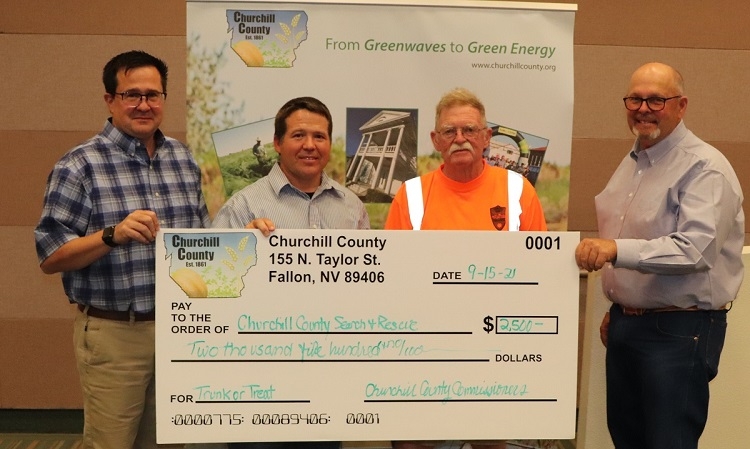 Commissioners Greg Koenig, Justin Heath, and Pete Olsen with Rick McCusker from the Search and Rescue, the organization that will host the Trunk or Treat event this year at Venturacci Park on Halloween from 5pm to 8pm

The local Search and Rescue organization will host the Trunk or Treat event this year at Venturacci Park on Halloween from 5 p.m. to 8 p.m. Rick McCusker, a retired member of the Search and Rescue made a presentation to the County Commission on Wednesday, asking for their support.

He said the group helped Ken Brown last year, who hosted the event on very short notice after the Downtown Merchants were unable to host the downtown Spooktacular that they traditionally have held on Maine Street each year.

Brown’s event was held in the Big 5 parking lot, with an estimated 6,000 children attending, according to McCusker.

However, Commissioners felt that the event is commendable, and it wouldn’t happen unless the Search and Rescue puts it on. With a total yearly budget of $20,000 for their entire operations, Commissioners approved the $2,500 contribution so that the funds for candy and decorations wouldn’t come out of the annual operations budget.

McCusker said that he was told by the Chamber of Commerce that the Downtown Merchants will not be doing the Spooktacular event, and in fact have dissolved their organization.

If enough people volunteer to help, McCusker said members of Search and Rescue drive through neighborhoods and give out lighted necklaces/glow sticks to neighborhood children.

Anyone interested in helping with the Trunk or Treat event should contact the Search and Rescue organization at [email protected].

Update from the County Commission

CWSD Water Marketing Study Results in a Plan to Plan

“If you lose your agriculture, you’ll be in a world of hurt”