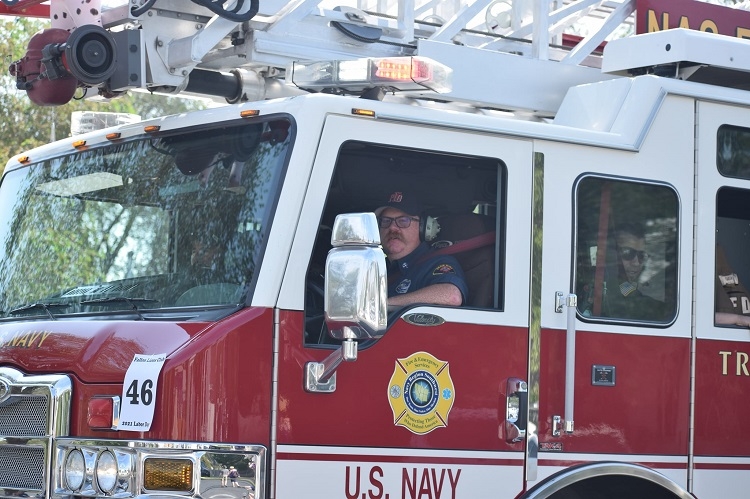 After the Twin Towers were attacked, a friend called me to tell me to turn on my TV. I was the Deputy Fire Chief for Navy and Marine Corps Military bases at Okinawa, Japan. Okinawa is 13 hours ahead of New York City and I had been sleeping. Looking at the TV, I wasn’t sure at first what I was looking at. There was fire, smoke, and papers raining down to the streets below. My first words were “we are going to lose firefighters”, but I had no idea it would be 343. In the morning, I reported for duty at the Headquarters ( HQ ) Fire Station. The Marines had sandbags and a 50-caliber machine gun at the main door of HQ. The headquarters was located on an Okinawan street and not on a military base.

That morning the Commanding General had a department head meeting. He highly stressed calling 911 operators with anything suspicious. People really took suspicious to heart. These are but a few of the many calls our Hazardous Materials Team responded too.

The first call was a report of powder coming from a package at the post office; remember anthrax was on most people’s minds back then. This call turned out to be bath salt.

A legal officer ordered a book on Al-Queda, when he opened the package dust fell out of the book. I called the seller of the book back in the United States and found the powder was to keep pages from sticking together.

A Marine opened his mail from his parents at two in the morning and reported that there was an Arabic coin sitting on top of the inside. This turned out to be a commemorative coin from the state of New York and had in Latin something like E Pluribus Unum.

A mini-mart got a pallet of beer wrapped in plastic and had dust on it and concern that it had been shipped on 9/11. It turned out to be just dust.

An Okinawan woman drove to the main gate and while they checked, they located a bag of a white substance. In Japan salt is considered sacred, and is used to remove all spiritual dirt from an individual. She had hit a dog with her front tire.

We had a Marine Gunny Sargent who received a package from Georgia, but the return address was from someone in Korea that he did not know. Explosive Ordinance X-rayed, they saw what looked like a spring. We used a robot to place it in the middle of a field. Fired a shotgun round from the robot at it and coupons flew all over. I flashed back to the papers I saw raining down from the Twin Towers. Out-of-date coupons can be used overseas on military bases for an additional year. The package came from a church, no springs.

A middle school student saw some white powder in her teacher’s desk and reported it to her mother. Upon investigation, it turned out to be cocaine and a teacher lost her job.

And last, but these were only some of our responses, a family reported that they had opened their mail on the fifth floor of a nine-story high-rise. Their noses and lips were burning. I had the family shelter in place. We evacuated the entire building to a local gym. We brought the family down an exterior stairway to our decontamination station. The family was stripped down decontaminated and sent to the hospital. Hazmat investigated the apartment, on the kitchen table were jalapeno poppers from a fast-food restaurant.

What I found interesting was when I phoned Fire Chief friends back in the states, they had responded to one or none.

The following days I kept checking my computer to see if I knew any of the victims. Being from New Jersey, I had many friends who worked in New York at the time and some of them were firefighters. Day after day, nobody I knew was on the growing list, then one day I saw Captain Brian Hickey, of the elite FDNY Rescue 4. I can’t put into words how I felt, sick to my stomach. Brian led six other men into the North Tower. They think they were on the 73rd floor when the tower collapsed.

The next year I attended a Fire Chiefs Convention at New Orleans. After a class, I went to the hotel bar, which was empty. A fellow walked in and asked if he could join me. He introduced himself as Stu Estabo, an Assistant Fire Chief working at the U.S. Coast Guard Station on Governors Island at the foot of Manhattan. He saw the Twin Towers go down. He asked me if I knew any of the firefighters. I said one, Captain Brian Hickey. He turned white and said he was Brian’s best man when he got married. He told me they never found Brian’s body, only his helmet. Brian wasn’t even supposed to work that awful day. He made a shift trade to help out another Captain who needed the day off. Brian was a firefighter’s firefighter. He was also a volunteer firefighter in Bethpage, Long Island, where he lived and was assigned to Ladder 3. Assistant Chief Estabo and I both thought Brian had something to do with our meeting.

Every year I attend the 9/11 ceremony at the City Hall as a member of the American Legion Ceremonial Firing Squad. We fire three volleys of gunfire and Taps always brings back the memories of Vietnam and 9/11.

After you read this article please say a prayer for Brian, his family, and the other 343 FDNY Firefighters that died on 9/11.

Stuart Cook was a career firefighter and served as the Chief of the Fed Fire at NAS Fallon for five years.